Colorado‘s National Snow and Ice Data Center, which tracks sea and land ice around the world, reported that a record low Arctic sea ice extent was observed for January 2016, reports Mashable, with sea ice almost completely absent in the Barents and Kara Seas.

Unusually high temperatures over the Arctic Ocean, along with a strong negative phase of the Arctic Oscillation for the first three weeks of January kept the ice slushy, instead of allowing it to freeze. “For the Arctic this is definitely the strangest winter I’ve ever seen,” said Mark Serreze, the director of the National Snow and Ice Data Center (NSIDC) in Boulder, Colorado. 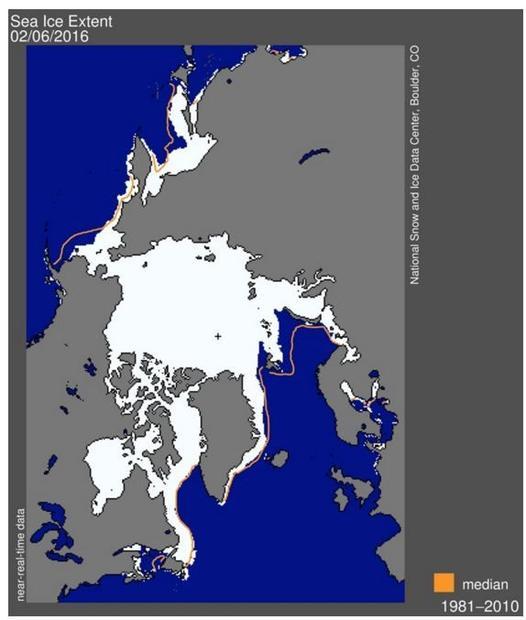 For the Arctic region, it is fair to say this has been a really weird winter, so far. On Friday, last week, New York City had 2.5 inches of snow, more than Fairbanks, Alaska. To add to the strangeness, Fairbanks set a record for the lowest amount of snow accumulation between Dec. 1 and Jan. 31 ever recorded since records started there in 1916.

The driving force behind all this was the above-average near-surface air temperatures across the Arctic Ocean. They averaged 13 degrees Fahrenheit, or 6 degrees Celsius, much higher than normal for January, reports EcoWatch. The temperatures were possibly related to the negative Arctic Oscillation, which has since returned to a positive phase.

To put the lost sea ice in perspective, think about the states of Texas, New Mexico, Maryland and New Hampshire disappearing. That’s how much ice is gone. Based on long-term trends, January’s sea ice extent loss is a decline of 3.2 percent per decade, the NSIDC said. 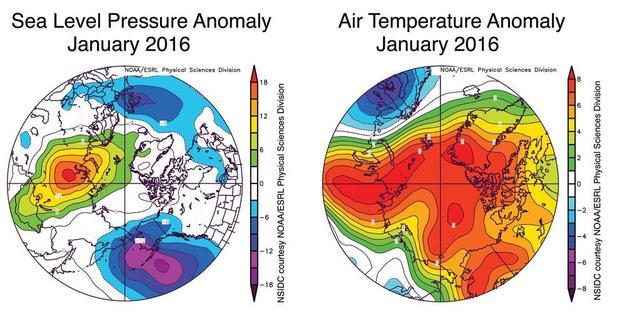 Because of man-made global warming, sea ice has been declining at a rapid rate while Arctic air temperatures have increased at twice the rate as the rest of the world. This is known as Arctic amplification. There are several things that could influence Arctic amplification, including changes in cloud cover, increases in atmospheric water vapor, more atmospheric heat transport from the lower latitudes and declining sea ice.

The strange behavior of the weather in the Arctic could be blamed on the influence of the Arctic oscillation, Arctic amplification, a warming world and El Nino, but actually, what’s happening in the Arctic is still open to speculation and needs a lot more study. For example, how El Nino is interacting with Arctic weather is still an open question.