In Canada, the federal weather agency has issued an extreme cold warning for Sunday morning as another blast of Arctic air moves across the provinces plummeting temperatures well below the seasonal mark. A wind chill of -30 degrees Centigrade ( -22 degrees Fahrenheit) will make it feel much colder, according to Environment Canada.

Needless to say, but quite a few New Years Eve events have been canceled, including many of the events in the New Year’s Eve party on Parliament Hill in downtown Ottawa, which also was going to be the end of Canada’s sesquicentennial celebrations. CBC News Canada suggests would-be celebrants check with their local media or websites to see if any activities are canceled. 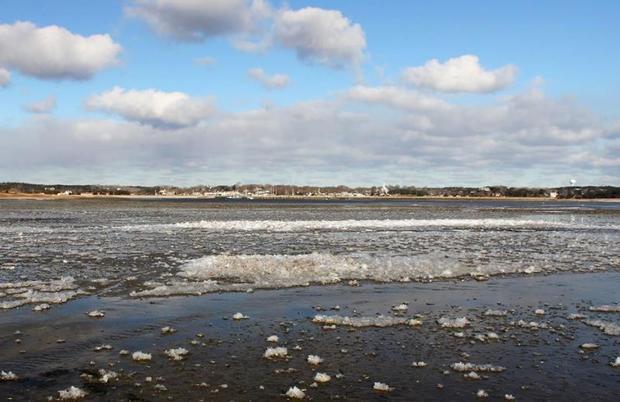 This picture was taken on December 27. Notice the ice on the beach along the Cape.
Atlantic White Shark Conservancy
The U.S. is in the same boat, weather-wise
A number of cities in the U.S. have also canceled New Years Eve celebrations or curtailed many events. Record low temperatures are expected in many areas, including Great Falls, Montana, where wind chills are expected to hit -26 below zero, or -32 degrees C. The five-foot snowfall in Erie, Pennsylvania is now solidly frozen in place, leaving many residents marooned in their homes.

Airports in New York City recorded record low temperatures, with the icy conditions resulting in cancellations of flights and many traffic accidents on the roadways. Homeless shelters have been jammed with people seeking a warm place and many agencies have also taken to performing checks on elderly residents.

Sharks succumb to cold-shock in Cape Cod
According to the Cape Cod-based Atlantic White Shark Conservancy, it’s gotten so cold that sharks in the area have been washing up on the shore, essentially freezing to death. 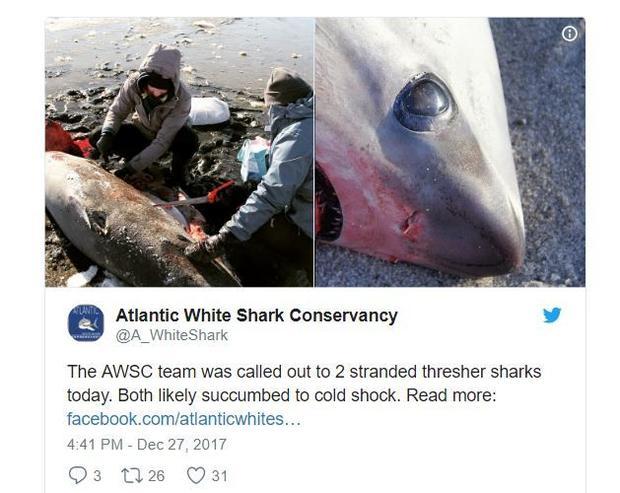 Atlantic White Shark Conservancy
On Wednesday, two male sharks were discovered on Skaket Beach in Orleans and Chipman’s Cove in Wellfleet, the conservancy’s program director, Michelle Wcisel, said in a statement. A third thresher shark was discovered on Friday in Brewster near Cape Cod Sea Camps.

All the sharks had been stranded and were solidly frozen. They apparently succumbed to cold shock. This occurs as a result of an organism’s physiological response to freezing cold water. As a matter of fact, in humans, the fatal effects of cold shock can happen faster than with hypothermia.

Scientists believe the sharks swimming off the coast of Cape Cod—where temperatures have dropped to 6 degrees suffered cold shock in the water and then wound up getting stranded on the shore, where they likely suffocated. 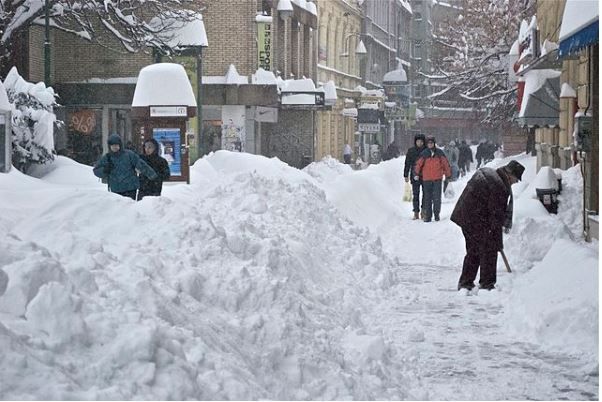 Europe under a polar deep freeze.
Dan Brickley, Amsterdam, Netherlands
“If you’ve got cold air, that’ll freeze their gills up very quickly,” Greg Skomal, a marine scientist, told the New York Times. “Those gill filaments are very sensitive and it wouldn’t take long for the shark to die.”

The Atlantic White Shark Conservancy is currently working alongside the Massachusetts Division of Marine Fisheries and the NOAA Fisheries Service to find out more about how the three 14-foot male sharks died. They are in the process of thawing the creatures out so a necropsy can be done. 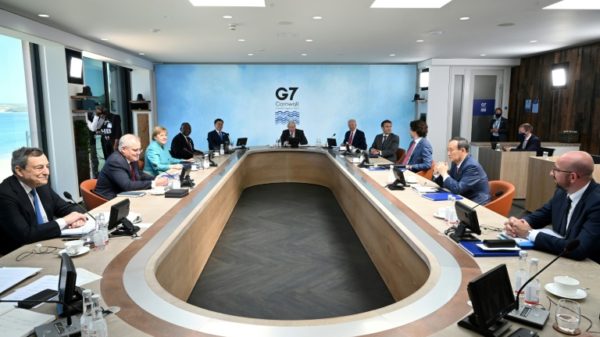