Most had never seen sunlight or received veterinary care, Humane Society International (HSI) reports. Many had been forced to birth one little after another, their owners profiting from selling their puppies. 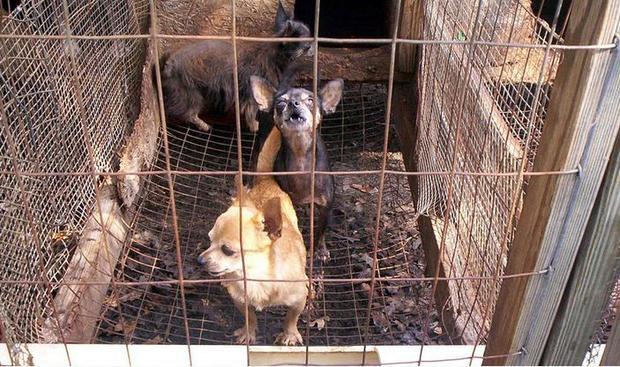 Chihuahuas in a puppy mill.
By PETA (People for the Ethical Treatment of Animals) [Public domain], via Wikimedia Commons

Many of the dogs had clearly suffered from neglect.

“Dogs were uncared for, with skin conditions and very poor conditions regarding their teeth,” Cynthia Dent, Executive Director of Humane Society International-Latin America, told Digital Journal. “There were also dogs that were too old to be bred, pregnant and some of them too young to be bred, pregnant. They also had congenital diseases, which makes them not reliable for reproduction.”

HSI has now filed a legal case against the breeders, so Dent says she is unable to disclose the location of the puppy mill, nor can she say where the dogs are now. One thing’s for sure, however — the dogs are doing better.

“We are providing medical care and follow up needed in healing their conditions,” she said.

Several people denounced the poor conditions and the health of the dogs and HSI decided to investigate.

All of the dogs were small, Dent noted, and all were going to be sold within Costa Rica.

While Costa Rica is a small country with a population of nearly 5 million people (as of 2013), it nevertheless has a huge dog dilemma. Each year, about one million dogs are abandoned in this tiny country, and the Tico Times reports that the dogs can cause problems.

Astoundingly, there are 12,000 puppy mills/farms in Costa Rica, according to The Fundación de Rescate Animal Costa Rica, and some of the cachorros (puppies) sell for as little as ¢500.000 colones ($1.00 USD) apiece, making these cute dogs affordable for the average person.

The Tico Times notes that the farms range from just a few dogs to those that may breed thousands of dogs each year. In the past, there were no set regulations or government agency to oversee the living conditions of dogs in this situation. In many of the country’s pet stores, conditions weren’t much better.

Now there are regulations from the National Animal Health Service (SENASA) regarding breeding facilities. These new regulations became law with the publication of a decree in La Gaceta, the government newspaper, The Tico Times reports here. The publication of this decree was first time Costa Rica made explicit effort to regulate dog breeding facilities.

Prior to this, all charges against puppy mills were prosecuted under a rather generic animal welfare law. Now, breeding facilities will have to meet specific guidelines in regards to space, food, exercise, and health for the dogs involved in order to be registered legally.

All of this bodes well for the dogs confiscated from the puppy mill last month, HSI reports.

“The change in the dogs’ dispositions since arriving at our shelter is incredible. They were nervous, despondent and ill when we found them, but they’re now able to go outside and their personalities are shining through. They are much more active and seem to be very happy. It’s particularly interesting to watch the ones who had never before touched the ground — some stood in place, confused, while others began playing right away.”

HSI activists found twice as many dogs as they had expected, and now they are working to make certain the dogs won’t be returned to the owner of the puppy mill. They plan to keep gathering information about the dogs’ health and their progress. This will provide evidence for the upcoming trial that shows the dogs are better off now than they were with their former owners.

If everything goes as planned, HSI will spay and neuter the pooches and work to find each of them a loving home.

“We hope that the suffering they endured for so long will soon become a distant memory for the mother dogs and that their newborns will frolic in the grass instead of languishing in cages.”

Then, perhaps, their new owners will let their sleeping dogs lie…on the grass.