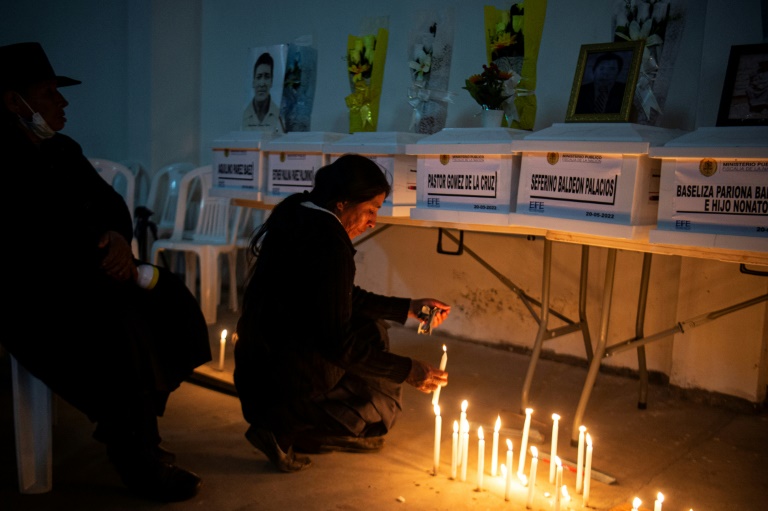 After 37 years, dozens of victims of the worst massacre in Peru’s conflict with radical left-wing guerrillas will finally be laid to rest in their Andean village following a years-long identification process.

A funeral ceremony will take place Friday in the tiny isolated village of Accomarca where its 500 inhabitants, most of whom speak only their native Quechua language, live off potato, quinoa, wheat and barley crops.

It was in this remote village at 3,400-meters altitude that on August 14, 1985 an army patrol under the command of second lieutenant Telmo Hurtado massacred almost the entire population, accusing them of being members of the notorious Shining Path communist guerrillas.

Friday’s ceremony is one step on the road to healing the wounds and was made possible by a long identification process led by the Peruvian public prosecutor’s office in cooperation with the International Committee of the Red Cross (ICRC), which has provided support to families.

The bodies were exhumed years ago from a mass grave to be identified using DNA tests.

Packaged in boxes, the remains were returned to Accomarca on Wednesday where, in the presence of grieving relatives at the town hall, they were placed into individual small white coffins bearing the victim’s name.

They were then taken to the local church by loved ones where they remained for a two-day vigil ahead of their final journey to the small cemetery outside the village.

“The pain in my heart can never be healed. What were my mother and my siblings guilty of?” Teofilia Ochoa told AFP, after accompanying six coffins into the church.

“They lined them all up, put them in three houses and opened fire with gunshots and bombs and set them on fire. Everyone was screaming, it was awful,” said the 49-year-old, who carries around with her a black and white photograph of her mother.

Ochoa managed to escape the massacre by fleeing into the countryside.

“It’s sad to lose your loved ones in this way and to cry for 37 years at their memories,” Tenencia Gamboa, 60, who lost her mother and brothers aged eight and 11, told AFP.

“It’s a huge sadness, there’s no other way of describing it,” added Maura Quispe, 52, whose pregnant mother and six-year-old sister were killed.

Around 20 children were among the victims, murdered in cold blood with their parents.

The exact number of victims is not known, but authorities say there were at least 69, of whom 42 have been identified.

“We experts have listed the Accomarca case as one of the most complex and emblematic,” forensic anthropologist Lucio Condori told AFP.

“Among the remains we have body parts, pieces of legs, thorax … there are few complete skulls.”

Psychologists have been sent to the village to provide support due to “the emotional impact of seeing the collection of their relatives’ (bones),” Milagros Quiroz, from the justice ministry, told AFP.

Peru’s judiciary began investigating the massacre in 2002 and around a dozen soldiers have since been convicted.

Known as the “Butcher of the Andes”, Hurtado, 60, began a 23-year prison sentence in 2006, having been extradited from the United States where he had fled.

“Many children can give their parents a Christian burial, but some children are still waiting because there are pieces (of bone) that have not yet been identified,” explained Accomarca mayor Fernando Ochoa, whose grandmother was killed in the massacre.

During Peru’s 1980-2000 conflict, poor Andean peasants often found themselves used as cannon fodder both by the guerrillas and the army.

Not far from the Accomarca cemetery, at the summit of a mountain, several towers remain visible that were once part of an army barracks from where the military could keep an eye on the area.

In this article:Army, Guerrilla, Peru, Rights