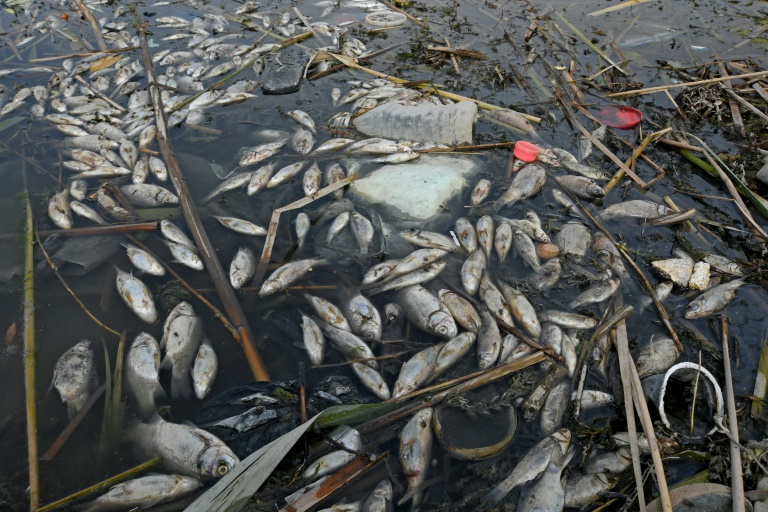 In southern Iraq, putrid water gushes out of waste pipes into marshes reputed to be home to the biblical Garden of Eden, threatening an already fragile world heritage site.

In a country where the state lacks the capacity to guarantee basic services, 70 percent of Iraq’s industrial waste is dumped directly into rivers or the sea, according to data compiled by the United Nations and academics.

Once an engineer at Iraq’s water resources ministry, Assadi left that job to dedicate himself to saving the extraordinary natural habitat, which had previously faced destruction at the hands of dictator Saddam Hussein and is further jeopardised by climate change.

The pollutants also “indirectly impact humans via the buffalo”, fixtures of the marshes and known for the “guemar” cheese produced from their milk, he said.

According to Nader Mohssen, a fisherman and farmer born in the marshland’s Chibayish district, “the buffalo are forced to go several kilometres (miles) into the marshes to be able to drink something other than polluted water”.

And “around the sewerage pipes, most of the fish die”, he added, gesturing to dozens of rotting fish floating on the marsh water surface.

Pollution is only the latest threat to one of the world’s largest inland delta systems.

The rich ecosystem, nestled between the Tigris and Euphrates rivers, barely survived the wrath of Saddam, who ordered the marsh be drained in 1991 as punishment for communities protecting insurgents.

A former regime official was condemned to death in 2010 for what the UN called “one of the worst environmental crimes in history”, although he reportedly died of natural causes in prison last year.

A few years ago, Mohssen and other marshland residents — several thousand families straddling three provinces in the rural, tribal south and struggling to make ends meet — believed they would see their home flourish again.

Once the canals and earthen dykes built by Saddam’s regime were destroyed, the water returned, and with it more than 200 species of birds and dozens of types of wildlife, some on the verge of extinction elsewhere.

Tourists too — mainly Iraqis — began flocking to the region again to take boat tours and lunch on grilled fish.

But today, the overwhelming stench emanating from the wastewater pipes keeps people away.

Local authorities say they are not entirely to blame for the lack of proper wastewater management.

They say residents are at fault for making illegal connections to the rainwater drainage systems because they are not connected to the sewerage system, while the federal government does not provide the necessary funds to the provincial council to build wastewater treatment plants.

He added that work on some units had begun, but, as often happens in Iraq, construction halted abruptly and never resumed.

For Assadi, who recently worked with European and American experts on the issue, the solution is simple and natural: use plants to clean up the marshes, in a technique called phytotechnology.

But his requests to authorities have so far fallen on deaf ears.

He underscored that when UNESCO inscribed the marshes on its World Heritage List in 2016, Iraq pledged to preserve the ecosystem and provide functional services to the marshland communities.

But today, as the UN classifies Iraq “as the fifth most vulnerable country in the world” to climate change, the rehabilitation of the marshes is no longer a question of heritage preservation, but one of survival.

The UN Environment Programme (UNEP) warned in 2019 that “climate change in Iraq is expected to reduce annual rainfall, which will lead to a surge in dust storms, a reduction in agricultural productivity and increased water scarcity”.

With each scorching summer, the country draws closer to this reality.

In 2015, every Iraqi had 2,100 cubic metres of water available per year, UNEP says, adding that by 2025, this figure will have fallen to 1,750, threatening the long-term stability of agriculture and industry in the country, as well as endangering the health of its 40 million people.

In this article:Garden of Eden, Iraq, Pollutants, Sewage