The 47-story building, that formerly stood in the shadow of the North Tower, fell fairly neatly into its own footprint at about 5:20 PM on that tragic day. Other buildings in the World Trade Center complex were severely damaged by falling debris from the Towers and remained standing. But Building 7, not damaged as significantly as other buildings, suffered a sudden total collapse, which was captured on a number of videos.

A government investigation into the extraordinary demise of “Building 7” was undertaken by the National Institute of Standards and Technology (NIST), the agency responsible for helping set building industry safety standards. The NIST report, published in 2008, concluded that floor beams, heated by fires fueled by office furnishings, expanded to such an extent that they pushed a girder off its seat, causing a cascade of floors that left a key column laterally unsupported for several floors, which then caused the column to buckle. The report claims that this column’s buckling then brought down the entire structure in seconds. 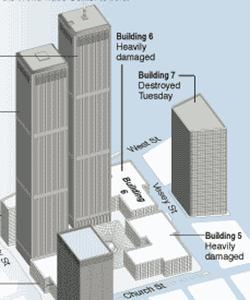 As catastrophic as these results were, NIST made no recommendations to retrofit hundreds of existing similarly constructed buildings to prevent them from suffering similar fates in the case of normal office fires.

Fifty-five AIA members who have proposed the resolution argue that, if office fires caused this kind of damage to a steel frame building, we need to be concerned about the safety of the people working and living in these kinds of buildings. Although NIST claims “more than 20 changes in the U.S. model building and fire codes have already been adopted based on the findings and recommendations from the investigation,” the concerned AIA members point out that very few of NIST’s recommendations that have been implemented relate to structural integrity in general, and none relate to the type of failure NIST says caused WTC 7 to collapse.

In an interview with Digital Journal, Daniel Barnum, FAIA, lead sponsor of the resolution, explained that his fellow AIA members and he have studied the NIST report and they do not feel confident about its conclusions or its methods. The petitioners urge AIA to take a strong position with regard to this unusual collapse and call for further investigation—so that recommendations can be made and implemented for retrofitting—or, if NIST’s findings cannot be verified by further analysis, look for other possible causes of failure.

The NIST report found that the collapse was not due to damage from falling debris from the North Tower: “Even without the structural damage, WTC 7 would have collapsed from fires. ” NIST also found that the fires were fueled by office furnishings, not by diesel fuel tanks in the building that were used to power generators. Although NIST did not test dust samples for explosive residue or evidence of incendiaries (see NIST letter and August 21, 2008 public review), they did consider the numerous reports from witnesses of loud explosions prior to the three collapse events. Their investigation discovered that in no case were these explosions loud enough to indicate conventional percussive explosives. However, none of the WTC collapse event investigations considered how loud incendiary demolition mechanisms might be.

Error found in draft, not fully addressed in final report

According to Barnum, the NIST report had originally recorded the collapse time at 40 percent slower than free fall, however, after public review, it was noted that an error had been made and the building had in fact been in free fall for about 100 feet, over a period of approximately 2.5 seconds. NIST’s lead investigator Shyam Sunder acknowledged that free fall would indicate that the falling building floors had no structural components below them to offer resistance. Free fall only occurs when all supports on one or several floors are removed simultaneously. After making this correction to the collapse time, NIST did not revise the report to explain how free fall could occur in a “progressive collapse,” where one column failure leads to another and another in an extended sequence, not simultaneously.

Furthermore, notes Barnum, NIST has refused to release the input data for their computer model of the collapse, which they claim shows how a single column failure could appear to result in total symmetrical collapse. Without that input data, building professionals cannot confirm that the model is accurate.

The AIA resolution proposed for the convention states that building failure of this kind must be investigated “using the highest standards of science-based investigation…in order to provide accurate and meaningful information in the development of model building codes.” The Resolution further proposes the following revision to the AIA’s Construction Industry Regulation Public Policy:

Current reevaluations of several other 9/11 investigations

The AIA proposition comes at a time of renewed interest in reopening several other 9/11 investigations.

Currently Representative Walter Jones (R, NC-3) and Representative Stephen Lynch (D, MA-8) are sponsoring a bill, HR 14, to declassify 28 pages that were excised by then President Bush from the “Joint Inquiry into Intelligence Community Activities Before and After the Terrorist Attacks of September 11, 2001″ Former Senator Robert Graham, (D-FL), who was chair of the Joint Inquiry, and a group of 9/11 families have been demanding the release of this information since 2003. It is believed that the 28 pages indicate that certain members the Saudi Royal family had a major role in funding the terrorist operation and that the excised pages also implicate certain U.S. government agencies in covering up these connections.

In February of this year, Ralph Lopez reported in Digital Journal on the growing awareness in the media of connections between Saudi nationals and Ptech, a company that made the security software used on 9/11 by virtually every key U.S. government agency. These agencies include the Department of Defense, the CIA, the White House, and the Federal Aviation Administration, among many others, according to former JP Morgan IT professional and whistleblower Indira Singh. The Wall Street Journal reported that Ptech’s top investor Yassin al-Kadi was listed by the US government as a global terrorist for his support of al-Qaeda at the time of the attacks. Supporters of the bill to release the 28 pages hope that it will provide more information about Ptech software’s possible role in the 9/11 tragedy. In a lengthy interview with The Real News, Senator Graham made it clear that he believes the release of the excised 28 pages is vital to national security.

EPA whistleblower Cate Jenkins, who was fired after reporting that EPA investigators had provided false data with regard to toxicity of WTC dust samples, was exonerated this week by a US Department of Labor judge, who noted that in attempting to cover up the incident the EPA committed a “fraud on the Court.” In 2001, EPA investigators falsely reported that the WTC dust did not pose a serious health threat to first responders, which led to nearly 1,000 deaths and many more illnesses.

FBI whistleblower, Richard Lambert reported to the New York Times earlier this month that the investigation into the 9/11 anthrax attacks that killed five people was improperly handled. He stated that Bruce Ivins, the accused perpetrator, who was found dead in an apparent suicide, would not have been convicted had the case gone to court. The investigation found that the anthrax incident was an “inside job” made to seem as if perpetrated by Jihadists, but according to Lambert, the accused could not have played more than a minor role and further investigation is needed.

Senator Graham, Dr. Jenkins, and Mr. Lambert have persevered these fourteen years in their desire to inform the public and to hold the government accountable when it does not conduct proper or adequate investigations. Likewise AIA member Dan Barnum says it is up to building professionals to take a strong stand in support of reopening this investigation to determine if NIST’s investigation, like other 9/11 investigations that were underfunded, rushed or mishandled, might be inaccurate in its findings and in need of reevaluation. “It seems to me,” said Barnum, “that for the AIA to not support a true investigation means that they are more concerned about politics than they are for professionalism, and that is irresponsible and unethical.”

Victoria N. Alexander is the author of Locus Amoenus, a political satire/tragedy about a 9/11 widow, her son Hamlet, his conspiracy theorist friend Horatio and his new stepfather Claudius, an incompetent bureaucrat who works for NIST.

In this article:American Institute of Architects, Building 7, wtc7