It is not just Central Americans fleeing the violence and poverty in their countries, hoping to find a better way of life in America; across the Atlantic Ocean, people in a number of African countries are also looking for the American Dream.

Record numbers of Africans and their families are flying to South America and then traveling thousands of miles of highway and a treacherous tropical rainforest to reach the U.S. border with Mexico. They are joining Central Americans, Cubans, Haitians, and Asians – all trying to get into a country that is still considered to be a haven for those seeking a safe and better life.

The situation has prompted calls from the Trump administration and Mexico for other countries in Latin America to do their part in slowing the flood of immigrants, according to Reuters.

People fleeing Cameroon usually get a flight to Ecuador where a visa is not required to enter the country. People also come from the Republic of the Congo, the Democratic Republic of the Congo and Angola. There are also Ethiopians, Eritreans, Mauritanians, Sudanese and Congolese.

According to the Texas Monthly, from June 4 to June 18, roughly four hundred migrants from Angola and the Democratic Republic of Congo arrived at the San Antonio Migrant Resource Center in Texas. During the first two weeks of June, Border Patrol says it detained 740 African migrants in the Del Rio sector. For comparison, just 211 African migrants were apprehended at the U.S.-Mexico border in all of 2018.

The surge in African migrants has taken the border patrol by surprise, while local officials have been rushing to find interpreters and adequate shelter for the migrants. For Central Americans, the processing at the center usually takes about 24 hours and then they are sent on their way, 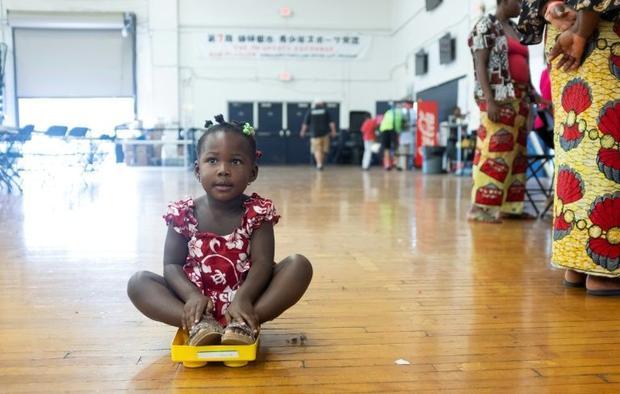 Donations for the African migrants have flooded in, including clothes, toys and even $40,000 from novelist Stephen King and his wife, who live in Maine
Johannes EISELE, AFP

However, most of the African migrants don’t have any family or sponsors in the U.S. and this makes the task of processing them a lot longer. The city and its nonprofit partners (Catholic Charities, San Antonio Food Bank, and Travis Park Church) have already spent more than $600,000 to shelter, feed, and transport migrants since the migration center opened in March.

Assistant city manager Colleen Bridger said, “We’re basically free help for the federal government, and they haven’t provided the resources or the notice to help us out.”

Many of the African immigrants are given bus tickets to Portland, Maine, as was reported by Digital Journal last month.

Quartz is reporting the immigrants are receiving a warm welcome in Maine, a state with an aging population. Portland city spokeswoman Jessica Grondin says the new residents and their children will become an important part of the next generation.

But one thing is absolutely true – For all the immigrants coming to the U.S.-Mexico border – It is a harrowing journey, fraught with danger and unending hardship. It is a journey that can take weeks and even months.