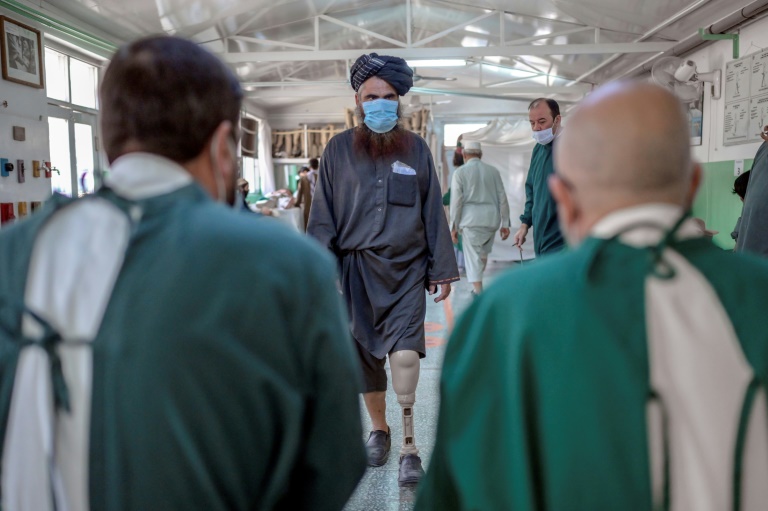 Just months ago they were fighting each other as mortal enemies, but today they are amputees dealing with their new disabilities, together.

At this Red Cross-run rehabilitation centre in Kabul, former Afghan government soldiers and Taliban fighters adjust their new prostheses, living side by side.

Khair Mohammad, a 32-year-old sergeant in the ousted government army who saw both his legs amputated in February, rests after taking his first hesitant steps between two parallel metal bars.

“The Taliban were our enemies, and I fought them when I was healthy,” said the sergeant with a neatly trimmed beard and a Real Madrid T-shirt.

“But the situation has changed,” he told AFP in the long, narrow room equipped for walk training. “The problems between us belong to the past.”

Just a few metres away sits Mullah Yacoub, a 44-year-old Taliban fighter who lost his left leg before being shipped off to Guantanamo two decades ago.

Wearing a jet-black turban and with a face mask over his dishevelled, henna-dyed beard, the Islamist insisted he was mistaken for someone else when he was sent to the US prison base in Cuba, where he spent more than four years.

Upon his return, he spent several more years in an Afghan jail.

Here, he is getting fitted for a new artificial leg.

Despite the hardship he has endured, Yacoub told AFP the Taliban “have no beef with anyone” since the movement seized control of the country on August 15.

“We have forgiven everyone and no longer consider anyone an enemy.”

The International Committee of the Red Cross, which has run this centre for more than three decades, has never questioned the affiliations of the amputees it welcomes for rehabilitation.

In a country with poor health services and where the disabled typically become heavy burdens on their families, being equipped with new limbs and learning to walk again is a privilege.

“This is an international clinic open to all,” said Mohammad, the ex-government soldier. “We all have the same problem, so we get along.”

Fahd, a 20-year-old former Taliban fighter who did not provide his last name, lost both of his lower legs in an explosion four months ago in the eastern province of Paktiya.

Wearing a traditional, embroidered cap and shawl and with a friend in tow for support, he has come to try his prostheses for the first time.

“Here, we are all equal,” he said. “There is now peace in our country.”

The Kabul centre — one of seven run by the ICRC across the country — is headed by Alberto Cairo, a charismatic 69-year-old Italian physiotherapist who arrived in Afghanistan more than 30 years ago and never left.

With his hands plunged into the pockets of his white lab coat with “Alberto” embroidered on the front, he smiles warmly at the new arrivals.

“Former soldiers, Taliban, old communists, they are all together,” he said, adding: “They talk, sit, drink tea, sometimes they take selfies together.”

Cairo, who has been mentioned in the past as a possible Nobel Peace Prize candidate for his work teaching some 200,000 Afghan amputees to walk again, said the centre was “magic”.

In over 30 years, the centre has “never had a single problem,” he said.

In the workshops equipped with a multitude of machines and tools, men and women work side by side, as they always have here.

Some are busy making moulds in plaster, pushing sheets of polypropylene into the oven to soften them and make them easier to shape. Others are adjusting the metal frames.

Together they are making simple but efficient artificial limbs that have proven their worth over the years.

“They told us: ‘Please keep working like before, men and women’,” said the doctor, who has seen five different regimes during his time at the clinic and who does not worry about the latest power shift.

“They know that they need us. Patients are patients.”

All but 17 of the centre’s 317 staff are disabled and have themselves gone through the training programme here.

“We train and employ only disabled people, because nobody wants to give jobs to them,” Cairo said.

In the walk training room, where green footprints are painted between two parallel orange lines, an instructor in a khaki blouse moves back and forth between the ex-soldier and former Taliban fighter.

He readjusts one’s prosthesis, corrects the other’s standing position, encourages and comforts, his own artificial foot visible under the hem of his trouser leg.