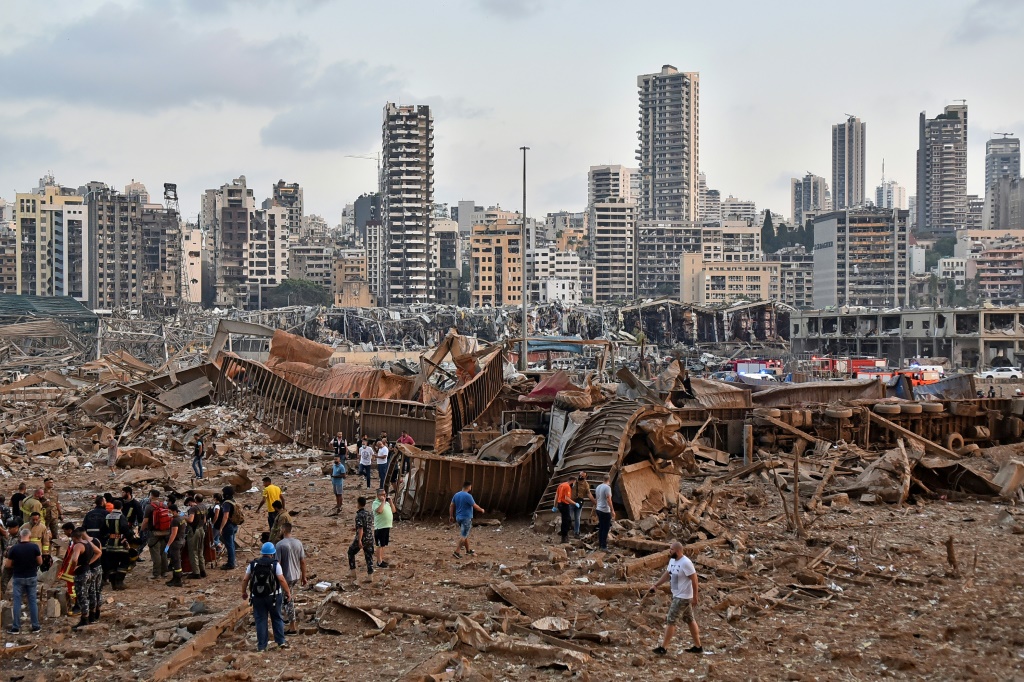 On August 4, 2020, a fire at the Beirut port ignited one of the largest non-nuclear explosions in history. It disfigured the city, took more than 200 lives and shattered Lebanon’s psyche.

The blast was felt as far away as Cyprus, and the destruction is hard to fathom. But if one thing can outweigh what happened to Lebanon that day, it is what hasn’t happened since.

Not one culprit has been put on trial, jailed or even identified. Families of the victims have received no visit, apology or explanation from those at the top. 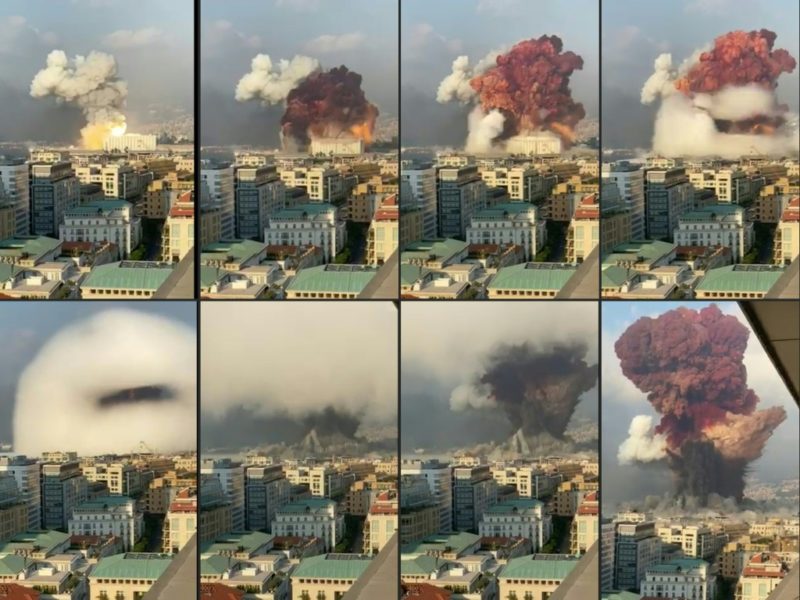 UGC footage filmed from an office building shows the cataclysmic August 4, 2020 blast at the Beirut port that killed more than 200 people. — Photo: © AFP

The reforms demanded by donors who flew to the wounded country’s rescue are a dead letter, and a new government promised last September has yet to materialise.

With a tailspinning economy, a health sector ravaged by Covid-19 and a future stunted by an intensifying brain drain, Lebanon was already well on its way to collapse before last August 4.

Yet the cataclysmic blast that shocked the world and sowed the kind of devastation caused by wars and natural disasters did not mark the end of the free fall.

“We thought that was rock bottom. How could it get worse?” Rima Rantisi, a lecturer at the American University of Beirut, remembers of the immediate aftermath. 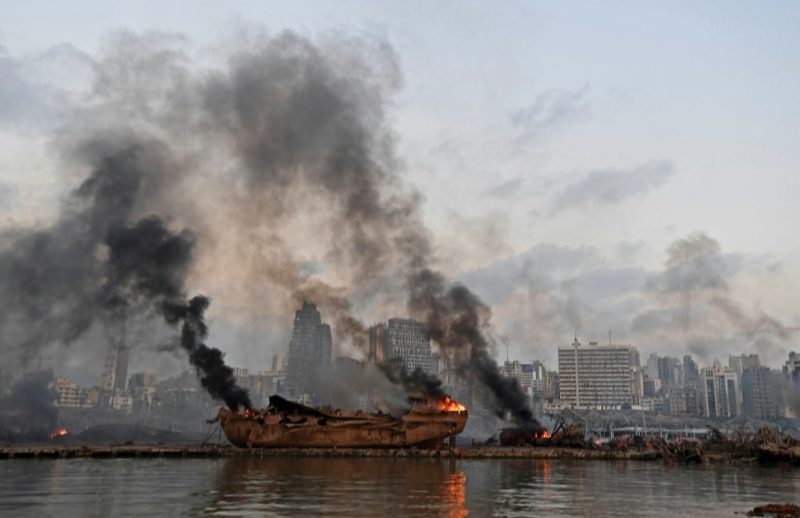 The blast took place as Lebanon was struggling with political turmoil, Covid-19 and a financial crisis the World Bank called one of the worst in modern times. — Photo: © AFP

Shortly after 6:00 pm on that ill-fated Tuesday, hundreds of tonnes of poorly stored ammonium nitrate caught fire and caused what has been described as one of the largest ever non-nuclear explosions.

Footage of the fireball erupting above the port and the white blast mushroom soaring skywards and tearing through the city drew inevitable comparisons with Hiroshima and Nagasaki.

Whatever may have sparked the initial fire, it was the chain of irresponsibility and corruption that had allowed such hazardous material to be stored so near the city centre for six years that drew the public’s fury.

“What became clear to me then, and which I have to remind myself of every day, is that the people who run the country are criminals and murderers — period,” says Rantisi. 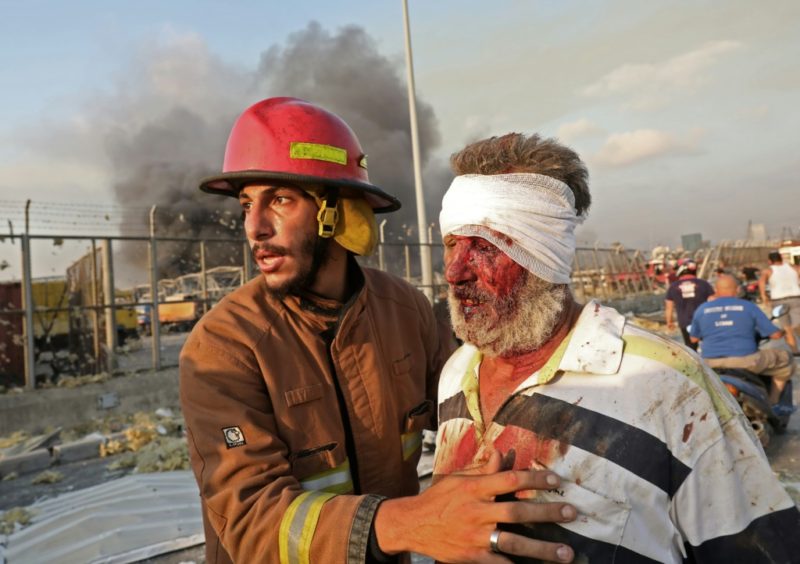 The Beirut port blast was described as one of the largest ever non-nuclear explosions. — Photo: © AFP

The blast killed 214 people, wounded thousands and made tens of thousands homeless, at least temporarily.

“After the explosion, we understood this completely: As long as they are in power, nothing will get better,” Rantisi says.

Musician Julia Sabra says she and her boyfriend are “still terrified of any sound” after moving back into their renovated home.

“The trauma, it rips you up inside,” he says. “It’s like internal crying.”

The Lebanese have had little reprieve over the past two years. 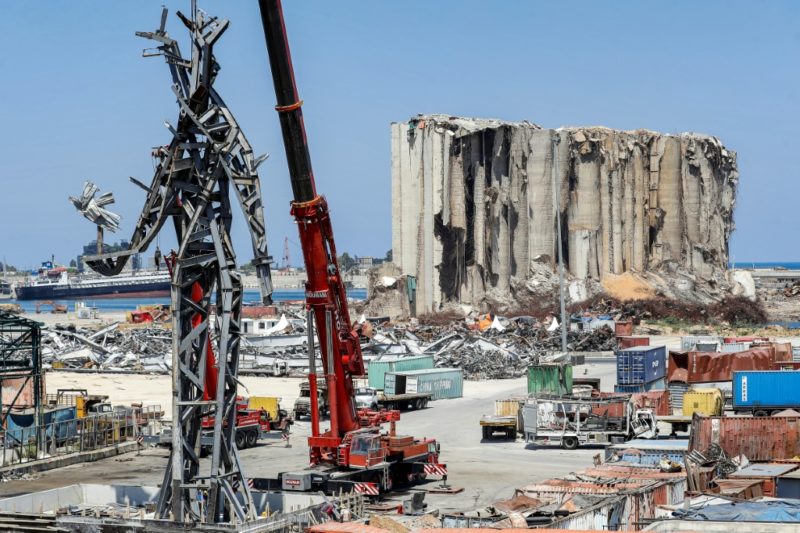 A 25-metre-tall steel sculpture dubbed “The Gesture” made from blast debris hangs from a crane near the devastated grain silos at Beirut port. — Photo: © AFP

In early 2020, coronavirus lockdowns snuffed out the last flickers of a protest movement that had kindled the ardent hope that Lebanon’s days of hereditary barons were numbered.

As financial disaster loomed, those in the know spirited their money abroad. The rest proved powerless against a crisis that stripped the Lebanese pound of 90 percent of its value and trapped depositors’ dollars in banks.

“Before the blast, the economic collapse had started, as had the health crisis,” says Karlen Hitti Karam. Her husband, brother and cousin were firefighters killed in the port inferno.

“The same people caused all of this. We lost everything. Our lives stopped on August 4, 2020.”

The public was enraged by the lack of justice, and even foreign diplomats made no secret of their disgust.

The first judge tasked with investigating the blast summoned former ministers for interrogation and was removed as a result.

His successor’s attempt to do the same was met with fresh stalling tactics by parliamentarians last month.

Volunteer work and foreign funding have allowed for some renovation, but the worst-hit areas, which include some of Beirut’s cultural hotspots and heritage jewels, are a shadow of their former selves.

Among the buildings directly exposed to the blast was the state electricity company headquarters, its gutted shell now facing the ruins of the port — in complete darkness.

After defaulting on its debt last year, Lebanon can barely provide citizens with two hours of electricity a day, and cannot afford the fuel to power generators. 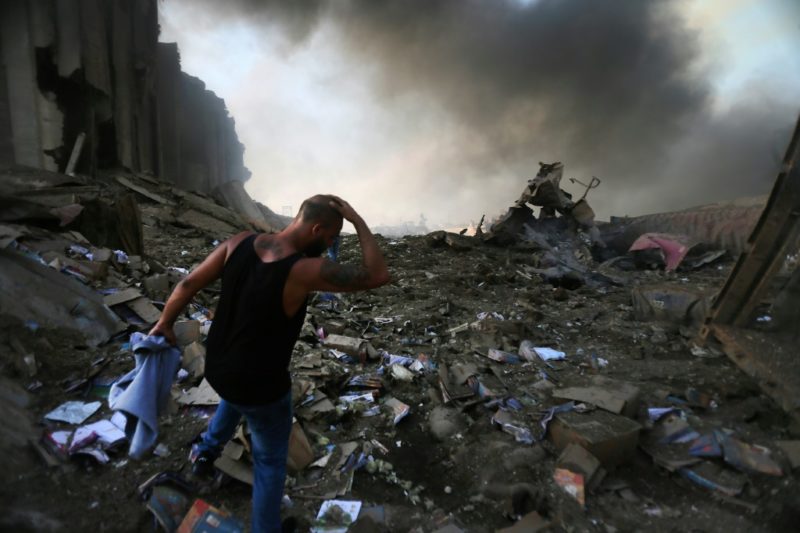 Not one culprit has been put on trial, jailed or even identified in connection with the deadly blast. — Photo: © AFP

Some who donated money to help blast victims a year ago now find themselves recipients of food and cash handouts.

“We’re in a loop. Every day we wake up to something worse than the day before,” says Rantisi.

Health officials who turned off air conditioning in wards weeks ago despite the sweltering summer heat warn that life-saving equipment will soon follow.

Once known as the “Switzerland of the Middle East”, Lebanon now has all the trappings of a failed state. Those old enough to know often argue that the current crisis is tougher than the 1975-1990 civil war.

Power cuts don’t spare the international airport, where most arrivals these days are Iraqi tourists for whom Lebanon is suddenly affordable, or exiles returning with suitcases full of medicines.

Completely unlit at night and devoid of traffic lights, the roads during the day are still clogged with endless and chaotic queues at petrol stations.

“Everyone I know is having problems sleeping, is really struggling on a day-to-day basis, holding on to whatever they have left,” says Rantisi.

Bernard Hage, best known by his moniker “Art of Boo”, has chronicled Lebanon’s shocking decline in hundreds of cartoons collected in a recently released book.

“I really see it now as a dystopia, it’s the only word I have to describe Lebanon… It’s your worst nightmare and you have no control over it,” says Hage.

Humour is the last bastion against insanity for the young cartoonist, who argues that a 2019 protest banner introducing the Lebanese as “the happiest depressed people you’ll ever meet” is more relevant than ever. 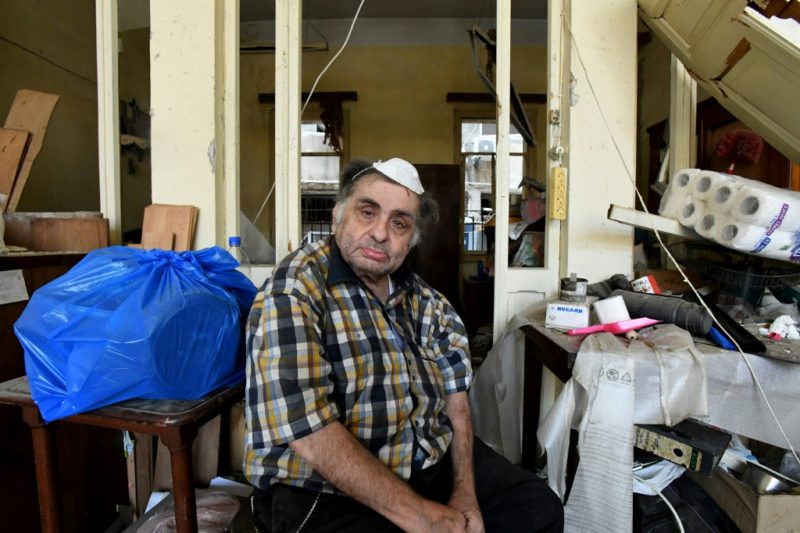 Anger over the state’s responsibility for the blast remains intact a year later. — © AFP

Lebanon is rudderless, penniless and sleepless, but for both Rantisi and Hage, not completely hopeless.

The solidarity that sprouted in the explosion’s aftermath shows that the spirit of the 2019 uprising is still at work.

Candidates close to the protest movement have swept aside traditional parties in recent trade union elections, generating new expectations of legislative polls slated for next year.

“People will find hope in the small wins,” says Rantisi.

The anger over the state’s responsibility for the blast and the victims’ determination to ensure justice is served are also intact a year later.

Hage pins his hopes on local and international pressure combining for the investigation to put at least one member of Lebanon’s untouchables behind bars.

“If this port explosion is capable of taking just one of them down, it could be the start of a series,” he believes.

“I think it will be the first domino that will cause the rest of the system to fall. This is the crack in the wall. This topic, I think it’s our only chance.”

In this article:Beirut, Explosion, Lebanon