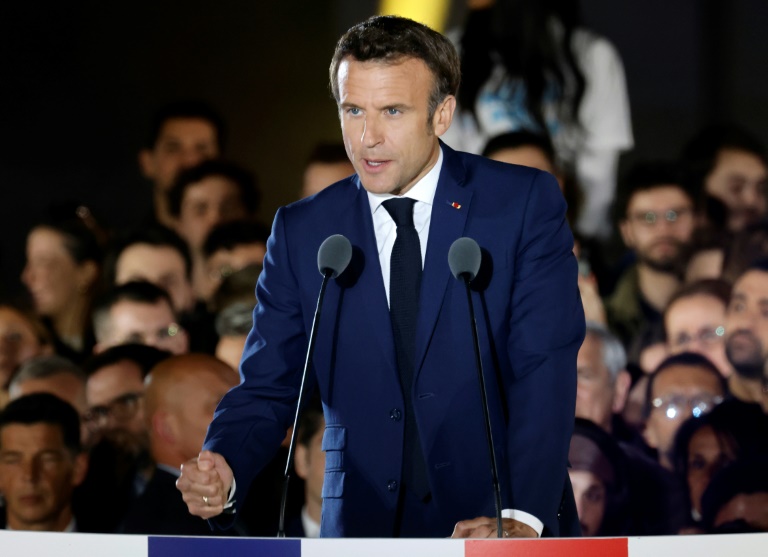 Fresh from winning a second term as French president, Emmanuel Macron soon faces another fight that will determine whether he can pursue his reformist agenda — parliamentary elections in which his rivals are looking to deny him a majority.

All 577 deputy seats in the lower-house National Assembly are up for grabs in the votes on June 12 and 19, and Macron’s Republic on the Move (LREM) party, with 267 MPs currently, is likely to encounter stiff resistance, analysts say.

“The parliament elections are going to be the true election, because getting a majority will be essential,” said Dominique Reynie, a political analyst at the Fondapol institute.

Yet two polls released just after Macron’s victory over far-right challenger Marine Le Pen on Sunday found that two-thirds of French people do not want to hand the president a parliament majority for the next five years.

Le Pen, who scored her National Rally’s highest election result ever at nearly 42 percent, immediately called on her millions of supporters “to launch the great battle for the legislative elections.”

“We already have 450 candidates lined up,” David Rachline, the National Rally mayor of Frejus in southern France, said at Le Pen’s post-election party — currently the party has just eight MPs.

Hard-left firebrand Jean-Luc Melenchon issued a similar plea Sunday by urging an alliance with Communists, Greens and the eviscerated Socialist party to form a parliament majority that would force Macron to name him prime minister.

While such a “cohabitation” appears improbable — there are only several dozen left-wing MPs of all stripes — a large bloc of deputies on the left and far right could find common cause in joining to stymie Macron’s parliamentary ambitions.

“Don’t give up. Throw yourselves wholeheartedly into action, democracy can give us the means to change this direction… the third round begins tonight!” Melenchon said Sunday.

Christophe Castaner, Macron’s party chief in parliament, accused Melenchon of playing “a dangerous game, but I’m convinced the French will want Emmanuel Macron to have the means to carry out what he was elected to do,” he told France 2 television on Monday.

Yet hostility to Macron has been a key factor in propelling the rise of the extreme right and left, and accounted for historically low turnout in the presidential run-off, when over a third of the electorate either stayed home or cast blank and ineligible ballots.

His pledge to push back the retirement age to 65 — a reform derailed by widespread strikes two years ago — has only confirmed his reputation as “president of the rich” among critics.

“Is the LREM going to secure a majority? I find this very hard to imagine,” Reynie said.

“The parliamentary vote is going to be difficult, we’re not going to see any lift” from Macron’s victory, a top official in his party admitted to AFP, asking for anonymity.

Currently, the rightwing Republicans, with 101 deputies, are the biggest opposition bloc, but the collapse of their presidential candidate Valerie Pecresse puts them in a precarious position.

While several are tempted to throw in their lot with Macron, who has called for a “grand political movement of unity and action,” others insist that staying independent is the only way to remain a viable force in a post-Macron era.

Term limits will prevent him from running again in 2027, and Republicans are hoping for a chance to revive their fortunes if Macron’s party withers without him.

Press reports say he has already struck a deal with former president Nicolas Sarkozy, who infuriated many Republicans by backing Macron in the race, to try to ensure a working majority in parliament.

In effect, the LREM would refrain from fielding candidates so that several dozen Republican MPs keep their seats, in exchange for their support in passing laws.

Since public funding of parties depends on the number of deputies, that deal could provide a lifeline for Republicans after their presidential debacle, when the 4.8 percent score was too low to qualify for having their millions of euros of campaign spending reimbursed.

In this article:France, Parliament, Vote