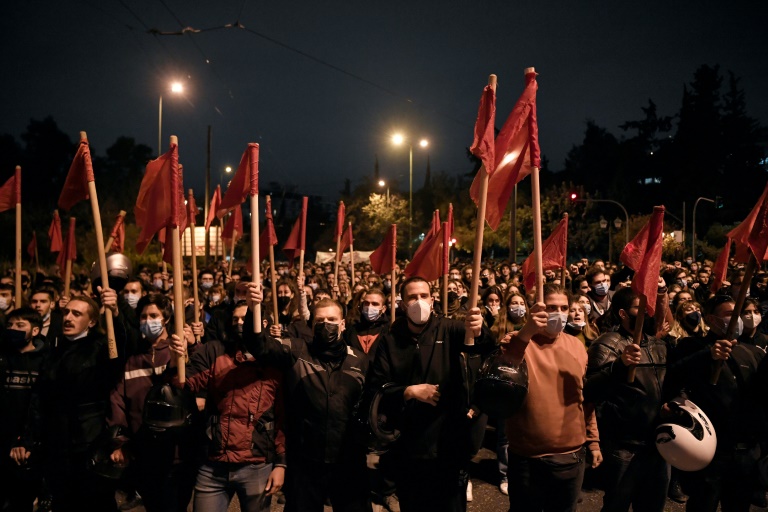 Tens of thousands of people joined protests in Greece’s two largest cities on Wednesday, marking the anniversary of a 1973 student revolt against a US-backed junta, an annual event that often sparks violence.

Twenty thousand turned out in the capital Athens, according to police. Most of the marchers were students, unionists and members of leftist parties. A further 14,000 marched in the second city Thessaloniki.

Police were deployed in their thousands in the capital, supported by drones, a helicopter and water cannon as violence regularly breaks out during the annual protest.

However, both demonstrations remained peaceful into the evening.

In Athens, thousands marched to the US embassy to protest against Washington’s support for the Greek military dictatorship during the Cold War.

“No to police violence and suppression”, read one banner, “Resistance to fascism” another.

Social discontent has been growing in Greece against the conservative government, which has been criticised for its security crackdown, police violence and alleged control of the media.

– Riot police at US embassy –

The American embassy in Athens was ringed with riot police and police vehicles on Wednesday, with embassy staff sent home early, while central Athens subway stations were closed on security grounds.

“US government personnel have been advised to avoid the downtown areas of Athens and Thessaloniki in the late afternoon and to stay behind police lines until the Greek authorities announce the conclusion of the event,” the embassy said ahead of the protests.

Last year, the government tried to ban the protests as the anniversary fell in the middle of a second wave of the coronavirus pandemic, before vaccines became available.

But hundreds defied the ban, and police used tear gas, stun grenades and water cannon to disperse the demonstration in Athens.

Due to a vaccination rate of more than 63 percent in Greece, the government did not ban the demonstrations this year.

The annual protests mark the day in 1973 when at least 24 people were killed at the Athens Polytechnic, when the junta sent troops and police against a pro-democracy student uprising.

The brutal crackdown shocked Europe, and is generally considered to have broken the dictatorship’s grip on power, leading to the restoration of democracy months later.

The bloodstained Greek flag that flew that night over the polytechnic’s iron gate, which was crushed by a tank, was carried at the head of the demonstration in the capital, as it is each year.

A group of students prevented a parliamentary delegation from laying a wreath in the polytechnic on Wednesday morning, chanting “Out with the junta”.

There has been additional tension in recent months as a result of a new law that bans demonstrators from streets partially open to traffic.

Many protesters have been ignoring that restriction, and riot police have regularly used tear gas and water cannon to push them back.