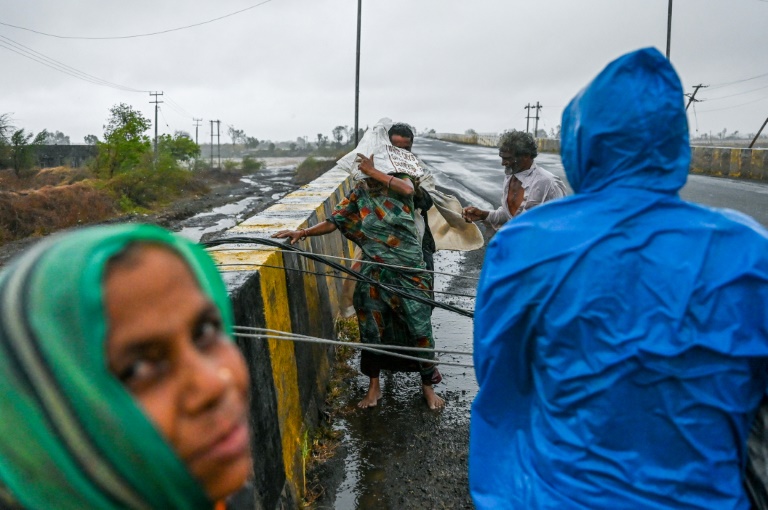 At least 27 people were dead and almost 100 missing on Tuesday after a monster cyclone slammed India, compounding the country’s woes as it recorded a new record number of coronavirus deaths in 24 hours.

The colossal swirling system dubbed Cyclone Tauktae is the latest in what experts say is a growing number of increasingly severe storms in the Arabian Sea as climate change warms its waters.

Hundreds of thousands of people were left without power after the storm hit the Gujarat coast in western India on Monday evening, leaving a trail of death and destruction.

“I have never experienced such intensity in my life,” a hotel owner in the town of Bhavnagar said.

“It was pitch dark as power was cut off and winds were making a roaring sound. It was scary.”

One support vessel serving oil rigs that were walloped by eight-metre waves off Mumbai sank and 96 of the 273 people who had been on board were missing, the Indian Navy said Tuesday.

The defence ministry said 177 people were rescued, with warships attempting to save the rest of the crew in “extremely challenging sea conditions”.

Navy helicopters managed, however, to rescue all 137 people stuck on another barge that also slipped its anchor and ran aground. One other barge and an oil rig were also adrift.

Elsewhere, seven fresh casualties took the toll to 27 including a child crushed by a collapsing wall, an 80-year-old woman killed by a falling pole and a teenage girl by a crumbling roof.

“Since the cyclone made landfall we have not had power or communications,” local official Aayush Oak told AFP by phone from the coastal district of Amreli, where 40-50 mobile phone towers were damaged.

Although the cyclone was one of the fiercest in decades, better forecasting than in previous disasters meant that 200,000 people in danger zones were evacuated from their homes.

“Our planning over the last three days has paid off. We have managed to minimise human casualties,” said Gujarat state chief minister Vijay Rupani.

The cyclone barrelled inland, weakening slightly but still bringing heavy rains and gale-force winds. Forecasters said it would ease into a deep depression during the next six hours.

The deadly weather system hit as India’s healthcare system struggled with a coronavirus surge that in the past 24 hours killed a record 4,329 people.

In Gujarat, all Covid-19 patients in hospitals within five kilometres of the coast were moved.

Authorities there scrambled to ensure there would be no power cuts in hospitals and 41 oxygen plants.

However, one Covid-19 patient died in the town of Mahuva after he could not be moved in time before the storm hit, doctors said.

The state also suspended vaccinations for two days. Mumbai did the same for one day.

“This cyclone is a terrible double blow for millions of people in India whose families have been struck down by record Covid infections and deaths,” said Udaya Regmi from the International Federation of Red Cross and Red Crescent Societies.

Last May, more than 110 people died after “super cyclone” Amphan ravaged eastern India and Bangladesh in the Bay of Bengal.

The Arabian Sea previously experienced fewer severe cyclones than the Bay of Bengal but rising water temperatures because of global warming was changing that, Roxy Mathew Koll from the Indian Institute of Tropical Meteorology told AFP.

“(The) Arabian Sea is one of the fastest-warming basins across the global oceans,” he said.

The effects were felt far and wide with authorities in Nepal — some 2,000 kilometres (1,200 miles) from Gujarat — advising climbers on Everest and other mountains to stay put.

But more than 200 climbers ignored the warnings and were heading up the world’s highest mountain, eyeing the summit by the end of this week, a government official at the base camp said.

In this article:COVID-19, cyclone, India