By this afternoon, CTV News Canada was reporting that 14,000 or more people have been forced to evacuate ahead of the blazes, many with nothing but the clothes on their backs.

Experts are saying that a confluence of factors has created a “perfect storm” for this intense wildfire season, including hot, dry, windy weather; fuel, usually in the form of tinder-dry vegetation; and ignition, usually caused by dry lightning or a tossed cigarette butt, reports CBC News. 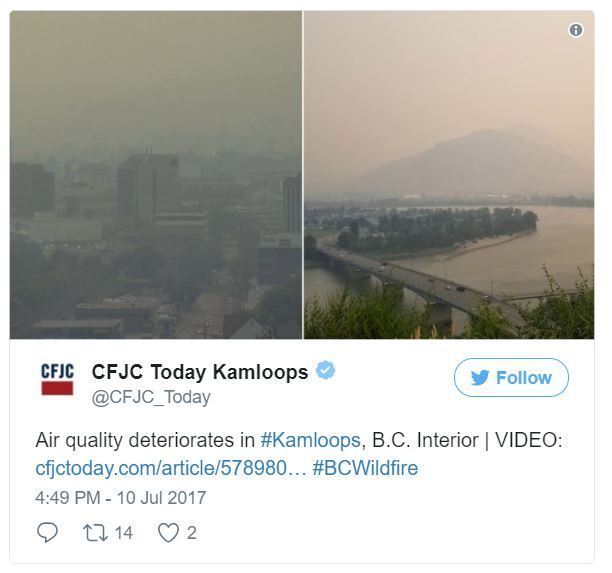 CFJC
Today, British Columbia is getting all kinds of much-needed assistance, not only from the federal government but surrounding provinces, and Washington state in the U.S. as well. About 300 firefighters and support staff from Alberta, Saskatchewan, Ontario and New Brunswick arrived on Monday to help the 1,000 firefighters already on the front lines.

The Canadian Armed Forces have sent aircraft and personnel to support the emergency response, while in Fort McMurray, Alberta, residents who last year fled the horrific wildfire that nearly destroyed their town, sprang into action over the weekend, collecting donations of supplies and driving them to B.C. They have also offered support and advice over social media, which can be very helpful.

Christopher Seguin, vice-president of advancement at Thompson Rivers University told the Canadian press that terrified evacuees have been arriving at the Kamloops reception center with absolutely nothing, “having lost everything and having lost it quickly.” 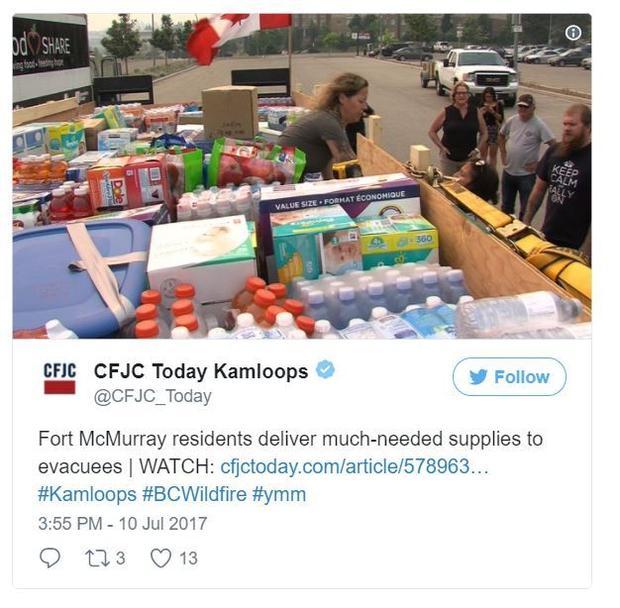 CFJC
He also noted that four tons of supplies have arrived from Fort McMurray, including wrapped and sealed water, Gatorade and baby supplies. Volunteers are making sure the Kamloops center gets the supplies to the folks that need them.

Seguin also expressed his gratitude to the people of Ft. McMurray who had gone the extra mile in their giving. “Thank you. Thank you for giving back and thank you for going to an extraordinary effort to making sure we get exactly what we need at exactly the right time,” he said.

With the total number of fires burning in B.C. up to about 230, 29 of those fires were added on Sunday. About 400 square kilometers (155 square miles) have been scorched. Kevin Skrepnek, the chief information officer for the BC Wildfire Service, said the gusty winds and hot, dry conditions are expected to continue for days.

“Unfortunately, in terms of the weather forecast, we’re not really seeing any reprieve in the immediate future,” he said. Environment Canada says smoke from B.C. wildfires is clouding satellite images of the province.