The large flower’s proper name is Rafflesia tuan-mudae, although most people call it a “corpse flower,” and rightly so – because it smells like rotten meat when it’s in full bloom.

According to AFP.com, the large orange flower’s petals spread a whopping 3.6 feet (111 centimeters) in diameter, beating out the previous record for a corpse flower set a few years ago of 107 centimeters on a bloom also found in the jungles of West Sumatra.

“This is the largest Rafflesia tuan-mudae that has ever been documented,” said Ade Putra at the Agam Conservation Agency in Sumatra. He added that the bloom will only last about a week before it withers and drops off.

The flower is named for British colonialist Sir Stamford Raffles who came across one in the jungles of Indonesia in the early 19th century. The flower can be found in several countries in Southeast Asia, including the Philippians, where one was recently discovered that measured 100 centimeters in diameter. 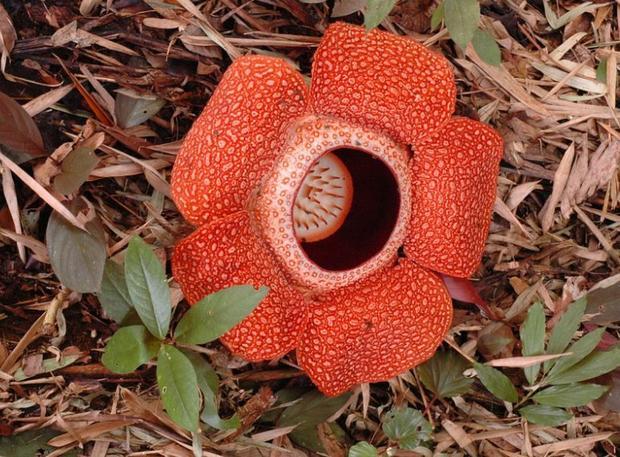 It’s a flower, No – it’s a parasite
According to CTV News Canada, the corpse flower is not a flower at all. It has no roots or leaves – It’s a parasite that makes it’s home on a genus of a tropical grapevine called tetrastigma. Once one of the Rafflesia buds takes root on an unsuspecting grapevine, it will grow for about nine months before unfurling into a gigantic orange-pink flower.

In preparation for reproducing itself, the flower stays in full bloom for about one week, enticing insects with its dead-flesh smell. Properly seduced insects will then carry off the flower’s pollen to take root on other unsuspecting grapevines.

There are 20 known species of Rafflesia and four or five discovered, but unconfirmed. They are also extremely shy and temperamental. Pollination is difficult and rarely occurs because the plants are located so far apart.

But when pollination is successful, the flower produces up to four million seeds, which are spread by the wind, insects, and animals. This also explains why the strange flower is considered an endangered species.

A case of mistaken identity
If you have heard of corpse flowers before, it was thanks to the publicity behind the one that bloomed in the New York Botanical Garden in 2016 or the one that bloomed in the San Francisco Conservatory of Flowers in 2018. Both of these blooms were from a species of parasitic flower known as Amorphophallus titanum. The name literally translates to “giant misshapen phallus.”

This species grows to between 6 and 12 feet (2 to 4 meters) tall and only blooms for about 24 to 36 hours, according to Live Science. This leaves the flower a very brief period to reproduce, however, the smell doesn’t last as long as the smell from Rafflesia.