Researchers at the Scripps Institution of Oceanography at the University of California San Diego were conducting the ARM West Antarctic Radiation Experiment (AWARE) with joint funding from the U.S. Department of Energy (DOE) and National Science Foundation.

The study, “January 2016 extensive summer melt in West Antarctica favoured by strong El Niño,” was published in the online journal, Nature Communications on June 15, and was led by AWARE scientist Julien Nicolas of Ohio State University.

The West Antarctic Ice Sheet (WAIS) is actually a land-bound mass larger in area than Mexico. In January 2016, during Antarctica’s summer, an area twice the size of California partially melted when warm winds from the especially strong El Nino blew over western Antarctica for a period of two weeks.

Satellite imagery showed the extensive snow and ice melt that covered most of the shelf, the world’s largest floating ice shelf, about the size of France. The research team discovered that the melting was caused by warm air bearing moisture and heavy cloud cover. 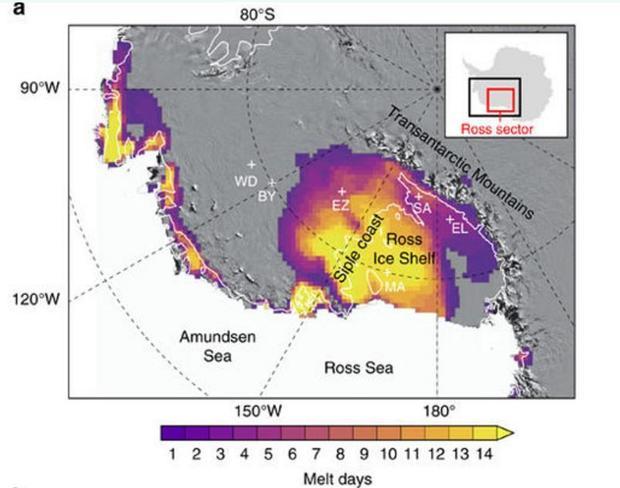 Usually, clouds will often cool the surface of the planet, reflecting solar radiation back into space. But clouds can also trap heat between the clouds and the Earth’s surface, and this is what happened during the melting event, especially when it was fueled by the strong El Nino.

As it turns out, the AWARE team was able to document the melting episode while conducting an extensive cloud and radiation experiment at the WAIS ice divide, downwind of the melt region. The findings are important because El Nino events are expected to become more frequent as long as the planet’s warming trend continues.

If this happens, the Ross Ice Sheet will become even more fragile, with warm ocean waters already melting the ice sheet from below. The bottom line is simple – More frequent melting will accelerate the general deterioration of the WAIS, explained co-author David Bromwich of the Ohio State team.

“We were extraordinarily fortunate to be able to deploy state-of-the-art equipment to West Antarctica just before this large melt event occurred,” said AWARE principal investigator Dan Lubin, a research physicist at Scripps Oceanography, according to Phys.Org.

“These atmospheric measurements will help geophysical scientists develop better physical models for projecting how the Antarctic ice sheet might respond to a changing climate and influence sea level rise,” he said.

“The story of melt all over the ice shelf rattled through the science community as it happened,” added Robin Bell, an Antarctic researcher at the Lamont-Doherty Earth Institute at Columbia University who was not involved in the study, reports Yale Environment360. “Melting is thought to be death to ice shelves. This is the first well-documented melt event where we can see how it happened.”