In July 2013, a six-year-old boy was trapped for nearly three and a half hours under 11 feet of sand on Mt. Baldy before being rescued. At the time, park ranger Bruce Rowe was quoted by CBS News as saying, “This is unprecedented. As they were trying to free him, the hole completely collapsed, burying him so they could no longer see him.”

The 126-foot tall sand dune is what is called a “wandering” dune, meaning it moves or shifts every year, giving rise to it being called a “living dune.” For years, the dune was a popular tourist attraction and drew visitors from as far away as Chicago on weekends in the summer. Just north of the dune is a swimmable beach on Lake Michigan. 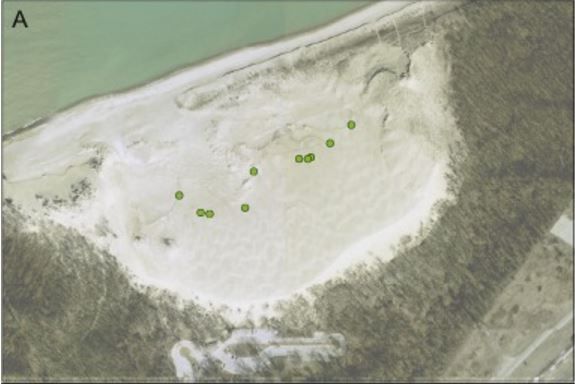 By 2015, Erin Argyilan, Associate Professor of Geosciences at Indiana University Northwest suspected the holes were casts of rotting oak trees, literally a “ghost forest” that the rapidly migrating Mount Baldy entombed in its sandy mass. But the big question was “how did the holes remain open after the trees rotted away.” But there was a clue.

When the young boy was finally found in 2013, rescuers and observers noticed something interesting in the tube the boy was found in. “Its inside wall was sandy and soft but bore the imprint of bark, almost like a fossil. It was as if the boy had wound up at the bottom of a hollowed-out tree trunk, except not a bit of tree was there,” Ariel Sabar reported in 2015 for Smithsonian magazine. 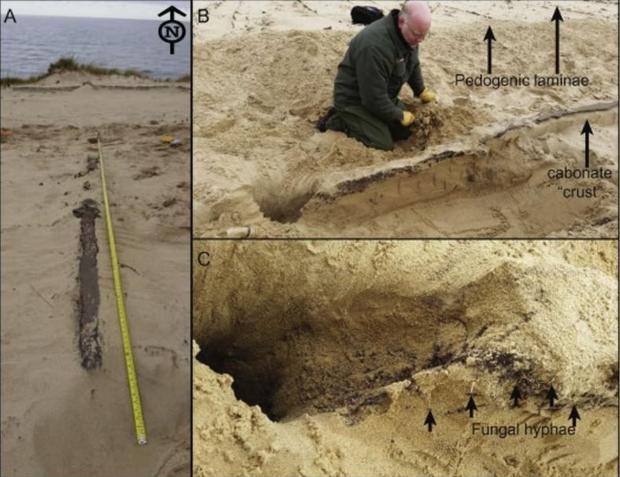 (A) A tree limb exposed on the stoss slope after a major storm extends into a vertical hole that measured 2.4 m in depth and 26 × 16 cm in diameter. A carbonate precipitate is visible on the subaerial surface of the limb and as horizontal “laminae” on the stoss slope. (B) The tree limb connects to the trunk which dips to the north at an angle of 66° with the dune’s stoss slope. Fungal hyphae were visible in the decomposing wood upon excavation (arrows).
Indiana University Northwest

Well, to make a long story short, after using all manner of technologies, from ground-penetrating radar to paint brushes and trowels, scientists did discover evidence of decaying trees, but even armed with this new knowledge, they still didn’t know why the holes stay open within the dune.

Scientists then collected sand from the holes and using powerful microscopes, discovered the fungus that likely consumed the woody mass of the trees had extended “roots” or hyphae into the sandy walls. The hyphae, along with minerals in the sand that acted the same as “cementing” agents, had kept the hollow spaces in place. 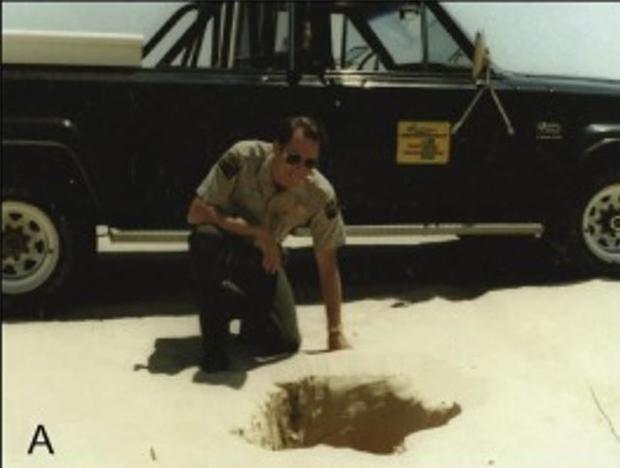 Photograph of a hole found at Silver Lake State Park, Mears Michigan in 1985 with a pine limb visible in photo.
Indiana University Northwest

The resulting study, published in Aeolian Research in 2015, made the discovery official and the phenomenon got an official name: dune decomposition chimneys. Now, all that’s left to do is find out how the “cement” works and where it comes from.

Today, Argyilan is working on finding out what causes the “cement” to form. “It’s not in the sand. Is it the tree itself? Is it the fungus? The sediment? What is the key factor that is making this happen? The work we are doing now will show … how the materials got there,” she told Indiana University Northwest News last week.

And what about Mt. Baldy? It will remain closed to the public while another study is being done by the Indiana Geological Survey. This study started two years ago and involves making a 3D map of the internal architecture of the dune. The ground-penetrating radar included 100 Mhz and 250 Mhz rigs used to image the internal structure of the dune, sort of like a CT scan is used to map the inside of a human body.

We are sure to find out more about Mt. Baldy over the next couple years and that knowledge will go far in allowing us to understand and unlock the geological mysteries that still remain unanswered about our world.