Microbial fuel cells use bacteria to generate electricity from waste fluids by tapping into the biochemical energy used for microbe growth, converting it directly into electricity.

The great thing about this technology is that any waste fluids can be used, creating energy without the use of fossil fuels. This makes MFCs a valuable sustainable and green technology.

The laboratory-based study was led by Professor Ioannis Ieropoulos, of the Bristol BioEnergy Center at the University of the West of England (UWE Bristol). In the experiment, a pair of socks was embedded with miniaturized MFCs and fueled with the subjects urine, and pumped by the act of the subject walking. This action created energy that powered a wireless generator that sent a signal to a personal computer.

Continuous-flow MFCs are normally powered by mains powered pumps to circulate the urine over the microbial fuel cells, but this experiment solely relied on human activity, in this case, the act of walking normally. The manual pump was based on a simple fish circulatory system, and the action of walking caused the urine to be pumped over the MFCs, generating energy.

Soft tubes positioned under the heels of the socks ensured a constant pumping action took place as the subject walked. This wearable MFC system was able to successfully run a wireless transmitter that sent a message to a PC every two minutes.

ScienceNewsline reports Professor Ieropoulos said, “Having already powered a mobile phone with MFCs using urine as fuel, we wanted to see if we could replicate this success in wearable technology. We also wanted the system to be entirely self-sufficient, running only on human power – using urine as fuel and the action of the foot as the pump.”

The wearable technology can be adapted to transmit a person’s coordinates in an emergency situation, and will also allow responders to know right away if the person is alive because it takes human fuel and activity to make this technology work.

A prototype urinal is in development at the Center, in partnership with Oxfam that uses pee-power technology to light cubicles in refugee camps.

This fascinating study was published in the journal Bioinspiration and Biomimetics on December 10, 2015, under the title: “Self sufficient wireless transmitter powered by foot-pumped urine operating wearable MFC.” 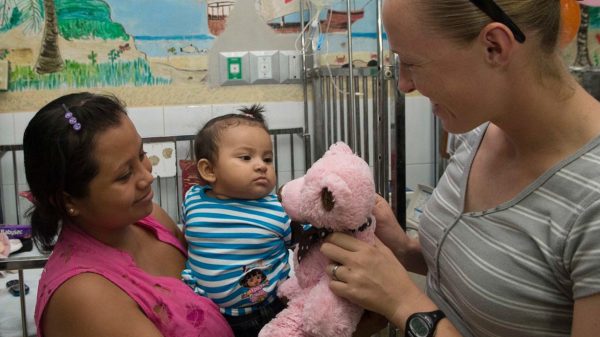 The White House is resisting calls to declare a national emergency over the surge in respiratory illnesses in children.