Everyone has heard the phrase, “Water, water, everywhere, Nor any drop to drink.” The line is from the poem, “The Rime of the Ancient Mariner,” by Samuel Taylor Coleridge and tells the tale of a sailor on a ship in calm water lamenting his fate because all the water available is saltwater.

In many regions of the world today, the available water is contaminated with chemicals or polluted with raw sewage. In other regions, climate change and over population has made water resources scarce to non-existent. However, there is now hope because of new solar-powered harvester technology.

The new technology was developed by scientists at the Massachusetts Institute of Technology and the University of California, Berkeley using a special material called a metal-organic framework, or MOF that was developed at UC-Berkeley. 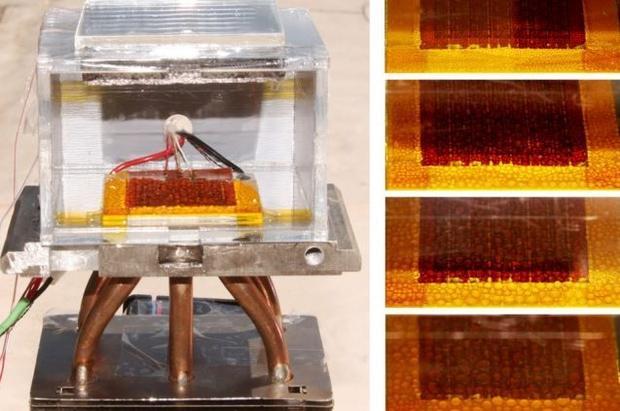 This proof-of-concept device, built at MIT, demonstrates a new system for extracting drinking water from the air. The sequence of images at right shows how droplets of water accumulate over time as the inside temperature increases while exposed to the sun.
MIT

“This is a major breakthrough in the long-standing challenge of harvesting water from the air at low humidity,” said Omar Yaghi, one of two senior authors of the paper, who holds the James and Neeltje Tretter chair in chemistry at UC Berkeley and is a faculty scientist at Lawrence Berkeley National Laboratory.

The solar-powered device can extract about three liters (3.2 quarts) of water from the air in 12 hours, and can do this even when the humidity is as low as 20 to 30 percent. “We wanted to demonstrate that if you are cut off somewhere in the desert, you could survive because of this device., said Dr. Yaghi.

He went on to explain that a person needs about 330 milliliters ( about one U.S. cup) of water per day. “That is something one could collect in less than an hour with this system. There is no other way to do that right now, except by using extra energy. Your electric dehumidifier at home ‘produces’ very expensive water.”

It’s all about the MOF
Metal organic frameworks, MOFs, are materials in which metal-to-organic ligand interactions go on to create porous coordination networks with record-setting surface areas that even surpass activated carbons and zeolites. 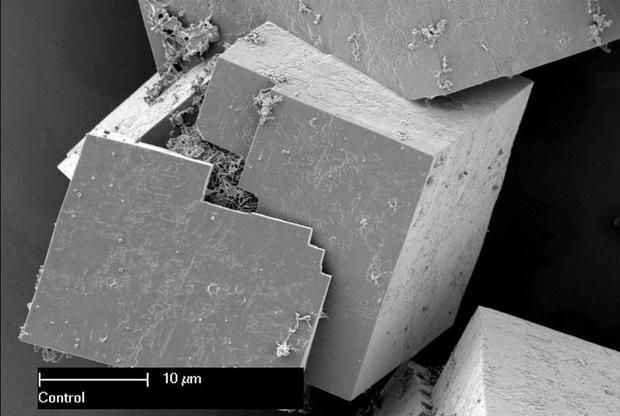 MOFs consist of well-ordered ultra-porous crystals which form multi-dimensional structures with enormous surface areas. One gram of the material can have the surface area of more than three football fields. This is a scanning electron microscope view of the inside of an MOF.
CSIRO

MOFs have been investigated in nuclear waste recycling and reduction, in targeting specific cancer cells to name just a couple of the many applications.

Yaghi invented metal-organic frameworks more than 20 years ago, and today, there are over 20,000 different MOFs that have been created by researchers worldwide. So it was just a matter of time before an MOF specifically geared toward harvesting water would be created.

In the solar-powered harvester, over two pounds of dust-sized MOF crystals compressed between a solar absorber and a condenser plate, are placed inside a chamber that is open to the air. As the ambient air diffuses through the MOF, water molecules attach themselves to the porous material’s interior surfaces. 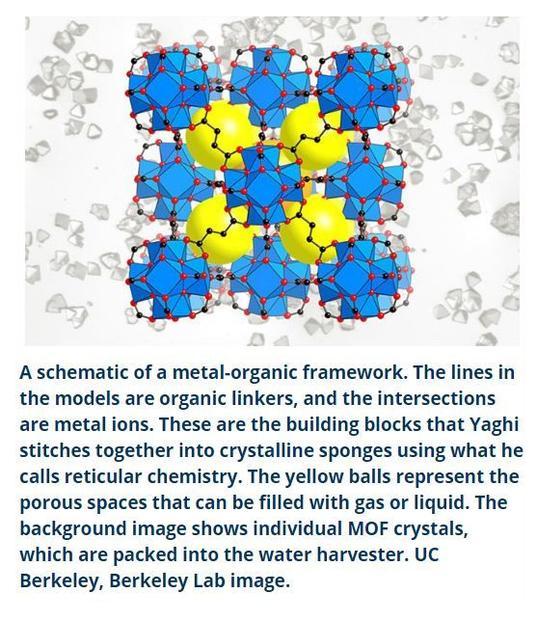 Sunlight heats up the MOF, driving the water molecules toward the condenser which is the same temperature as the outside air. The water vapor condenses into liquid water that drips into a collection vessel. Right now, the MOF in the “proof of concept” harvester can only collect about 20 percent of its weight in water.

“It’s not just that we made a passive device that sits there collecting water; we have now laid both the experimental and theoretical foundations so that we can screen other MOFs, thousands of which could be made, to find even better materials,” Yaghi said.

The solar-powered harvester is described in a paper in the online journal Science, entitled “Water harvesting from air with metal-organic frameworks powered by natural sunlight.”