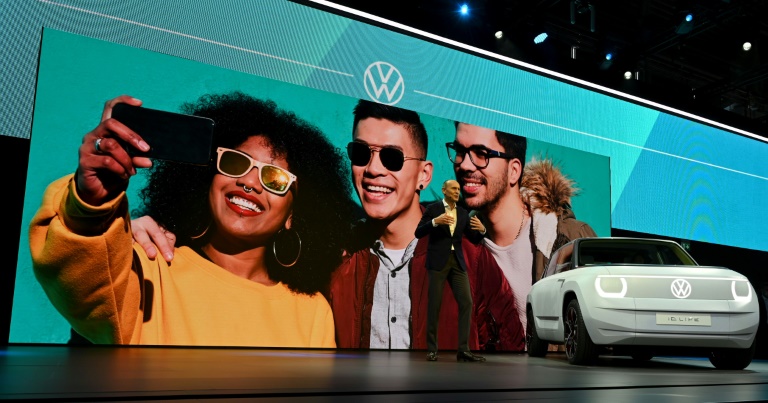 Volkswagen chief executive Herbert Diess said Monday it was “impossible” for the German car giant’s electric transformation to happen any faster, but he accused Angela Merkel’s government of holding back change with generous diesel subsidies.

In an interview with AFP and the Financial Times at the IAA motor show in Munich, Diess said the VW group “was really fast in changing” as its sets its sights on becoming a global leader in environmentally-friendly, battery-powered vehicles.

“Can we do it faster? No, it’s impossible,” said Diess.

“Because this transition is so complicated, requires so much investment” and capacity building, he said, from battery cell production to new factories.

Germany’s biennial IAA exhibition comes as the industry is in the midst of a painful rebirth, spurred by climate concerns and tougher pollution rules.

Several carmakers have already set dates for phasing out the internal combustion engine, even if critics say their self-imposed deadlines are vague and non-binding.

Nevertheless, the clock is ticking with the European Union recently proposing to end the sale of new diesel and petrol cars by 2035.

The 12-brand VW group — which includes Audi, Porsche and Skoda — is pouring billions into the transition and aims to become the world’s largest electric carmaker by 2025.

“Can someone be faster than us? I would question that,” the 62-year-old Austrian said, adding that even electric car pioneer Tesla took over a decade to get going.

Diess said Germany’s electric shift had “definitely” been slowed by the low taxation of diesel in Europe’s top economy.

But diesel’s clean image was shattered in 2015 when Volkswagen was forced to admit it had installed cheating software in millions of diesel vehicles to dupe pollution tests.

The “dieselgate” scandal saw the popularity of such cars plummet and hastened the electric revolution, but diesel prices have remained relatively low.

To drive forward the electric push, “you need the right environment”, said Diess, one that is not fostered when diesel is kept artificially cheap, including under the successive governments of outgoing chancellor Merkel.

Merkel, who is bowing out at Germany’s September 26 general election after 16 years in power, is scheduled to speak at the IAA on Tuesday.

Looking back at her tenure, Diess praised Merkel for “the stability she brought” and her support in keeping the German auto industry competitive with China and the United States.

But Merkel could have been “a bit more decisive” in some areas, the CEO said, such as incentives for electric vehicles.

A pre-IAA announcement by German climate campaigners threatening legal action against Volkswagen and other carmakers to push them to phase out the internal combustion engine by 2030 felt “a little bit unjust”, Diess said.

While he understood the logic of going after those benefitting “from burning oil or coal or gas”, Diess said activists should first look at big oil-producing nations like Saudi Arabia.

With Germany in the final weeks of campaigning ahead of a vote that will end the Merkel era, Diess said he was pleased that “most of the parties now are taking climate change very seriously”.

Surveys suggest the race is wide open but Diess said VW “can live with every possible outcome”.

He however criticised chancellor candidate Armin Laschet, the leader of Merkel’s centre-right CDU party, who recently asked Tesla CEO Elon Musk if hydrogen cars could be the future — much to the latter’s bemusement.

“Electrification is the way forward. There’s no other alternative. No competitor is serious about any alternatives anymore,” Diess said.

Turning to the global semiconductor shortages currently plaguing the auto industry, forcing VW and its rivals to trim production at some plants, Diess said he hoped to see “an alleviation” of the chip crunch by the end of September.

In this article:electric vehicles, Volkswagen