[08:46] was created by a group of French students who intend to accurately recreate the events of the fateful day by emphasizing the point of view of the helpless victims. Described as “a narrative driven VR experience,” the development team of six created the project with two actors in just three months. They conducted hours of research to establish what conditions would have been like for the thousands of office workers inside the north tower of the World Trade Center as the events of 9/11 took place.
At 8:46 a.m. on September 11, al-Qaeda terrorists crashed American Airlines Flight 11 into the North Tower of the World Trade Center, starting a day of plane hijackings that ultimately killed thousands and started President George Bush’s “war on terror.” [08:46]’s simulation of the day can be downloaded now for use with the Oculus Rift virtual reality headset, but it has created an unprecedented amount of controversy among the VR community.
Creative Bloq reports that the attitude online has ranged from people accepting [08:46] as an educational tool to questioning whether it deserves a place in the gaming market. To date, virtual reality experiences have tended to be concentrated at the leisure market, extending existing games including family-friendly titles like Minecraft. [08:46] firmly pushes the boundaries of the technology, forcing people to consider when something stops being a game and crosses the border into a very different category. 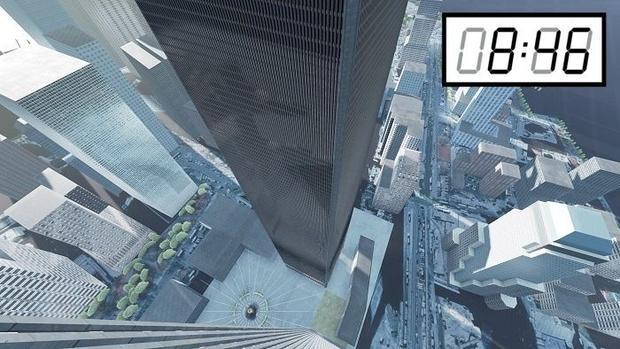 The Next Web’s Lauren Hockenson experienced [08:46] and titled her subsequent write-up “Let’s not have a VR game about 9/11, okay?” Hockenson describes the game as “hard to comprehend” and “illogical in its controversy,” writing “creating that experience for VR is triggering in a way that can’t be qualified until you put that headset on.”
[08:46] is the first real controversy to hit virtual reality to date but such scenarios are likely to become more common in the future. As VR headsets become more accessible, consumer-friendly and widespread, more developers will begin to create new experiences for them that simply haven’t been possible using the technologies of the past. Inevitably, some of these “experiences” may be uncomfortable, especially when they concern already-sensitive historical events.
Hockenson warned other developers: “VR is personal. It triggers visceral reactions in a way that traditional gaming does not. Developers need to use this wisely, or risk hurting those they seek to entertain.”
Oculus hasn’t commented on its views on [08:46]. The company’s policies don’t define an acceptability threshold for the platform, although more definition of the categories that can be published may be required in the future. Currently, anyone who owns an Oculus Rift DK2 headset can download what is marketed as an immersive simulation of 9/11 from the [08:46] website.