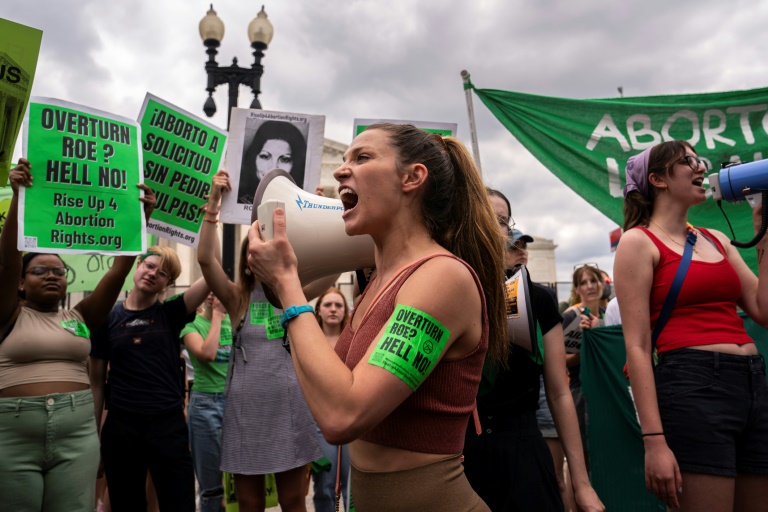 Fearing a data dragnet weaponized against women seeking abortions and those helping them, privacy groups are warning that pregnancy-related information online might present a serious legal risk and demanding tech companies take action in the wake of America’s revokation of abortion rights.

As states move to ban or restrict the procedure after the Supreme Court’s landmark reversal, worries grew that social media posts or information on apps could be used by authorities to build cases.

For example, geolocation data or an internet search history might serve to incriminate women or those who help them in states that opt to ban abortion.

“Tech companies must step up and play a crucial role in protecting women’s digital privacy,” she added.

Google, Facebook parent Meta and others track their users in order to sell ultra-targeted and personalized advertising space.

Though that information is anonymized, it remains accessible to authorities with a warrant.

The Supreme Court ruling on Friday gives all 50 states the freedom to ban the procedure, and at least eight have already done so.

Some laws, like one passed in Texas in September, encourage private citizens to launch lawsuits against women suspected of having abortions.

The people who help the women can also be targeted, including for example an Uber driver who took them to the clinic.

More than 40 US Democratic lawmakers in May warned Google of risks posed by its data practices and urged changes.

“Google’s current practice of collecting and retaining extensive records of cell phone location data will allow it to become a tool for far-right extremists looking to crack down on people seeking reproductive health care,” read a letter to Google chief executive Sundar Pichai.

Nonprofit digital rights group Fight For The Future echoed the legislators’ plea in an online petition demanding that Google get rid of location data that could be “weaponized against abortion patients and doctors.”

Google did not respond to a request for comment on Friday. Apple and Meta did not reply to requests for comment, either.

Text message logs, email messages, and data from apps such as those used to track menstrual cycles can hold significant pregnancy-related data.

The company behind an app called Natural Cycles which lets women track fertility told AFP that it is working on letting users remain completely anonymous in light of the Supreme Court ruling.

“The goal is to make it so no one — not even us at Natural Cycles -– can identify the user,” said spokesperson Laura Hanafin.

People should tighten privacy settings on devices or platforms, turn off location-sensing features, and use messaging services that scramble exchanges with encryption to prevent snooping, the Electronic Frontier Foundation (EFF) advised.

“There are indeed things users can do to protect themselves, such as using private browser windows, reputable VPNs, and encrypted messaging,” EFF Legal Director Corynne McSherry told AFP.

“But the burden should not rest entirely with the user.”

“The difference between now and the last time that abortion was illegal in the United States is that we live in an era of unprecedented digital surveillance,” EFF director of cybersecurity Eva Galperin said in a tweet.

“If tech companies don’t want to have their data turned into a dragnet… they need to stop collecting that data now,” she added.

Congresswoman Sara Jacobs, a Democrat from California, has put forward legislation that would require companies to collect only the health information strictly necessary to provide their service.

“We shouldn’t leave it to individual people to have to figure out how to delete things, what apps they can be on and can’t be on,” she told AFP.

“It’s up to us as a government to do our job and protect sensitive health data,” she added.

In this article:Abortion, Data, Internet, Privacy rights, Rights, US