The tiny bare-board computer undercuts even the $20 cost of the original Raspberry Pi Model B. Despite this, its 1GHz Broadcom processor is 40 percent faster than the first-generation Pi. The Pi Zero has 512MB of RAM, a micro-SD card slot, a mini-HDMI port for connecting to monitors and micro-USB sockets for data and power. The computer measures up at 65mm x 30mm x 5mm.
Users will be responsible for providing their own mouse, keyboard, power supply and required adapters but the Raspberry Pi store sells these in bundles if required. In a striking example of how cheap raw computing power is becoming, these ubiquitous accessories are likely to cost considerably more than the Pi Zero itself.
The size hasn’t led to any decrease in expansion capabilities. The Pi Zero has the same 40-pin GPIO output as all its larger siblings, letting users easily connect hardware components like LEDs and motors and control them using software.
As with other Raspberry Pi computers, the Zero runs a customised version of Linux, Raspbian, and boots off an SD card. Preinstalled tools introduce programming to every user, irrespective of age or ability. New Pi owners can start off with the drag-and-drop friendliness of Scratch before gradually progressing to writing real-world code in languages such as Python.
Raspberry Pi founder Eben Upton said in a blog post: “Of all the things we do at Raspberry Pi, driving down the cost of computer hardware remains one of the most important. Even in the developed world, a programmable computer is a luxury item for a lot of people, and every extra dollar that we ask someone to spend decreases the chance that they’ll choose to get involved.”
It added that the $20-35 Raspberry Pi Model B and successor editions have introduced “millions” of people to coding since their 2012 introduction. The Zero is designed to lower the entry cost barrier even further, giving even more people access to the tools they need when learning to code. 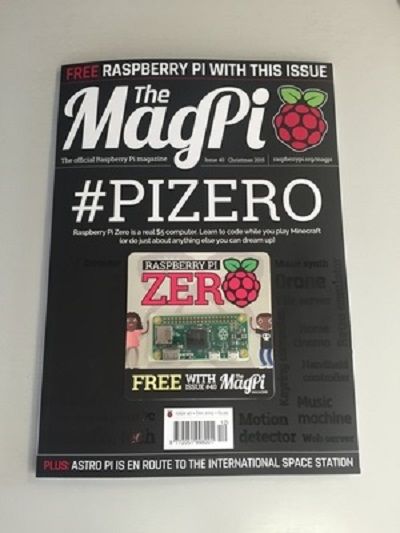 The Raspberry Pi Zero goes on sale from today but many retailers have already run out of stock. The creators have warned demand is expected to outstrip supply “for the next little while” and say they are building units as quickly as possible to supplement the “tens of thousands” that are ready to ship today.
UK residents have an alternative method of getting their hands on the Pi Zero. In a world first, the Raspberry Pi Foundation is giving away a free computer on the front cover of every copy of MagPi magazine Issue 40, available in UK newsagents from today. As with the computer itself, supply is limited and the issue is expected to quickly fly off shelves.
The Pi Zero brings computing down to a level that has the potential to get millions of people coding. On the front of magazines today is a palm-sized machine that costs less than a cup of coffee and sits comfortably within the confines of a child’s pocket money. This is a computer for the people in every sense, provided the supply issues can be ironed out in the next few weeks.