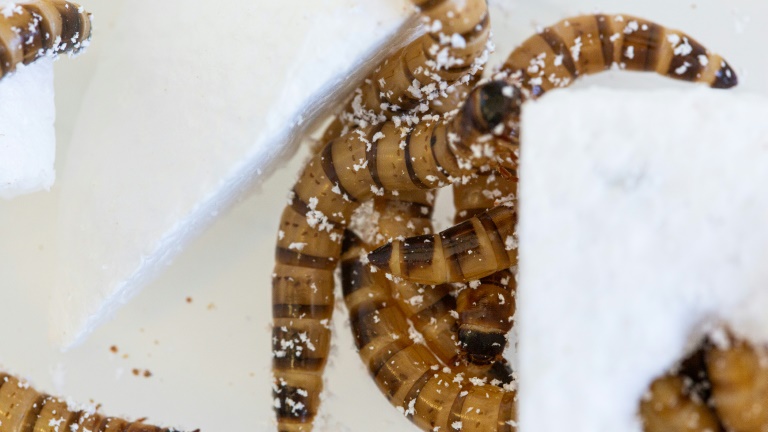 Packing material, disposable cutlery, CD cases: Polystyrene is among the most common forms of plastic, but recycling it isn’t easy and the vast majority ends up in landfills or finds its way to the oceans where it threatens marine life.

Scientists at Australia’s University of Queensland have now discovered that superworms — the larvae of Zophobas morio darkling beetles — are eager to dine on the substance, and their gut enzymes could hold the key to higher recycling rates.

Chris Rinke, who led a study that was published in the journal Microbial Genomics on Thursday, told AFP previous reports had shown that tiny waxworms and mealworms (which are also beetle larvae) had a good track record when it came to eating plastic, “so we hypothesized that the much larger superworms can eat even more.”

Superworms grow up to two inches (five centimeters) and are bred as a food source for reptiles and birds, or even for humans in countries such as Thailand and Mexico.

Rinke and his team fed superworms different diets over a three week period, with some given polystyrene foam, commonly known as styrofoam, some bran, and others not fed at all.

“We confirmed that superworms can survive on a sole polystyrene diet, and even gain a small amount of weight — compared to a starvation control group — which suggests that the worms can gain energy from eating polystyrene,” he said.

Although the polystyrene-reared superworms completed their life cycle, becoming pupae and then fully developed adult beetles, tests revealed a loss of microbial diversity in their guts and potential pathogens.

These findings suggested that while the bugs can survive on polystyrene, it is not a nutritious diet and impacts their health.

Next, the team used a technique called metagenomics to analyze the microbial gut community and find which gene-encoded enzymes were involved in degrading the plastic.

One way to put the findings to use would be to provide superworms with food waste or agricultural bioproducts to consume alongside polystyrene.

“This could be a way to improve the health of the worms and to deal with the large amount of food waste in Western countries,” said Rinke.

But while breeding more worms for this purpose is possible, he envisages another route: creating recycling plants that mimic what the larvae do, which is to first shred the plastic in their mouths then digest it through bacterial enzymes.

“Ultimately, we want to take the superworms out of the equation,” he said, and he now plans more research aimed at finding the most efficient enzymes, then enhancing them further through enzyme engineering.

The breakdown products from that reaction could then be fed to other microbes to create high-value compounds, such as bioplastics, in what he hopes would become an economically viable “upcycling” approach.