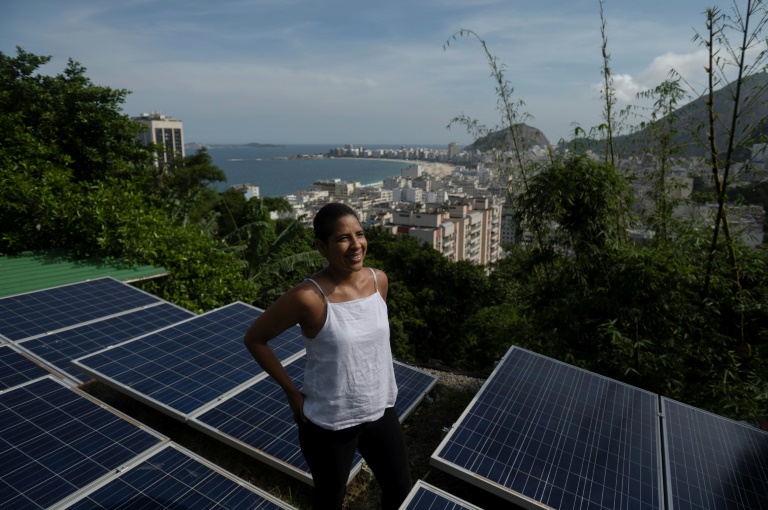 In a hillside slum with breathtaking views of Rio de Janeiro’s famed Copacabana beach, a rooftop covered in photovoltaic panels glitters in the tropical sun — one of many in Brazil’s first favela solar energy project.

The solar panels on the roof of a community organization in the Babilonia favela take one thing the impoverished neighborhood has in abundance — sunshine — and use it to lower electricity bills while expanding renewable power sources.

The 60 panels feed electricity directly to the grid. In return, the utility company gives 34 families participating in the cooperative a much-needed discount on their bills.

Another 44 panels are installed atop private businesses, including a local hostel, which also receive discounts as part of the co-op.

“People in the favelas all too often have to decide between paying their electricity bills and buying food,” says the head of the co-op, Stefano Motta.

“More and more residents are coming to us with complaints about their light bills — sometimes 600 reais ($125) a month or more.

We’re using that to raise awareness about the importance of solar energy for the economy and the environment,” says the 45-year-old Italian, who moved to Rio a decade ago and now lives in Chapeu Mangueira — the favela next to Babilonia, which also takes part in the co-op.

The project was launched last June by community leaders and a non-profit organization called Revolusolar.

It comes at a critical moment for favela residents struggling to pay their bills. The average electricity price for residential customers in Brazil is expected to increase by 21 percent this year, after rising seven percent last year, according to the National Electric Energy Agency (ANEEL).

Marcia Campos, a 51-year-old social worker who lives in Babilonia, says that before joining the solar co-op she was struggling to pay her electricity bill, which had risen to nearly 500 reais a month — around half the Brazilian monthly minimum wage.

Last year, two key hydroelectricity producing regions in Brazil were hit by their worst drought in nearly a century, shrinking the rivers that feed dams producing nearly 60 percent of the country’s electricity supply.

That sent authorities scrambling to fire up costlier thermal power plants to compensate.

But clean-energy proponents say renewable power sources are a better option for the economy and the environment.

In the favelas, solar is also an alternative to dangerous, clandestine electricity connections known as “gatos,” which residents use to illegally wire their homes into the grid.

Electric utilities estimate the common practice costs 1.5 billion reais a year, and contributes to higher prices for everyone else.

Brazil currently gets just 1.8 percent of its energy consumption from solar.

But residential solar-energy production from projects like the one in Babilonia “is growing very fast,” says Carlos Aparecido, a professor of electrical engineering at Rio de Janeiro State University.

Solar power generated an average of 878 megawatts in Brazil in 2021, up 29.3 percent from 2020, according to the electricity grid operator, the National Interconnected System (SIN).

In Vidigal, another iconic favela with breathtaking views of Rio’s coastline, a community organization called Ser Alzira launched a solar panel project in December, using a co-op model similar to the one in Babilonia.

“We really needed it,” says Elma de Aleluia, the organization’s founder, who purchased the panels with the help of donations from the private sector.

“Thanks to the savings on the electricity bill, I have money to spend on our other projects.”

In this article:Brazil, Energy, Environment, Poverty