According to a recent Nomura research report, the main two takeaways from the paper, from Peking University’s China Center for Health Development, were that the prevalence of visual problems in China is far above the global average and that the problem is quickly getting worse.

In 2012, about 500 million people in China had an uncorrected visual defect. Of those, 450 million had myopia, or nearsightedness. That’s about a third of the country’s population. And the report forecasts that barring policy interventions, about 700 million people, or roughly half of the population, will have myopia by 2020. 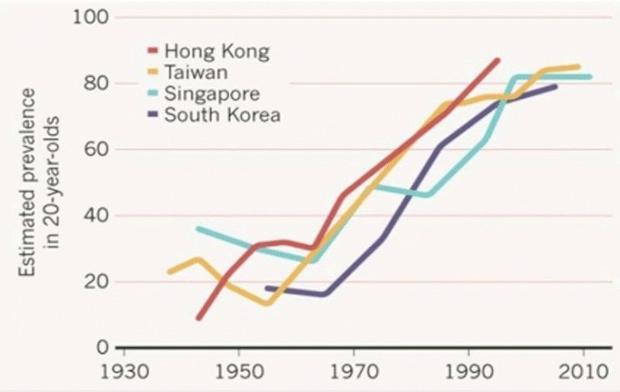 In Taiwan, the situation is even worse. More than half the country’s population, about 11.5 million people, are nearsighted.

Nearsightedness is especially prevalent among teenagers. Forty-seven percent of China’s population ages 6 to 15, and 55 percent of those ages 16 to 25, are suffering from myopia.

According to the Nomura report, an academic study from the Australian National University estimated that the prevalence of myopia in 20-year-olds had reached 80% in developed Asia, including Hong Kong, Taiwan, Singapore, and South Korea. In the US and Europe the rate is closer to 50 percent, which is still twice what it was 50 years ago. 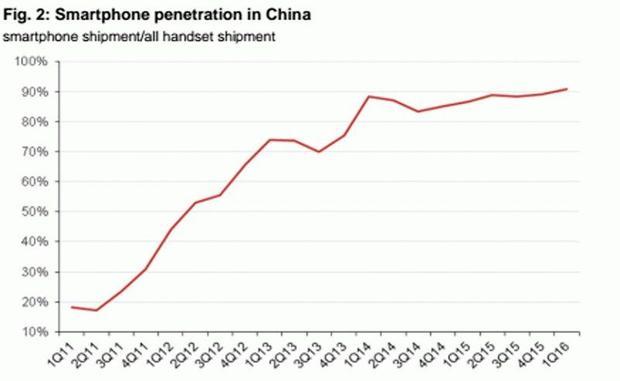 Nomura suggests that some factors contributing to this crisis are the urbanization, sedentary lifestyle, and prevalence of smartphones that have taken over China in recent years. The white paper cited the “intensity of near-range work and the decreasing intensity of outdoor activities, due to aggravating academic pressures and extensive use of electronic devices” as the main causes.

Smartphone penetration has been increasing in recent years, and when you combine the increased screen time with decreasing time spent outside, the eye strain and damage has serious consequences.

China’s eyesight problem is also having economic effects. The Peking University report estimated that the total economic burden caused by visual defects was 682 billion to 691 billion yuan — 1.3 percent of the country’s gross domestic product — in large part because of reduced labor participation. 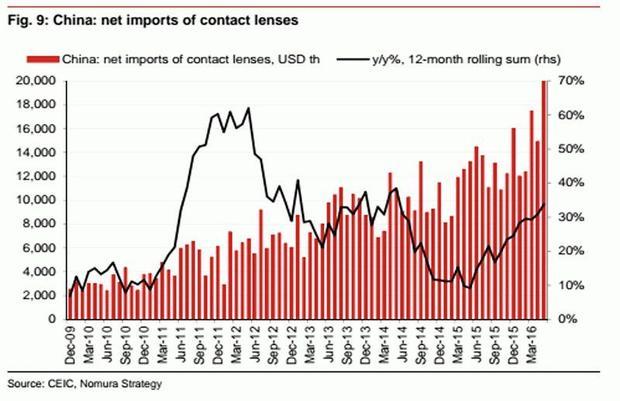 The market for glasses and contact lenses has been booming. According to the Nomura report, Euromonitor estimates that global sales of eyewear will reach $121 billion this year and $136 billion by 2021.

The US is the largest market, accounting for 43% of total sales value. Mainland China’s market for contacts is a little less than 10 percent of that, but it has been growing at a pace that is outpacing global growth, with contact lens import growth growing 34 percent over the past year.

In this article:China, Eyesight, Health, Smartphones