If there’s any new technology poised to take the throne of the Web-TV kingdom, it’s the yet-to-be-released Joost. But it still has too many kinks to win us over completely. Find out the highs and lows of Joost in Digital Journal’s review of the much-hyped service.

Digital Journal — When I first received the Joost beta, I thought: “Wow. Free TV through the Web. Will I never leave the house now?” After all, Joost comes from the inventive minds of Niklas Zennstrom and Janus Friis, who founded Kazaa and Skype. And their new toy uses the power of peer-to-peer file-sharing to let people watch streamed TV from around the world, completely free. Forget the remote. Now, everyone will be saying, “Pass the mouse.”

Downloading the latest Joost beta 0.9.2 is painless, on both the clock and the hard drive. It barely takes up 30MB, and the app isn’t bundled with a lot of add-ons that clogs memory. By using a password and user name, I entered the vast e-TV universe that is making Joost an alias for “media saviour.” 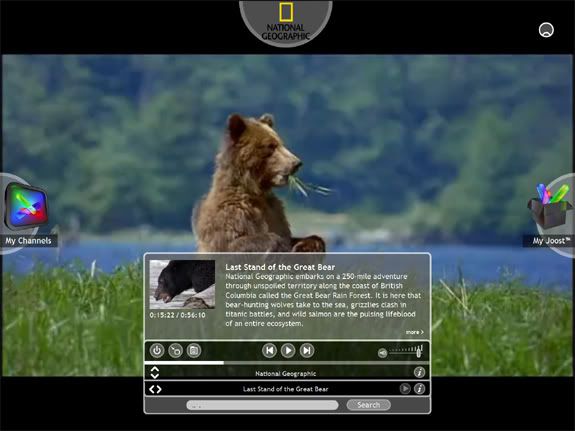 Every channel and show on Joost comes with a description, so you can get a quick snapshot just by pressing the information button.

Controls & Picture
I love how easy it is to use Joost. Hovering the mouse over the screen brings up a menu overlay with several options: change channel, change program, pause, fast forward, rewind, call up other options, or switch off Joost. An accessible button lets me expand the window to full screen. And off to the left is a TV icon beside the words MyChannels, which lets me see an index of stations and programs. The “i” button (representing the word “information”, I assume) is a nifty tool: Click on it to suddenly see details on a certain channel or show, complete with summary, actors and awards won. This was extremely helpful in letting me skip the shows that sounded boring or lame.

We’ll get to the lame programming soon. First, let me praise the almighty creators of Joost for giving me incredible picture quality that no streaming site has yet to match. There were barely any blurry edges, and shows only stuttered once in awhile. (I’d advise running Joost with speedy processors and a screen at 13-inches or more.) Seeing images of sharks swimming in the Galapagos Islands, for example, was incredibly TV-like. Joost shows were clear, smooth and static-free.

For you ad haters out there, Joost boasts another big pro: almost no commercials. In fact, in the shows I watched so far, I noticed only a three-second Wrigley’s ad fronting each show. I was overjoyed to watch what I wanted without any interruptions, but it felt too good to be true. My pessimism is only partially on the money: Once Joost is released to the public — projected some time in 2007 — the service will allow one-minute ads for every one hour of programming. I can hear the couch potatoes salivating already. 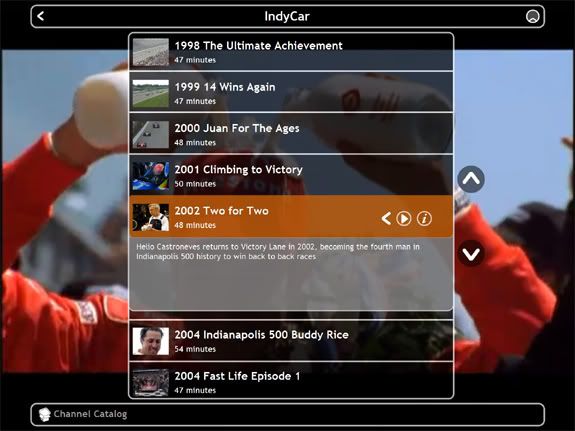 No more random flipping between channels. Joost includes an easy-to-use graphical programme list with previews of every show in a channel, letting you browse quickly and easily through the TV shows that really interest you.

Sure, no ads will appeal to millions of people, but let’s look at the meat of Joost: programming. To be fair, Joost’s deals with Viacom, CBS and other major networks haven’t materialized in the beta version, so early testers miss out on mainstream shows. What Joost has so far can best be summed up as mediocre. Here’s a quick rundown of several channels from 20 released at press time:

Programming
LX.TV promotes itself as a lifestyle channel (not the dreaded “L” word!), which means lots of soft sells like the reality show 30 Year Old Virgin. It’s exactly as it sounds, so if that’s your cup of tea, fine, but it didn’t turn my crank. I’d watch Identity if I wanted to feel dumb.

Similar to LX, the channel Lime is chock full of shows dealing with health foods, “personal growth,” and complementary medicine. There are 22-minute shows such as Simply Green for those jonesing for info on how to renovate their kitchen in an eco-friendly way. Useful info, but not the most entertaining choices.

Extreme sports also get some play on Joost, particularly with the channel Havoc Action. Targeting adrenaline junkies, this channel hosts shows such as Skate and Surf: Hawaii Barrels. It looks like Joost is trying to serve niche programming that you can’t find with traditional broadcasters, an idea that can either rocket Joost to success or mire it in obscurity.

On a more mainstream note, channels such as Guinness World Records TV and IndieFlix appeal to users who want solid programming without the laugh tracks. Guinness focuses on feat of strength or outright weirdness, which somehow finds a market on prime-time TV today. And IndieFlix offers intriguing and rare films such as Birthright, which is so indie it doesn’t even have an IMDB page. Can’t go wrong with a well-acted film about a post-industrial world a la 1984. I wouldn’t have seen this type of film anywhere else, let alone the “obscure” section of my local video store.

Joost is giving beta testers a peak into their blockbuster deals by creating channels such as [email protected], featuring musician interviews from Canada’s MuchMusic. I’m expecting a wider range of content in the future, in light of Joost’s partnership with CHUM TV (who owns MuchMusic and many other networks). Right now, though, it’s hard to get excited by 20 minutes of Beyonce and John Mayer. Maybe I’m too old for what Joost is dishing out.

But then a cool channel reels me back in. National Geographic takes advantage of Joost’s impressive visuals while Off the Fence Docs contains short films that are both intriguing and network-worthy. The geek in me couldn’t help but revel in the content found on GameStar TV, awash with video game news and reviews. And Saturday Morning TV lets me relive my childhood with reruns of Rocky & Bullwinkle and other classic ‘toons.

As you can tell, Joost offers a mixed bag of programming, so far, making the beta less-than-desirable for ardent TV watchers accustomed to top-notch dramas and comedies. But the final version could have CBS ratings champions like CSI and The Amazing Race, along with Comedy Central’s winners. It’s hasty to judge Joost based on the content available today, since that will definitely change over the next few months. 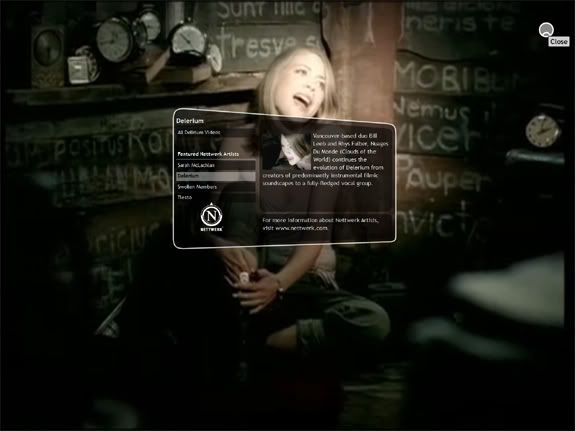 You’re used to 2D TV – a flat stream of moving pictures. But Joost adds another dimension to your viewing. Channels have interactive displays where you can discover a wealth of behind-the-scenes material. Click the icon at the top of the screen and you’ll find a bundle of creative extras that bring shows to life in new ways.

Interactivity
And finally, Joost’s interactive widgets deserve a mention. To give Web-TV fans added layers, Joost offers online chat, news tickers and ratings (where I can score a show I’m watching). At this stage, the chat windows are deserted and the news tickers only display Joost-related headlines, but the widgets have great potential to give users a wide range of interactive options. Down the road, perhaps I can email producers of a certain show with a simple click, or find out sports scores of my hometown team without ever leaving Joost.

Conclusion
I dropped an all-important word in the last paragraph that deserves a second mention: potential. Joost is still a baby — heck, it’s an embryo, really — so it still has to grow up in order to reach a plateau of unparalleled success. But the warning signs are there: high-quality visuals, intuitive controls, excellent navigation tools, and interactive widgets that merely scratch the surface of what the app can offer. (Plus, rumours abound that Apple TV and Joost work together like Jordan and Pippen.) I have faith the Joost team will use tester feedback to turn Joost into one of the biggest threats to mainstream media the world has ever seen.

In this article:internet television, joost, Review