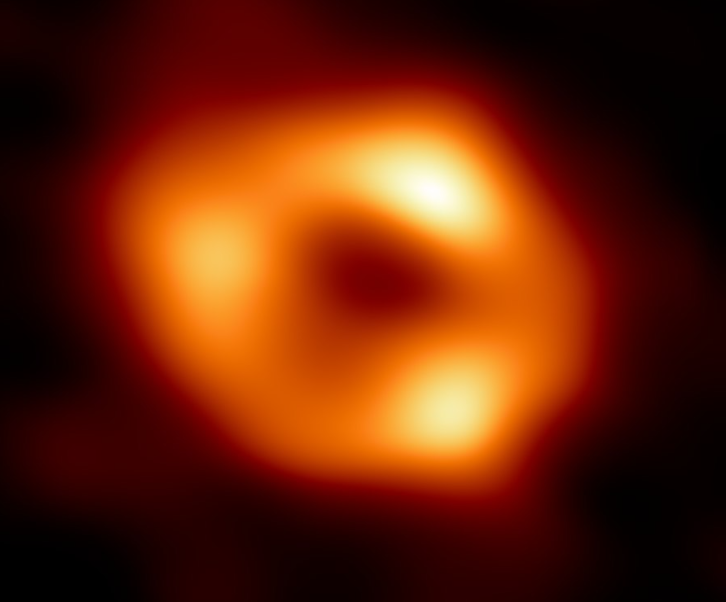 For the first time, astronomers have captured an image of the supermassive black hole at the center of our galaxy.

This particular black hole is not the voracious cosmic destroyer that black holes are made out to be; astronomers Thursday called it a “gentle giant” on a near-starvation diet, reports CTV News Canada.

Our galaxy’s black hole is called Sagittarius A*, or Sgr A* – and is the second one ever to be imaged. The feat was accomplished by the same Event Horizon Telescope (EHT) international collaboration that in 2019 unveiled the first photo of a black hole – that one residing at the heart of a different galaxy.

University of Arizona astronomer Feryal Özel, at a news conference in Washington, hailed “the first direct image of the gentle giant in the center of our galaxy,” showing a glowing ring of red, yellow, and white surrounding a darker center.

Ozel also noted that the picture also confirms Albert Einstein’s general theory of relativity: The black hole is precisely the size that Einstein’s equations dictate. It is about the size of the orbit of Mercury around our sun.

Sagittarius A* is 4 million times more massive than our sun and is located about 26,000 light-years – the distance light travels in a year, 5.9 trillion miles (9.5 trillion km) – from Earth.

Johnson went on to explain: “If Sgr A* were a person, it would consume a single grain of rice every million years.” It is putting out only a few hundred times the energy of the sun despite being much more massive.

It has taken five years for astronomers to capture and confirm this image and discovery. Previously, scientists observed stars orbiting some invisible, massive object at the galactic center. The results of this groundbreaking discovery were published Thursday in a special issue of The Astrophysical Journal Letters.

The discovery was made possible by more than 300 researchers from 80 institutions working with a network of eight different radio telescopes around the globe that make up the Event Horizon Telescope.

“This image is a testament to what we can accomplish when as a global research community, we bring our brightest minds together to make the seemingly impossible, possible,” National Science Foundation Director Sethuraman Panchanathan said in a statement. “Language, continents, and even the galaxy can’t stand in the way of what humanity can accomplish when we come together for the greater good of all.”