The device was created by Samsung’s C-Lab, a place where employees can go to build unique products outside their usual work. Called Entrim 4D, the headphones use electrodes to deliver electrical signals to a nerve in the inner ear, letting the wearer feel motion in virtual reality content.
Motion data is sent through the electrode to the ear where it is interpreted by the brain as real movement. The wearer can sense changes in direction, acceleration and speed, adding another layer of immersion to virtual reality media. With the right data inputs, the user can feel like they are flying through the world shown on the headset’s display.
Entrim 4D has been built by a team of hardware professionals, software engineers and biomedical engineering experts. It uses Galvanic Vestibular Stimulation (GVS) to send electrical signals to nerves in the ear, a proven and safe technique to influence the mind.
Samsung hopes the headset will turn virtual reality into a “whole body” experience. Current headsets such as the Oculus Rift and HTC Vive focus primarily on visual stimulation and don’t provide any physical feeling, restricting the user’s immersion in the content. 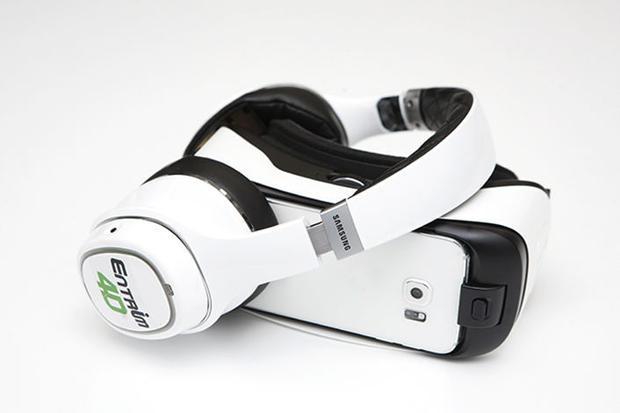 “Virtual reality shouldn’t be experienced only with the eyes,” said Steve Jung, Entrim 4D’s Creative Leader. “With Entrim 4D, we hope that people can experience VR the way it was meant to be – with their whole bodies.”
Entrim 4D brings another feature to the table. Samsung says that it could help to eradicate motion sickness induced by virtual reality experiences. Motion sickness occurs as a response to the jarring effect of navigating around a VR world while remaining in the same physical space. Entrim 4D could solve this as it allows the user to feel motion and a greater sense of space, avoiding the nausea and headaches associated with virtual reality.
Mashable wrote that the headset is “surprisingly effective” after trying an early version of Entrim 4D. “The demo switched between turning the motion effects on and off and the difference was dramatic,” said Mashable writer Karissa Bell after driving round a virtual race track. “When the effects were on, I found that not only did it feel more realistic, I was far better at steering myself around the track. ”
Samsung claims that the headphones create an “unrivalled entertainment experience” that synchronises your body with the movements you make in virtual worlds. It has been testing the system with over 1,500 people and has gathered data on 30 different kinds of human movement pattern.
Entrim 4D is still in early development and it is unlikely to become publicly available any time soon. Samsung is pitching it as a way to make virtual reality more realistic and immersive though, a solution to a problem that the fledgling VR industry has yet to solve.