“Tom” uses GPS, artificial intelligence and smartphone technology to digitally map Butler’s field. The robot monitors the individual plants in the field and then analyses each plant to identify whether it is a crop or a weed; feeding the data back to the AI to be digitally mapped.

Tom is the creation of the Small Robot Company. The British company was co-founded in 2017 by experienced entrepreneur Ben Scott-Robinson and fourth-generation farmer Sam Watson-Jones. The entrepreneurs were inspired by the work of Simon Blackmore in the National Centre for Precision Farming at Harper Adams.

Blackmore had a vision – Replacing much of the work done by heavy tractors with a series of small smart, lightweight robots. Research led to the development of a concept of Farming as a Service (FaaS), and Small Robot Company was born.

smallrobotco. We can't wait to hear more about this uxcrunch event next Tuesday 27th! CnpkWjTGkU

Farming has joined the technology age
Tom is just one of several small robots created by the company. The Small Robot Company cites the stress of increasing costs of farming over the last 30 years, while revenues and yields have remained static; as one reason why many arable farms are going out of business.

The British startup’s goal is to drastically cut down on fertilizer and pesticide use to lower costs and boost profits for struggling farmers, while at the same time, increasing production and lowering the environmental impact of farming. To do this requires rethinking of how farming is done now – and how farming can be done in the future.

“If we can keep our costs to an absolute minimum by being on the leading edge of technologies as one method of doing that, then that’s a really, really good thing,” said Butler, one of 20 British farmers enlisted in a yearlong trial, according to CTV News.

HUGE week! Unveiled our Harry prototype robot AgriTechEast – we’re hugely grateful to early support from them & IET the_MTC_org, who funded Harry’s development. One year ago all we had was a concept. Now we have both robots & AI. Rapid progress indeed! bhvVgUnubC

“What we’re doing is stuff that people can’t do,” said Ben Scott-Robinson, co-founder of the Small Robot Company, reports The Chronicle. “It’s not physically possible for a farmer to go round and check each individual plant and then treat that plant individually. That’s only possible when you have something as tireless as a robot and as focused and accurate as an AI to be able to achieve that.”

Meet the hard-working robots
“Tom” lives on your farm and has its very own “kennel” it goes back to when it needs to recharge itself. There he also downloads the gigabytes of data he has collected for analysis. His job is to digitalize your fields, monitoring them on a plant by plant basis, keeping track of the health and development of each plant.

Tom is designed to work alongside a comprehensive digital crop data model in combination with WILMA, the company’s AI-driven operating system. WILMA digests the sum of all farming knowledge and applies it to the information gathered about the crop.

Tom is chatty and curious say his creators – while “Dick” is ruthless in its efficiency. Dick lives at Small Robot Central and is brought out to your farm when he is needed. Dick micro-sprays each plant with fertilizers or chemicals as required to help it thrive. Dick precisely sprays the plant and puts the fertilizer onto the roots.

Dick is ruthless when it comes to weed control. using non-chemical weed control to isolate each individual weed and eradicates them to stop them competing with the crop. Actually, Dick has three ways to deal with weeds. He can micro-spray a tiny amount of the chemical on the weed, burn them, or crush the weed as it comes out of the ground.

Besides Tom and Dick, “Harry” is the drilling and planting member of the team. A workhorse of a robot, Harry is measured and precise. Harry also resides at Small Robot Central, but he is at Wilma’s beck and call to go out to your farm whenever he is needed.

Harry is the world’s first robotic drill for combinable crops. He places individual seeds in the ground and accurately records exactly where he has placed them. Harry can do this with minimal soil disturbance and is so lightweight that there is no churning nor compaction of the soil. 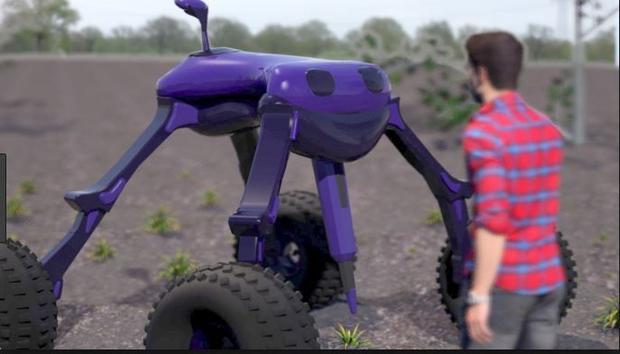 Harry passes information on where he has planted each seed back to Wilma, and if Wilma finds that a seed hasn’t germinated, she tells Harry, and he is light enough and precise enough to replace it.

The brains of the operation
Wilma is central to the whole operation. She is the “brains” of the operation, an artificial intelligence system. Wilma takes in the sum of all farming knowledge and applies it to the information gathered about the crop. The information compiled by Wilma can be used to help farmers make decisions that take into account agronomy, soil science, and market conditions.

“What we’re doing is stuff that people can’t do,” said Ben Scott-Robinson, co-founder of the Small Robot Company. “It’s not physically possible for a farmer to go round and check each individual plant and then treat that plant individually. That’s only possible when you have something as tireless as a robot and as focused and accurate as an AI to be able to achieve that.”

This is Tom. He’s a prototype robot to help farmers look after their crops. He and his robot helpers can detect weeds, damaged plants and solve other issues which require a keen eye if not ‘green fingers’. ZIDdMQ6Dmg

Even though the commercial sale of farming robots is still several years away, the Small Robot Company plans to sell its services as a monthly subscription, charging 600 pounds per hectare a year. The plan is called Farming as a Service or FAAS.

This kind of subscription plan allows farmers to take advantage of technology, but without any of the risks. The company’s website says farmers do not own any of the hardware or worry about hardware becoming redundant or out of date. There is no machinery sitting around for 11 months of the year. You will not have huge capital outlays when things go wrong. You have no risk.