Of course, the Linx isn’t going to win any contests for any of its hardware. None of it is outstanding and some of it is shockingly bad. However, when all the cheap components are joined together, an inexplicably – and unexpectedly – good tablet is formed.
I’ve been the owner of the Linx 7 for 11 days and in that time I’ve grown to really like it. I will mention that I didn’t actually spend any of my own money on it as it was a birthday gift from relatives. I have been aware of its existence in the technology world for some time though and was pleasantly surprised when I actually got to use the tablet. 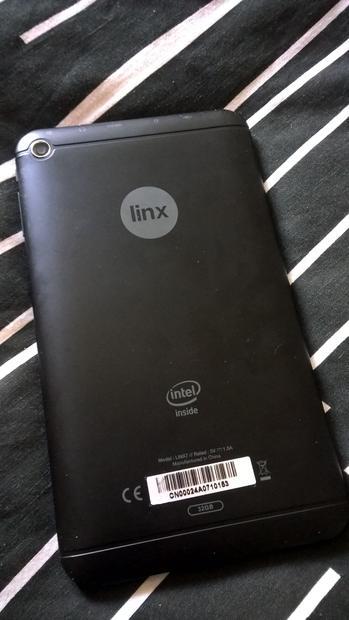 The Linx 7 tablet computer
James Walker
Initial impressions were actually largely positive. The tablet feels surprisingly well made and also looks quite smart. It doesn’t flex or bend under pressure and is comfortable to hold in the hand.
The display dominates the front of the device although it is surrounded by sizeable bezels. These aren’t too much of an issue though and indeed make it easier to use some Windows 8 touch commands, including opening the Charms menu from the side of the screen and switching apps. 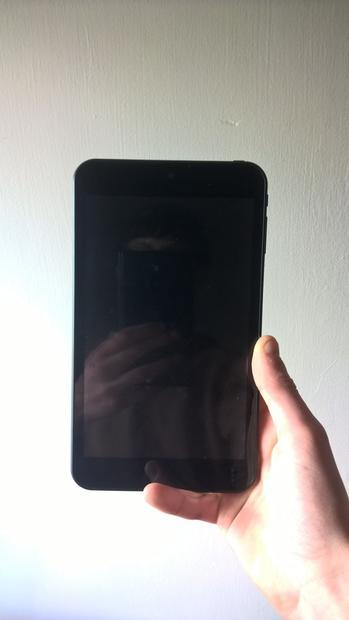 The Linx 7 tablet computer
James Walker
The right side of the device holds the power button and the volume rocker. The top contains a 3.5mm audio port, micro SD card slot, micro HDMI port and a micro USB port. This can be turned into a full-size USB port to connect hard drives or mice to with a USB OTG adapter. I was pleasantly surprised to find one of these in the box of the Linx.
My main annoyance with the design of the tablet is the positioning of the Start button. Linx opted to put a physical one on the top of the tablet but this is very hard to reach in either portrait or landscape mode. A capacitive one on the front bezel would have been much better. 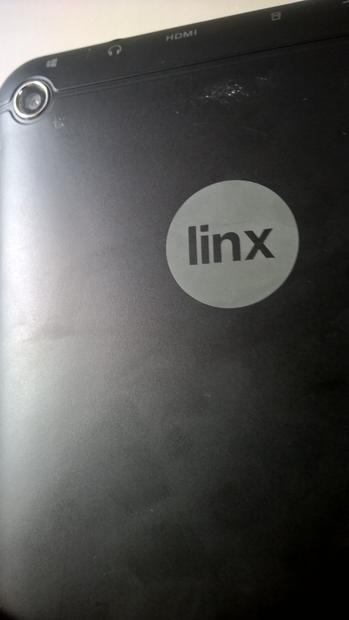 The Linx 7 tablet computer
James Walker
Turning the tablet on for the first time, I was pleased to find that the Linx powered through Windows setup in a very respectable time and soon dropped me at the Start screen. I was very pleasantly surprised to find absolutely no preinstalled junk. The only things installed with the tablet are device drivers. Apart from the Linx logo being shown on the startup screen, this is truly stock Windows. From this point forward, it gets interesting.
Using the Start screen and modern apps on the Linx is a surprisingly enjoyable experience. I enabled the “show more tiles” option so I can have a bit more information on Start but the sizing is still usable at this size, if a little small. 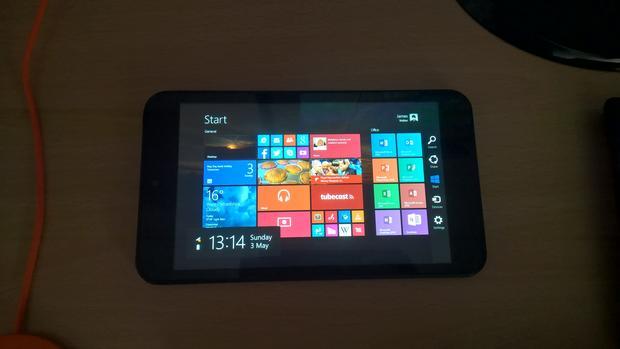 The Linx 7 tablet computer
James Walker
Unfortunately, the Start screen highlights a major issue with the display on the Linx. I won’t critique the 1280×800 resolution too much. I am a massive fan of high resolution displays but on this anything bigger would have made it unusable with touch. The issue here is the accuracy of the display.
Brightness is adequate indoors. Take it outside, and unfortunately you can’t see a thing in the sunlight. The display is also very reflective which doesn’t help things. Even this isn’t my primary concern though.
The issue is that the Linx simply cannot reproduce colour correctly. Next to my computer monitor, every live tile is washed out and an incorrect shade – sometimes even bordering on a completely different colour. The effect is most noticeable on the red end of the spectrum but blues are affected too. 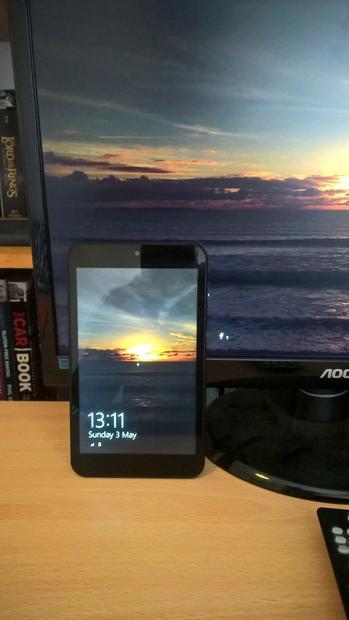 Reproduction of blacks is nearly non-existent on the Linx
James Walker
It is a little concerning to see so much colour loss and it could impede the watching of videos where I noted how some introductions appeared a very different colour to what I know. I am disappointed with the display of the Linx, despite its price. It is fine for general use and web browsing but colour accuracy is in places non-existent.
It’s not all bad though. The tablet is powered by a quad-core Intel Atom Bay Trail processor running at 1.33GHz. It has 1GB of RAM and 32GB of internal storage. The Windows installation leaves you with about 24GB free to use for your apps, files and programs unless you add an SD card. 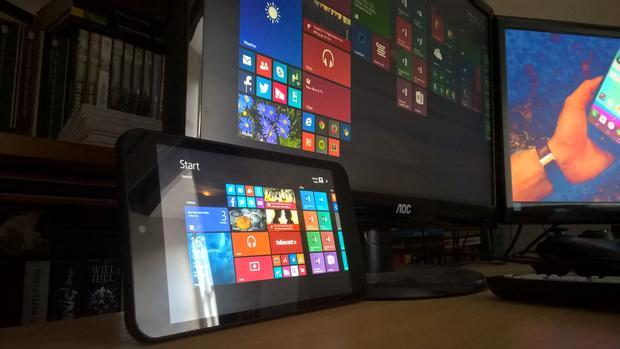 The Linx 7 tablet computer
James Walker
I am going to clear something up right now and very quickly. The Linx has a rear camera and a front camera. Both are shockingly awful. They are the only genuinely bad bits of hardware on it though and I am prepared to overlook this seeing as I never intended to use cameras on a tablet.
The results are really terrible in any lighting conditions though. Filled with noise, blurred details and washed out colour, the Linx produces the worst photos I have seen since I had a 0.3MP Samsung feature phone.
Back to the positive side, the processor is perfectly adept at powering modern apps from the Store. News and Weather are both responsive while Photos makes a lot more sense on a tablet than on a PC. The Atom is also capable of light gaming, with all the traditional mobile offerings running well. I noticed a few dropped frames and stutters in Asphalt 8 initially but they cleared up after a few minutes of playing; I put this down to active background tasks still running. 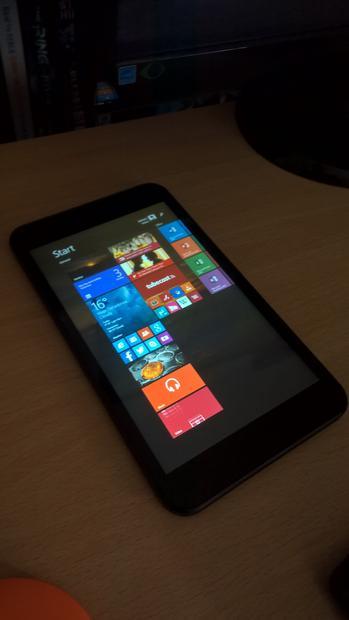 The Linx 7 tablet computer
James Walker
Advertisement. Scroll to continue reading.
On the desktop, the story is very different. Anyone who has seen or used a 7-inch Windows tablet will know that the desktop can often be a little too small to use. Out of the box, the Linx has its scaling set to 125% where it was actually usable. I changed this though – and I don’t recommend you do too.
The thing is that the Linx’s 7-inch display is only at a 1280×800 resolution. At 125% scaling, everything takes up too much space for my liking and you effectively end up with 25% less screen resolution. I changed it to 100% scaling. If you do this too, be warned! Although it now looks like a normal 1280×800 desktop PC, icons really are too small to touch in all areas of the OS.
This doesn’t bother me personally. I got the Linx for two reasons – I want to be able to code at lunchtimes at my school and I want to be able to write these articles at lunchtimes at my school. Both of these tasks I carry out with a Bluetooth keyboard connected. With good knowledge of nearly all Windows keyboard shortcuts, I rarely resort to using the desktop with touch. 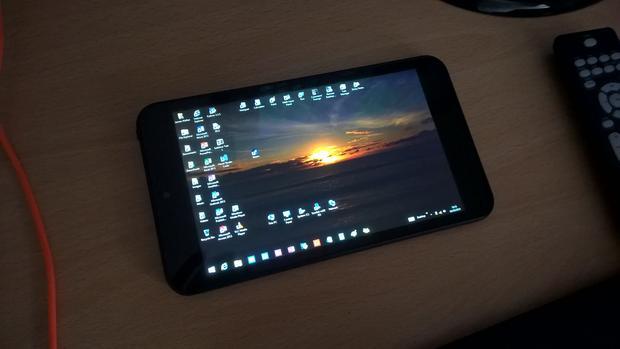 The Linx 7 tablet computer
James Walker
I realise this is an exceptional usage scenario though and not at all typical for a 7-inch tablet. If you get the Linx, I strongly recommend that you leave the desktop at 125% scaling – or maybe even increase it – if you intend to use touch on it. As previously mentioned, the scaling of modern apps from the store has never been an issue.
With that rather lengthy explanation of my scaling preferences cleared up, here is how the Linx actually performs on the desktop. The main impediment is the astonishingly low 1GB of RAM. That is the only issue I have found though.
The 32GB SSD opens programs as quickly as the Samsung 840 EVO SSD in my computer. I was pleased to find that opening programs from SD added no visible performance delay, although I do have a 64GB Sandisk Ultra card in it. If you want to run programs from SD, a card ranked as performance class 10 is an absolute must.
The Atom kept up with all of the tasks that I gave it. I’m a programmer and – in another slightly unusual usage setting – I’ve installed many programming tools onto the Linx.
Editor Sublime Text works without a hitch when running from SD. Its heavy emphasis on keyboard shortcuts means you never have to touch the tiny menus. I have installed programming language Python and it runs just fine. I’ve even installed the Wamp web server for development purposes. Again, the Linx seemed happy to accept this illogical purpose. 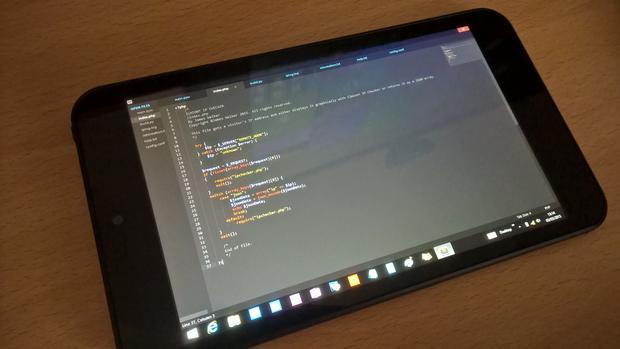 Coding on a 7-inch tablet? Sure, if you have a Bluetooth keyboard handy
James Walker
The only issue is the painfully low RAM. Try to do too much at one time and you will crash everything. Idling on the desktop with no apps open, you only have 400MB of RAM free to open apps with. This is pitiful in the modern day. Windows Explorer crashes were all too common when I overstepped the mark and I think it a shame given how admirably the processor performs, even when doing things it really isn’t designed for. 2GB of RAM would have improved things significantly.
The 1GB was required for one very good reason though – keeping costs down. In the UK, the Linx 7 can be picked up for just £65 – and often less. If you are wondering, Linx has an official retail presence in the UK (its harder to find in the US) and you can buy it directly from Amazon.
This isn’t some rogue Chinese import but rather a serious device from a serious manufacturer. It is astounding value for a full Windows device that you can run most apps on and even things beyond what you may expect, as I found in my high-intensity testing. I intend to keep using the Linx daily in the manner that I describe in this article and indeed you can expect many of my future Digital Journal articles to have been written with it and the Inateck BK1003E keyboard I reviewed a while ago.
The Linx has the potential to become a £65 computer. You can connect it to a monitor, keyboard and mouse. Theoretically, the Linx could do everything an average user would want. 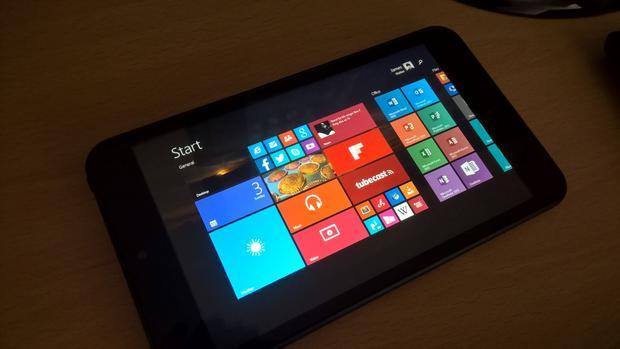 The Linx 7 tablet computer
James Walker
This has been an extraordinary review to do. I have known about the Linx for a long time and wondered about its quality. I ended up getting it as a gift and found it to better than I thought it would be. If you are looking for a cheap Windows tablet, I would genuinely recommend the Linx 7. You won’t have heard of the name but as long as you don’t try to do too much at once I think it should keep any user happy, seeing how it handles serious journalism tasks and being a web server alongside the reading webpages and watching YouTube that it was actually designed for.
I have only two strong criticisms of the Linx: the display is awful and it needs more RAM. It has a strong processor and good performance though and I haven’t been put off using it. This review has been written entirely on it using the OneNote app in the Windows Store and it will be remaining in my daily “device fleet” for a long time to come, seeing as it should be eligible for the Windows 10 upgrade this summer.
In this article:Atom, Intel, linx, microsoft, Processor, Tablet, windows, windows 8