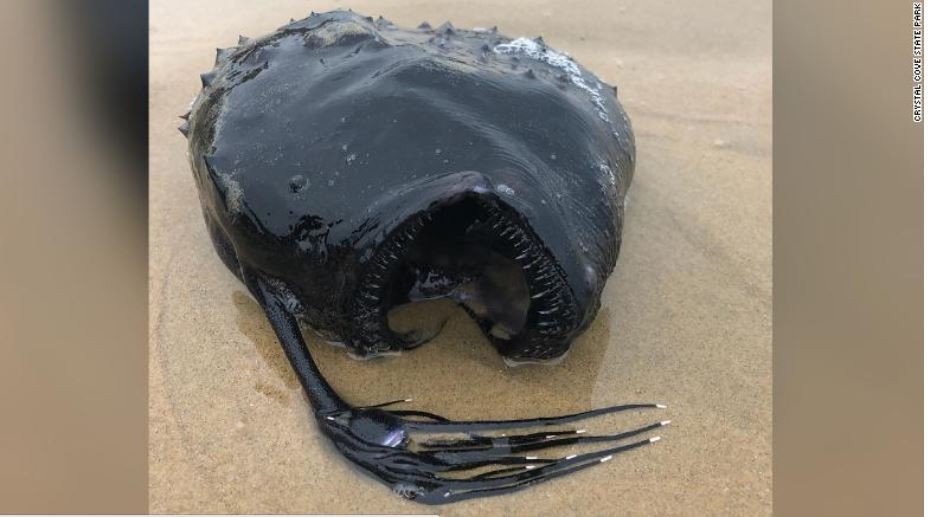 A beachgoer was shocked to discover a rarely-spotted fish, with a monstrous-looking body shaped like a football, washed up at a California beach last week.

The near-black fish with a gaping mouth and razor-sharp teeth lay on the sand on the shore of Crystal Cove State Park’s Marine Protected Area in Laguna Beach last Friday. The park shared images of the fish on social media and identified it as being most likely the Pacific Football Fish.

“To see an actual angler fish intact is very rare and it is unknown how or why the fish ended up on the shore,” reads the Facebook post, according to CBS News.

The Pacific Coast football fish are in the family Himantolophidae, and are globose, deep-sea anglerfishes found in tropical and subtropical waters of the Atlantic, Indian, and the Pacific Ocean. There are 22 species, all in the single genus Himantolophus.

As it is with most deep-sea anglerfish, sexual dimorphism goes to the extreme.  T^he largest females may exceed lengths of 60 centimeters (24 inches) and are globose in shape, whereas males do not exceed 4 centemeters (1.25 inches) as adults and are comparatively fusiform.

“Only females possess a long stalk on the head with bioluminescent tips used as a lure to entice prey in the darkness of waters as deep as 3,000 feet!” the park wrote. “Their teeth, like pointed shards of glass, are transparent and their large mouth is capable of sucking up and swallowing prey the size of their own body.”

“Males latch onto the female with their teeth and become ‘sexual parasites,’ eventually coalescing with the female until nothing is left of their form but their testes for reproduction,” park officials said.

According to CTV News Canada, the body of the fish is being held by the California Department of Fish & Wildlife. It is expected to be studied for research and educational purposes.