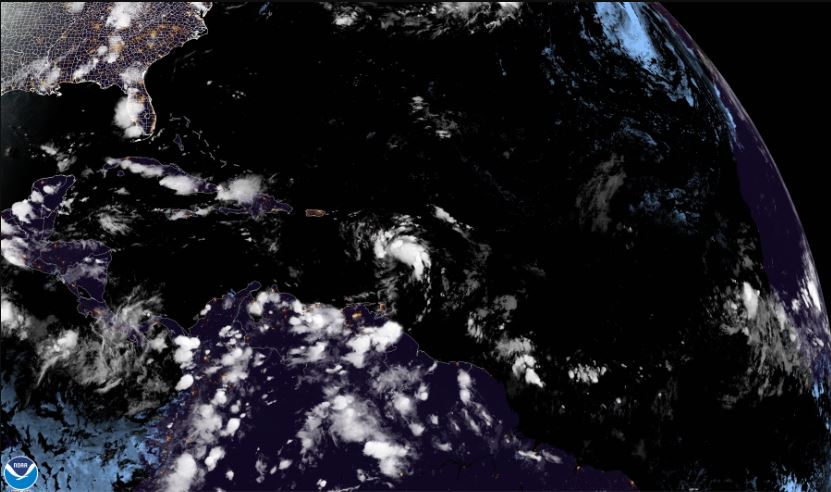 The first named tropical system in the Atlantic since early July could form by Tuesday, and tropical storm watches were issued for Puerto Rico and the US Virgin Islands Monday this evening, according to the National; Hurricane Center.

At the 8:00 p.m. advisory, the cyclone was located about 165 miles east southeast of Dominica and is moving 15 mph to the west-northwest toward the Lesser Antilles with maximum sustained winds of 35 mph (55 kph).

By Tuesday, it will move toward Puerto Rico and the Virgin Islands, making its way to Hispaniola by midweek. Tropical Storm Watches are in effect across portions of the Caribbean Islands.

Besides Puerto Rico and the US Virgin Islands, tropical storm watches were issued by the respective governments of Guadeloupe, Martinique, and Dominica.

A Tropical Storm Watch means that tropical storm conditions are possible within the next 48 hours.

Over the next few days, conditions will become increasingly conducive for further formation. Warm sea surface temperatures in the region will feed the disturbance and allow it to strengthen.

“The system could reach tropical storm strength before it reaches the Virgin Islands and Puerto Rico tomorrow. Even if this system doesn’t develop into a storm, it will likely bring flooding. Flash flood watches cover all of Puerto Rico and the Virgin Islands where 2-3 inches of rain, with locally higher amounts, are expected,” said CNN meteorologist Dave Hennen.

The tail-end of the forecast cone is through the central Florida peninsula reports WTXL.com. As Potential Tropical Cyclone Six moves over land this week, in addition to encountering some drier air and perhaps an increase in wind shear, its track and intensity will likely change.