The company announced the feature in a blog post today, declaring “People really want ad-blocking technology.” It has decided to take the controversial move of building an ad blocker directly into the heart of Opera, a decision it says “will accelerate the change that the ad industry needs to pursue.”
Opera explains that sluggish, insecure advertising and fake download buttons are turning people away from the Internet and the publishers that use it. It wants to force the industry to look for a better solution by giving consumers the option of disabling adverts altogether, eliminating the need for browser extensions in the process.
“People are clearly sending a signal to brands and advertisers that the current situation must change,” the company said.
“It’s 2016, and we believe it’s time for ads to be lighter and faster. There’s the IAB L.E.A.N. initiative for better ads but where are the better ads themselves? Instead, we see a primer on how to convince users to disable adblocking. It’s a good step, but what if ads could be better, less intrusive and not slow down the browsing so significantly?” 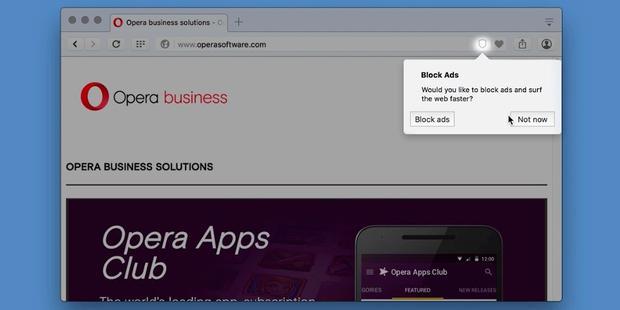 Native ad blocking will be disabled by default. As a user browses the Internet, they will see a suggestion to enable ad-blocking on websites that contain intrusive ads. Ad-blocking can be controlled per website by toggling a switch in the browser’s address bar.
Opera says the process has better performance than traditional plugin solutions. It blocks ads at the earliest point possible, when the browser engine receives a request to visit the address of an ad provider. Whereas extensions spend time checking whether elements of webpages are present in their “remove” lists, Opera’s native ad block can tap into the fast algorithms within its engine to accelerate this step, making ad blocking more efficient. 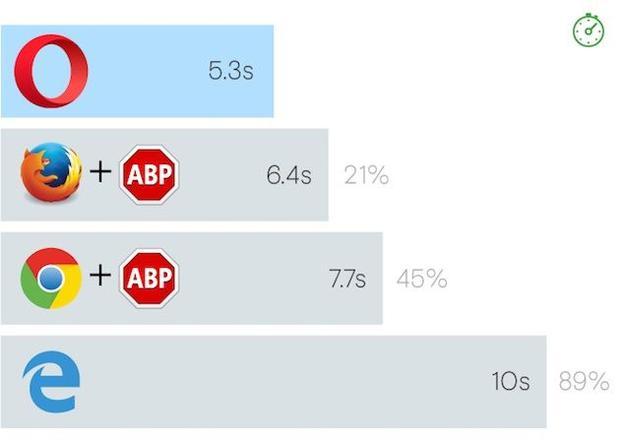 In testing, Opera managed to load pages 45 percent faster than Google Chrome with the popular Adblock Plus extension installed. It was 21 percent faster than Mozilla Firefox with Adblock Plus and 89 percent faster than Microsoft Edge, currently lacking support for any browser extensions.
Naturally, not everyone will be pleased with Opera’s decision. The majority of publishers online are reliant on ad revenue to keep their business alive. Providing every user of a major web browser with an instant way to eradicate ads could lead to a noticeable decline in income, harming the content that users aim to improve.
However, Opera insists it is trying to help the Internet as a whole move to a new era beyond ads. It notes that it is possible to use advertising on websites responsibly in a way that doesn’t dramatically slow down performance.
It calls out content-heavy tech news sites CNET and TechCrunch as credit-worthy examples of this. Both publishers use advertising extensively but “only marginal delays” are experienced in page loading as a result. It is possible to use advertising without harming user experience, something Opera wants the rest of the Internet to realize. It claims some top-ranking websites would load as much as 90 percent faster if they were stripped of adverts. 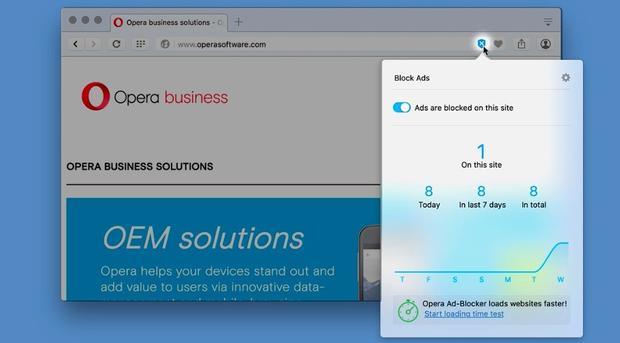 The use of ad blockers has risen significantly in the past couple of years. From 2014 to 2015, the number of people with a desktop ad blocker installed rose 41% worldwide, highlighting the demand for the feature.
Ad blockers are also used on mobile devices where they can speed up websites even more significantly than on PCs. Last month, UK mobile operator Three announced it will begin to block all online advertising automatically for its customers, saying “irrelevant and excessive mobile ads annoy customers and affect their overall network experience.”
Opera hasn’t given a timeframe for when it will release its ad blocker. In February, the company was bought by a consortium of Chinese companies for $1.2 billion after publishing a record $193.5 million in fourth-quarter revenue, led by its mobile advertising business.