With Windows 10, Microsoft is working hard to ensure that all of its users are running the latest version of the operating system. It has decided that the best way to go about this is to force updates onto computers without any user intervention, making them download and install automatically before prompting for a restart.
To get updates delivered quickly to as many computers as possible, Microsoft has introduced another new “feature” to Windows Update. The software now operates in a similar manner to torrents, collecting files from different destinations to alleviate the stress on Microsoft’s servers and potentially speed up downloads.
Microsoft describes it as “updates from more than one place”, explaining that you can download Windows updates from sources “in addition to Microsoft.” When your Windows 10 computer checks for and downloads updates it may get the files from other computers online that already have them installed.
In return, your machine has to do its bit. Microsoft states “your PC may also send parts of previously downloaded Windows updates and apps to PCs on your local network or PCs on the Internet.” Some users may be uncomfortable at the thought of that while others may worry about the strain on their bandwidth.
The fears are not unfounded. If your computer is working to upload Windows Update files to others then that is taking some upload bandwidth that you won’t be able to use for your own purposes. For people with slow Internet connections – or upload data limits – then it may have a noticeable impact on other network activity.
The feature can be disabled but it is quite well hidden on a page several layers deep in the Settings app. You can choose to disable it entirely or change it so that your computer only sends files to – and receives files from – other devices on your home network. This could improve Windows Update download performance in a home setting, allowing your devices to quickly transfer the files between themselves. 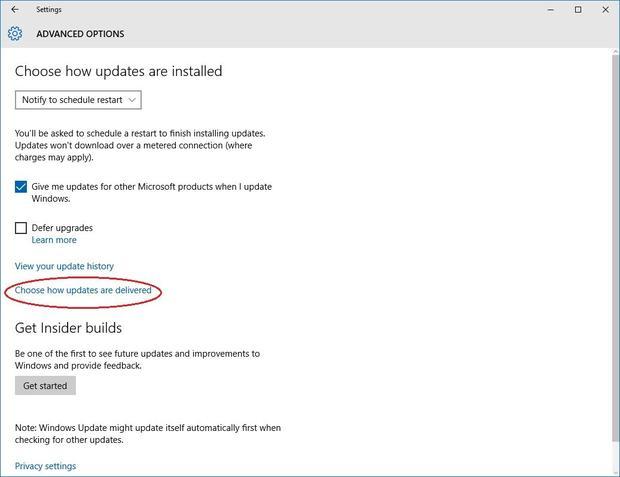 For example, if you are working on a desktop computer all day and updates are published then it will most likely download and install them automatically. If you then turn on a laptop or tablet in the evening, that device would search for and find the updates. It would consult with the other devices on your network to see if they already have them, leading the desktop computer to respond and say that it does. It could then send the files directly over your home network to the laptop at a much faster speed than if the laptop had to download them again over the Internet.
To configure the behaviour of this feature, begin by opening the Settings app (keyboard shortcut Win+I). Click “Update & security”, followed by “Windows Update”. Look for the “Advanced options” link at the bottom of the page and click it to get to “Choose how updates are installed”. Find the link for “Choose how updates are delivered”, above the large “Get Insider builds” sub-heading, and you’ll finally arrive at the rather disguised settings page that lets you disable the torrent-like behaviour entirely or change it to local network only. 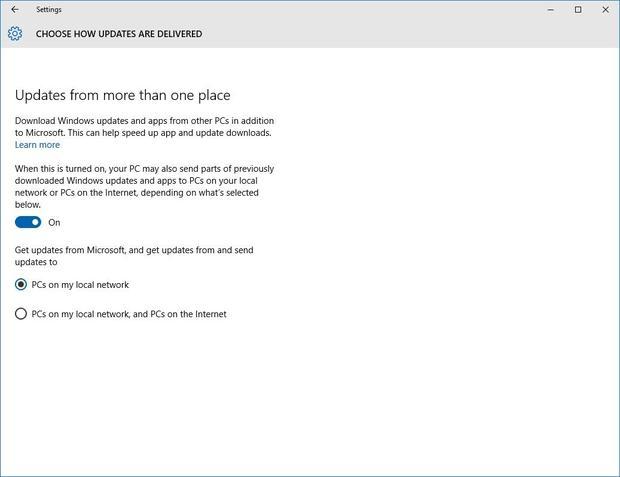 Which option you go for is of course your choice. Personally, I’ve changed the setting to “PCs on my local network” because I’m happy for my devices to help each other out but don’t want them trying to upload things to the Internet. I’m not mean-spirited but I am on an awful rural broadband connection. Every bit of upload bandwidth is precious to me, as it probably is to other Windows 10 users out there.
This is just one of several Windows 10 “features” that users have frequently taken exception to. Many think that sharing over the Internet should not be enabled by default. Microsoft does not check to see if a user’s Internet connection is capable of handling the upload of Windows Update files as an ordinary task and in some cases – mine included – it simply won’t be. If you have slow upload speeds or don’t want your computer to upload files to others without you knowing then it’s probably best to disable this today.