A team of archaeologists from the Israel Antiquities Authority and the University of North Carolina at Chapel Hill has been excavating the 5th-century CE Huqoq Synagogue, about three miles west of Capernaum and Migdal (Magdala) annually since 2011. 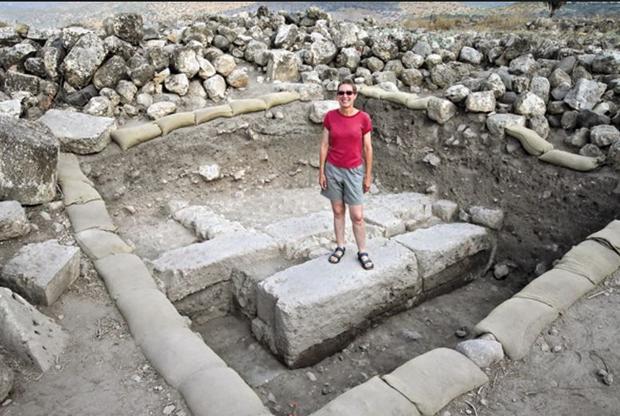 Previous digs at the 1,700-year-old synagogue have uncovered exquisite limestone carvings, including a mosaic found in 2012 of the Biblical hero Samson. At the time, UNC archaeologist Jodi Magness said, “This discovery is significant because only a small number Late Roman synagogue buildings are decorated with mosaics showing biblical scenes, and only two others have scenes with Samson.

The International Business Times reports that in the Samson mosaic, one scene tells the story of Samson tying flaming torches to the tails of foxes ( Judges 15:4). The second scene found a year later, shows Samson carrying the gate of Gaza on his back (Judges 16:3) 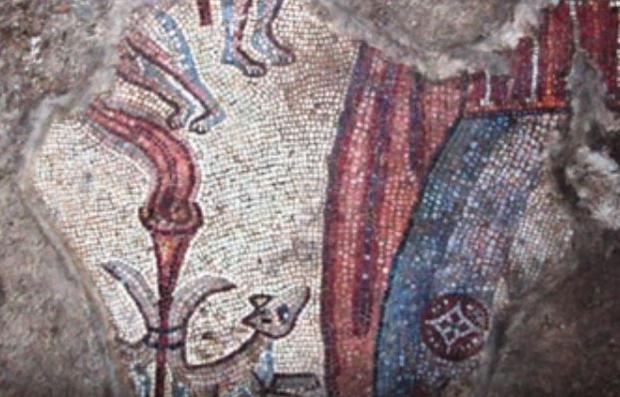 Noah’s Ark and the Parting of the Red Sea
The high artistic quality and the tiny size of the mosaic cubes used impressed the archaeologists in 2011, and this latest find is equally impressive. The team uncovered two panels, one depicting Noah’s Ark, and the other, the parting of the Red Sea.

“The panel with Noah’s Ark depicts an ark and pairs of animals, including elephants, leopards, donkeys, snakes, bears, lions, ostriches, camels, sheep, and goats,” the university said in a statement, reports the Times of Israel. 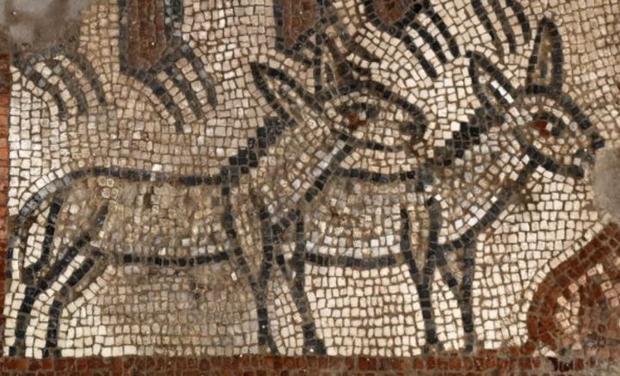 The animals went into the ark, two by two.
Ancient Jew Review

In the second panel, “the scene of the parting of the Red Sea shows Pharaoh’s soldiers being swallowed by large fish, surrounded by overturned chariots with horses and chariot drivers.”

In a statement, Magness said of the newly discovered mosaics: “These scenes are very rare in ancient synagogues.” The only other examples of Noah’s Ark have been found at Gerasa/Jerash in Jordan and Mopsuestia/Misis in Turkey

Magness, who also works at National Geographic, said that as for the parting of the Red Sea, there are only two other places where similar works have been found — at Khirbet Wadi Hamam in Israel and Dura Europos in Syria. Magness says the scene in Syria doesn’t show anyone being swallowed by a big fish, although it is a complete scene. 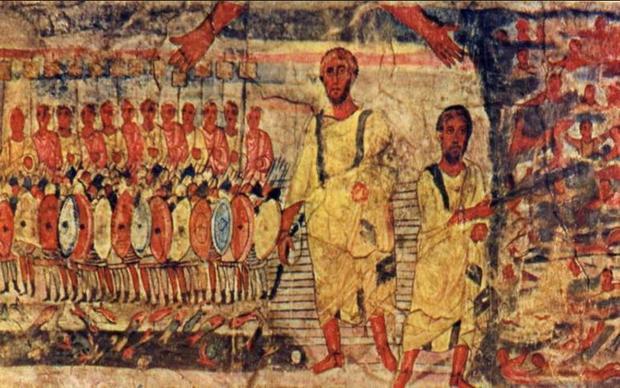 Hand of God in Exodus and the Crossing of the Red Sea wall painting Jews cross Red Sea pursued by Pharoah. Fresco from Dura Europos synagogue in Syria.
Pinterest/en.wiki2.org

An unusual mosaic found in 2012-2014
A mosaic excavated in the east aisle of the synagogue during the 2013-2014 digging season turned out to be the first non-biblical scene ever found in an ancient synagogue. According to a statement by UNC, the scene depicted a meeting between Alexander the Great and the Jewish high priest in Jerusalem. 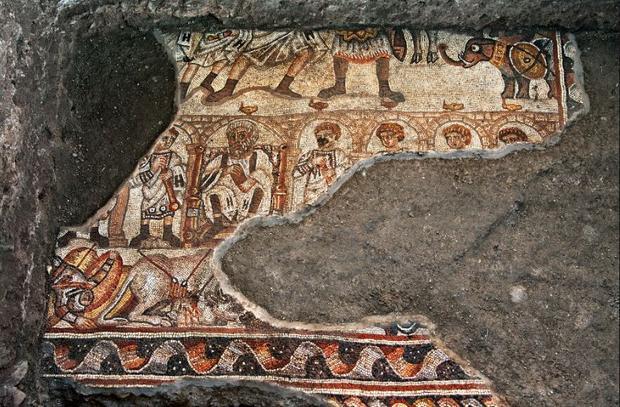 The Alexander the Great mosaic is complex, with three horizontal bands and features elephants outfitted in battle gear in one scene, and soldiers bearing shields and spears in a second scene. It is the top scene, a bit larger than the others, that is compelling.

The large horizontal band features two male figures, one is a man in a white robe with insignia showing his high status, while the other man is dressed in battle gear, a cloak of purple and the diadem of high office completing his wardrobe. 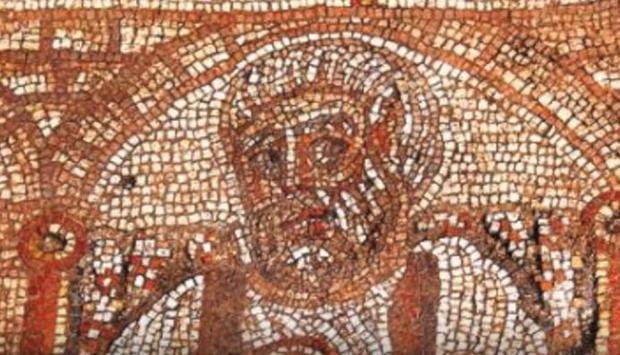 The top panel is believed to show a meeting between Alexander the Great and the High Priest of Jerusalem.
Ancient Jew Review

Magness says that although there could be a number of interpretations of the scene, she says, “My personal opinion is that what we have is a depiction of the legendary meeting between Alexander the Great and the Jewish high priest of Jerusalem. It’s a legend that developed and circulated among the Jews in the centuries after Alexander’s death and is preserved in a number of ancient sources.”