While the invention doesn’t create Star Trek “warp drive,” it has been calculated that it could generate speeds sufficient to reach Mars in 70 days, travel beyond the Solar System in 18 months or so — it took New Horizon nine years to get to Pluto — and make a round trip to explore alien life on all of Saturn’s moons in only three years.

These latest tests appear to confirm that we could be on the verge of an epoch-making leap forward in space travel — a breakthrough which might make intergalactic space exploration, encounters with alien life and colonization of distant planets a real possibility.

Originally, NASA scientists doubted the validity of their own results from the rocket tests, as the EMDrive (electromagnetic propulsion drive,) seemed to defy the laws of physics.

Back in April, NasaSpaceFlight.com reported that;

“Thrust measurements of the EMDrive defy classical physics’ expectations that such a closed (microwave) cavity should be unusable for space propulsion because of the law of conservation of momentum.”

However, The Mail Online explains that;

“The concept of an EmDrive engine is relatively simple. It provides thrust to a spacecraft by bouncing microwaves around in a closed container. Solar energy provides the electricity to power the microwaves, which means that no propellant is needed.”

Science Alert says that the drive creates huge amounts of propulsion without the need for rocket fuel;

“Instead, it’s apparently propelled forward by microwaves bouncing back and forth inside an enclosed chamber.” 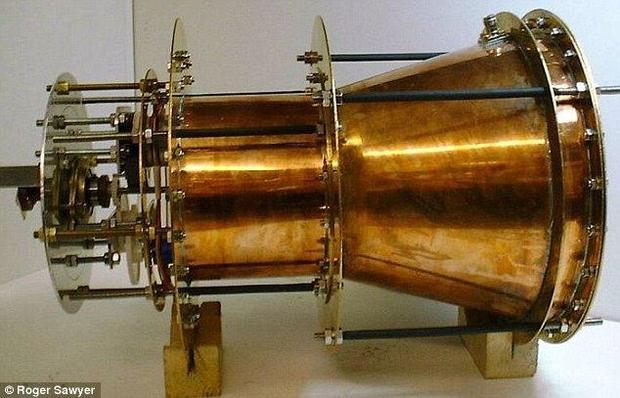 In doing so, the journal explains,

“it defies one of the fundamental concepts of physics – the conservation of momentum, which states that for something to be propelled forward, some kind of propellant needs to be pushed out in the opposite direction.”

For this reason, the concept was ignored or ridiculed by scientists, when it was first put forward in the early 2000s by British scientist, Roger Shawyer, and there are still many skeptics looking to find other reasons to explain why the rocket cannot be feasible.

However, Chinese scientists later built their own version, which worked. So NASA’s Eagleworks Laboratories also set about testing Shawyer’s rocket.

To everyone’s amazement, it seemed to work, and NASA’s experiments have now been confirmed by rigorous tests carried out by professor Martin Tajmar, at Dresden University of Technology in Germany, who presented his results at the 2015 American Institute for Aeronautics and Astronautics’ Propulsion and Energy Forum and Exposition in Florida two days ago.

“The obvious sources of error — air currents, leaking microwaves, ionisation — have long ago been ruled out. But this is the first time that someone with a well-equipped lab and a strong background in tracking experimental error has been involved, rather than engineers who may be unconsciously influenced by a desire to see it work.”

The problem is, however, nobody can yet explain this “impossible thrust” which is generated – something Shawyer estimated to be several thousand times greater than a normal photon rocket.

According to Hacked.com, Dr. Harold G. “Sonny” White at the Johnson Space Center (JSC) has suggested that;

“The EM Drive’s thrust is due to virtual particles in the quantum vacuum that behave like propellant ions in magneto-hydrodynamical propulsion systems, extracting “fuel” from the very fabric of space-time and eliminating the need to carry propellant.”

This would overturn some fundamental tenets of quantum physics because particles in the quantum vacuum cannot be ionised, so therefore you cannot push against it, says the Mail Online.

But as Wired.com commented;

“Some damage to our theories of physics is an acceptable payoff if we get a working space drive.”

Tajmar concluded his studies by saying;

“Additional tests need to be carried out to study the magnetic interaction of the power feeding lines used for the liquid metal contacts.”

“Nevertheless, we do observe thrusts close to the magnitude of the actual predictions after eliminating many possible error sources that should warrant further investigation into the phenomena.”

A Romanian engineer, Berca Lulian, has also carried out similar experiments which he has published, and which tend to confirm the current findings. Indeed, the new site EmDrive Wiki lists over a dozen other projects which are currently trying to replicate the results.

Commenting on the findings, NASA officials said online that: “There are many ‘absurd’ theories that have become reality over the years of scientific research.”

Until there is a theoretical explanation for what is happening, some skepticism in the scientific community is bound to continue. However, as Wired.com adds in another article;

“There is no accepted theoretical explanation of how high-temperature superconductors work either, but because the effect has been replicated so many times, nobody doubts that it happens.”