The Lumia 430 is powered by a dual-core Qualcomm® Snapdragon™ 1.2GHz processor which should be enough to keep it responsive in the generally smooth Windows Phone environment. It also has an encouraging 1GB of RAM and 8GB of storage, expandable with MicroSD, so most apps from the store can be downloaded and run.
It is a pocket-sized device with a 4-inch display that has a WVGA resolution of 800×480. This gives a reasonable pixel density of 235ppi. No 4G is present so you’ll have to make do with 3G. 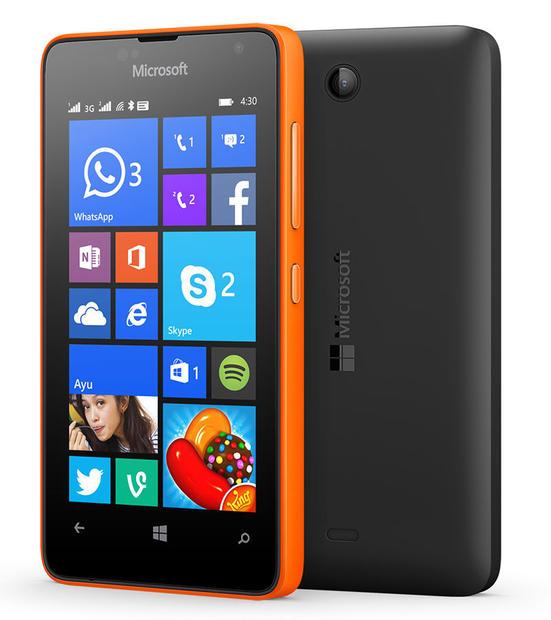 The phone falls short of offering an impressive camera with a measly 2MP rear shooter and 0.3MP front-facing unit. You won’t be capturing any masterpieces but then you can hardly expect to at this price point.
Other equipment includes Bluetooth 4.0 and proximity and ambient light sensors. The battery is a 1500mAh removable unit that should last a day’s usage on such a small device with only a dual-core processor.
Microsoft is hoping to attract buyers who want a full-featured smartphone but at a minimal cost. It is aimed at developing markets with support for dual SIM cards and will be offered from April in APAC, IMEA, Russia, Kazakhstan, Ukraine and Belarus in black or the distinctive Lumia orange colour.
The phone comes with Windows Phone 8.1 and Lumia Denim straight out of the box but will be upgraded to Windows 10 in the summer. The ultra-low $70 price point could make it an attractive proposition to those who want to enter the smartphone experience, use popular apps and take advantage of a guaranteed software update later this year.