The new Skype for Linux was announced by the Skype team this morning. The app is available in early-access alpha form today. There is currently no window for the full release. Microsoft warned that not all features have been implemented yet and the app is not a fully functioning Skype client.
It does have a number of features previously absent from Skype on Linux systems though. Microsoft abandoned its original client after version 4.3. The Windows desktop app is now at version 7.0, leaving the Linux community without a full-fledged experience.
With the new app, features like file, photo and video sharing are fully supported. There’s also a full selection of emoticons and a heavily revised interface that’s faster, cleaner and more modern. Microsoft asked Linux users to test the program and provide feedback on which features to implement next. Recent additions to the Windows client include support for calling in augmented reality with Microsoft HoloLens and digital assistant functionality through Skype bots.
In its announcement, Microsoft tried to dodge its neglect of Linux over the past two years. The open-source community has long accused Microsoft of leaving it out of new features, concentrating on Skype for Windows, the web and mobile devices. The Skype for Linux client has gradually fallen apart and ended up behind the times.
Microsoft said the new release “reaffirms” its “commitment” to the Linux community, “the launch of which ensures we can continue to support our Linux users in the years to come.”
“As we develop this new version of Skype for Linux, we need you to test, provide feedback and help us prioritize features. You will notice that with the Alpha version of Skype for Linux, which uses our next generation calling architecture, you will be able to call your friends and family on the latest versions of Skype on Windows, Mac, iOS and Android, but you won’t be able to make or receive calls to and from the previous versions of Skype for Linux. Please do provide as much feedback as you can on Skype for Linux Alpha, so we can continue to improve call connections and reliability.” 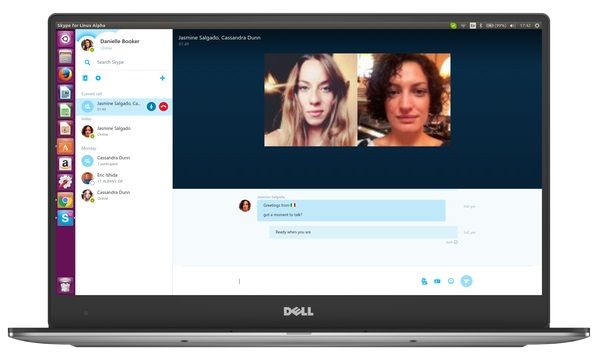 The new app has been built using the same technologies that created Skype for Web. It is essentially a native Linux version of the web app, allowing Microsoft to easily release timely updates in the future. Since Skype for Web is in active development, Linux users may not be left behind this time around.
However, since the app is web-based, it is likely to never receive some advanced native features baked into the Windows client. Linux users will be able to have a supported app at the expense of some capabilities requiring low-level hardware access.
Microsoft is using cutting-edge web technologies to build Skype for Web. Today, it announced it is extending one-to-one and group voice calls online to Google Chromebook devices and the Chrome web browser on Linux PCs, giving you more ways to communicate using Skype. Microsoft said this is an “initial step” towards enabling plugin-free voice calling on every browser, including the Linux desktop. It is already available using Microsoft Edge.
For Linux users who communicate with Skype, today is a long awaited day. The new app can be downloaded from the Skype website. It will receive updates throughout the alpha and beta periods as Microsoft adds features and improves stability. The app can currently be used for messaging and voice calling. Video calling will come in a later release.