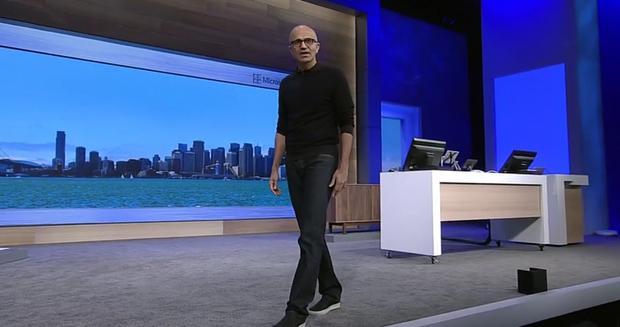 Satya Nadella on stage at Microsoft BUILD 2015
James Walker
After speaking with the creator of music notation app StaffPad about his experiences writing apps for Windows, the presentation swiftly moved to Microsoft’s fastest growing and highly profitable cloud computing solution: Azure.
Azure – 1.4 million SQL databases and counting
Scott Guthrie, Executive VP of Microsoft Cloud & Enterprise, took to the stage to reveal some impressive numbers. Azure is now seeing over 90,000 new subscriptions a month and handles over 1.4 million SQL databases containing over 50 trillion storage options.
Azure powers services including Office 365 and is designed to be a complete hosting solution for database-driven web apps and dynamic websites. It rivals similar offerings from companies including Amazon and has been performing very well in the sector, helped by numerous major updates in the past year.
Office – “Create, communicate, collaborate”
A lengthy and detailed demonstration of several advanced new Azure features followed before centre-stage was given to Microsoft’s world-revered productivity suite: Office. Office is going to evolve into a dynamic platform beyond the familiar name apps that we all know. 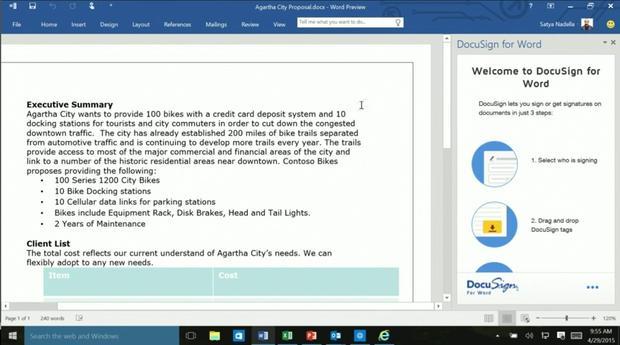 Apps for Office will look the same regardless of platform
James Walker
Developers will be able to write their own apps to run on top of Office programs and these will work everywhere that Office does. Demonstrations were shown of the same third-party app running in the new Excel app for Windows 10, Excel on the iPad and Excel Online in a web browser. 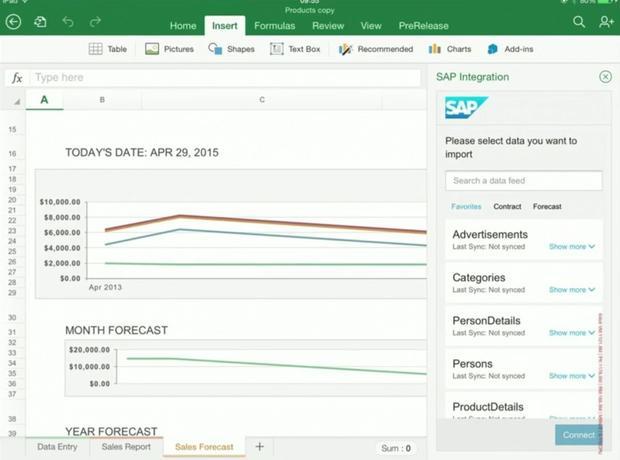 Apps for Office will look the same regardless of platform
James Walker
Microsoft announced that Office now has three fundamental areas, “User”, “Data” and “Intelligence” which work around three core values: “Create, communicate, collaborate”. The areas refer to creating the best user experience, providing the best data and letting Office intelligently decide what you need to see, something currently implemented in the Delve app for Office 365.
Windows – Ambition
After Office, Nadella reappeared to introduce what many had been eagerly waiting for: news of Windows 10. Windows lead Terry Myerson took over to show the audience more of what the future of the world’s most popular desktop operating system will be like.
Microsoft was quick to reveal that it wants 1 billion devices to be running Windows 10 in the next 2-3 years. Covering sectors ranging from phones to the 84-inch wall-mounted interactive Surface Hub whiteboard, the company is clearly optimistic that Windows 10 will be a success.
Nadella categorically stated that Windows “is a service” and a “unified platform”, calling it the “only platform” where you can have all of your devices efficiently and suggesting that Windows will be superior to Android and iOS, because it will be able to power all of your devices.
A claim sure to annoy many, Nadella promised that Windows 10 “will never junk up your system”, heralding it as “the most attractive development platform ever” with the “most innovation applications” too.
Windows – Store
Next up was a long-awaited explanation of the future of Windows apps. The Windows Store will be getting a makeover for Windows 10, bringing all product categories including apps, games, music and videos together into one unified experience.
It will also now support handling traditional Win32 applications that run on the Windows desktop. You will be able to find, download, install and uninstall programs like Adobe Photoshop directly from the Windows Store, helping with the new unified feel. 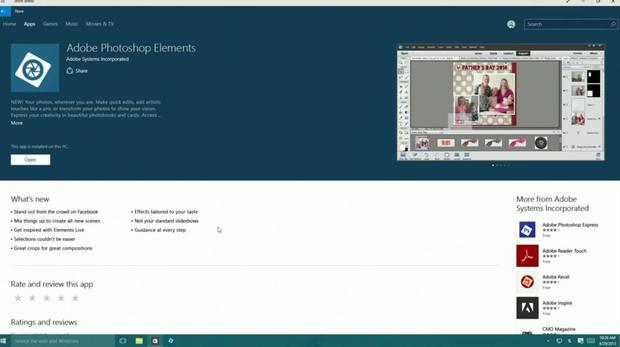 Photoshop in the Windows Store
James Walker
The store is also becoming more accepting to enterprises and schools. A new “business” mode allows administrators to automatically install apps on computers and highlight suggested apps for users. In a school scenario, students may be shown study planners or timetable managers while a business might suggest a note-taking or task planning app. Either way, it will be suggested on the front page of the store.
Apps will be promoted more vigorously too so that developers can expect more people to find their product. The Start menu will suggest apps to users while the refreshed Store interface makes things more discoverable. A plus for those in developing markets where credit cards are less common, the Windows Store will now support carrier billing on all devices, including tablets.
Windows – Android & iOS
Developers have several new ways to create apps for the new store. Rumours have been heard for months of the ability for Windows 10 to run Android apps and Myerson quickly confirmed this, stating that Windows 10 will include a “subset of Android” capable of running recompiled Android apps written in Java and C++. 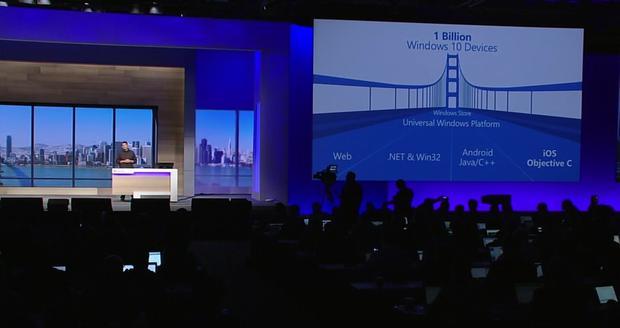 Windows 10 will run iOS and Android apps
James Walker
The apps won’t just be a simple port though. Once compiled to Windows, developers will be able to make full usage of the Windows APIs to use Cortana, display notifications and make the most of the hardware of the Windows device.
Of more surprise was the announcement that Windows 10 will also be able to do the same for iOS apps written in Objective-C. Visual Studio will be expanded with new tools for this purpose. Myerson noted with a pleased expression that such a port has already been completed and published, unknown to consumers. It turns out that the official Candy Crush Saga game, published to the Windows Phone Store a few months ago, is actually largely iOS code.
Windows – Spotlight & Cortana
With the app situation explained, Joe Belfiore arrived on stage to demonstrate some new interface features being added to Windows 10. The lockscreen has been refined in the most recent builds and now includes an optional “Spotlight” feature.
This aims to make Windows components and apps in the Store more discoverable by putting them right on your lockscreen. Using machine learning, the system can automatically change your background image to fit what is being promoted and provides content “hotspots” where you can learn more. These are reminiscent of those used on the Bing homepage and provide details on the app, how to use it and a Store download link. 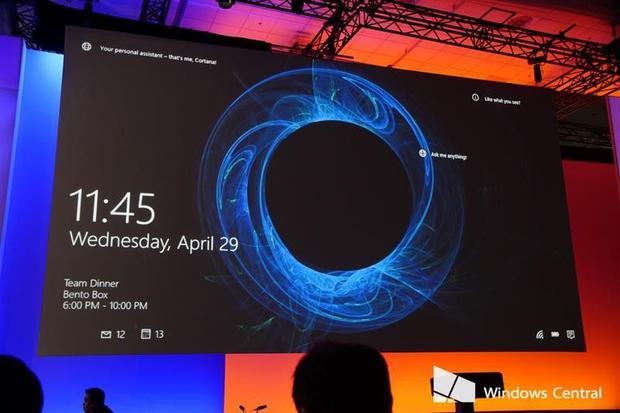 Windows Spotlight
Windows Central
This feature may sound dubious at first and it can be disabled. Belfiore gave an interesting example of how Spotlight works though, creating a situation where Windows had been installed on a machine for six weeks but the user had not yet tried out Cortana.
The system pulled in an abstract image of the Cortana logo to use on the lockscreen before overlaying it with information on Cortana and where to find its functionality. Spotlight was also seen promoting the popular app Fresh Paint to a user who it had realised was artistic from the other installed apps. 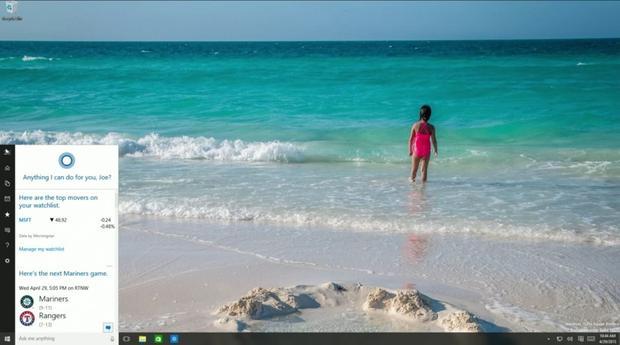 Cortana has a new interface in the latest Windows 10 build
James Walker
Advertisement. Scroll to continue reading.
Speaking of Cortana, Microsoft’s digital assistant has seen some attention. Expanded with new functionality, she now recognises commands like “Message Terry Myerson in Viber”, understanding that the Viber app should be used for communication. The interface has also been refined and now looks sleeker and more sophisticated. Cortana’s controls are integrated into a vertical menu extending from the Start button for a more complete effect.
Windows – Continuum on tablets and phones
The Start menu’s Continuum feature for tablets and phones has been expanded and improved. The familiar tiled interface is now scaled more accurately for tablets and the taskbar behaves in a more appropriate manner, making itself larger and hiding pinned icons by default to eliminate clutter. When an app is closed, users now return to the Start menu instead of the desktop when in tablet mode for a more logical experience.
An unanticipated announcement, Belfiore revealed that Continuum will also be available on Windows 10 for phones. Exploiting the potential of universal apps to the full, connecting an external display (via HDMI or Miracast) and a Bluetooth keyboard or mouse to a Windows 10 phone will cause the Start screen to expand onto the external display, looking just like Continnum for tablets. 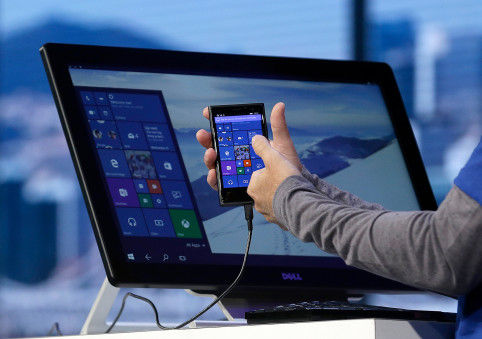 Continuum for phones
James Walker
Universal apps running on the phone will intelligently resize themselves to their desktop sizes. After all, they are the same code as desktop apps so this behaviour is a logical step. By buying a Windows 10 phone, you will be getting an ultra-portable computer that can be connected to any monitor and used with a mouse and keyboard. It’s worth noting that Belfiore clarified afterwards that you will need to buy a new Windows 10 phone as the functionality relies on new hardware that is not present in current Lumias.
Windows – Start & Interface
The Start menu has been refined a little too. Live Tiles now have a 3D-effect that looks like a cube turning. They revolve at slow speeds instead of quickly flipping in Windows 8 for a more calming influence. This is especially noticeable when combined with the new sound effects in the build which also have a soothing tone, eliminating the annoying pings and bleeps of the traditional Windows sounds.
An interesting development, Microsoft has decided to bring back some aspects of the translucent “Aero Glass” effect of Windows 7. The new feature can be seen on the taskbar and Start menu and is currently being trialled by the company based on user feedback.
There are currently two new variants that are being randomly distributed to Windows 10 users: “Flat” which is effectively transparent glass and “Blur”, an effect more reminiscent of the much-loved (and sometimes loathed) Aero Glass of old.
Additional interface changes include a few new icons – including the Wi-Fi connectivity one in the system tray – and more enhancements to multitasking features including Task View, Snap and Alt+Tab. With time marching relentlessly towards the summer when Microsoft is scheduled to launch Windows 10, the individual pieces of the interface are finally beginning to join together into a modern and sophisticated operating system.
The best of the rest
In this article, I’ve taken you through the vast majority of what Microsoft announced and unveiled at the Build 2015 Keynote 1 last night. There was more though, including news on Microsoft’s Project Spartan web browser. Now known officially as Microsoft Edge, I have a separate article on Internet Explorer’s long-overdue replacement available here. 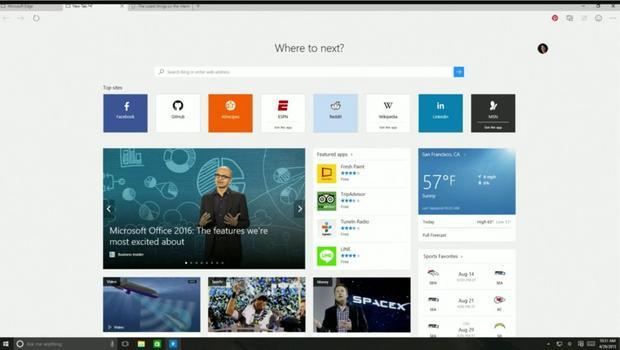 The Microsoft Edge web browser, formerly Project Spartan, at Microsoft Build 2015
James Walker
Microsoft also spoke at length on its new HoloLens holographic technology, giving live demonstrations on stage and exploring potential usages of the technology. HoloLens was seen running Windows 10 apps for the first time, including a video app that could be pinned to the walls of your home. 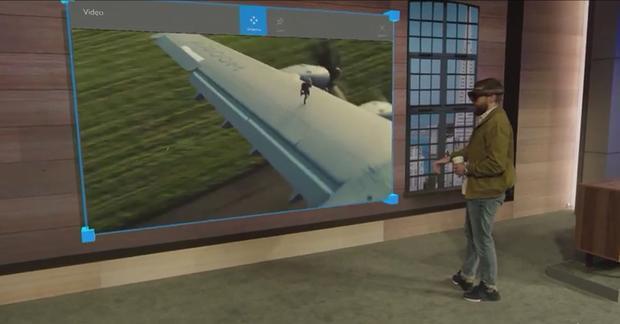 Microsoft HoloLens demonstration at Build 2015
James Walker
If you are interested in seeing the full details of any announcement mentioned here, you can check out the full Build keynote on Microsoft’s Channel 9 development forum. Alternatively, you may want to watch the company’s condensed video of the proceedings that shows all of the important and interesting things in just 3 minutes.
Microsoft managed to impress, show off, announce and surprise yesterday as its most visible and most-known teams presented together on stage to convince sceptical app developers that Windows is the place for them. With Windows 10 just a matter of months away, we now have a much better understanding of how much of the operating system is going to run. Let us know your thoughts on the new Windows and new Microsoft in the comments below.
In this article:Announcement, azure, Build, Computer, cortana, Developers, Devices, Edge, hololens, Keynote, microsoft, office, phone, project spartan, Satya Nadella, smartphone, Speech, Tablet, windows, windows 10