Thousands of people have descended on Miami for a massive two-day bitcoin conference that opened Friday — a sign that the US city, in the midst of a tech boom, is hoping to become the next cryptocurrency hub.

“I don’t think there’s anything more important in my lifetime to work on” than bitcoin, given the flexibility it offers, billionaire entrepreneur Jack Dorsey, the co-founder of Twitter and payments firm Square, told a crowded auditorium.

“We don’t need the financial institutions that we have today. We have one that is thriving, that is sound, that is owned by the community, that is driven by the community,” said Dorsey, one of the keynote speakers at Bitcoin 2021. 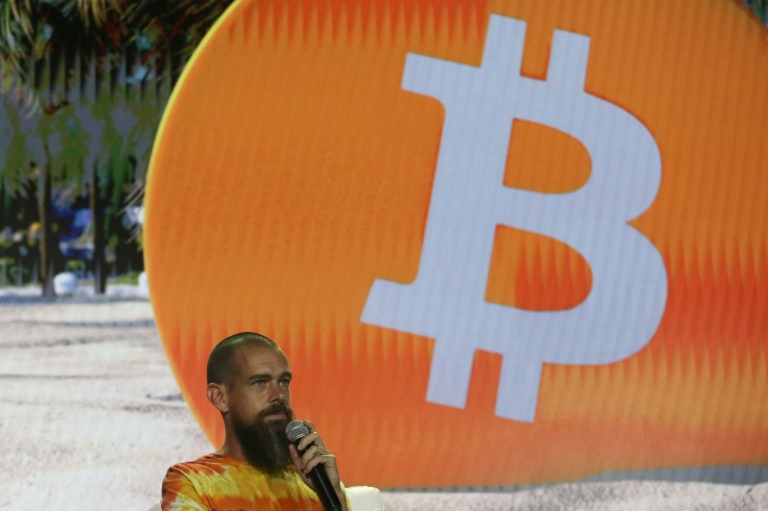 Jack Dorsey, CEO of Twitter and co-founder and CEO of Square, was one of the keynote speakers at Bitcoin 2021, a massive trade show in Miami, which hopes to be the next cryptocurrency hub – Copyright AFP Mike FIALA, Robyn BECK, Richard A. Brooks, Mike CLARKE, Dale DE LA REY, Anthony WALLACE, Philip FONG, Isaac LAWRENCE, Peter PARKS

The conference was originally scheduled to take place in Los Angeles, but was moved due to tougher coronavirus restrictions in California.

The line to get into the Mana Convention Center in Miami’s trendy Wynwood neighborhood wrapped around the building. Everyone was in high spirits and there were no face masks to be seen.

Beyond Dorsey, two of the other speakers were Cameron and Tyler Winklevoss, twin Harvard classmates of Mark Zuckerberg who sued him over claims he stole the idea for Facebook from them, and now run cryptocurrency exchange Gemini.

“We think bitcoin is gold 2.0,” Tyler said at a panel discussion. “When we get to Mars, what is the currency going to be in Mars? Dollars? No. Bitcoin.”

So where does Miami fit into the picture?

For David Abner, Gemini’s global head of business development, Miami is “centrally located, especially in the Americas, and there’s a lot of political support here.”

“I think they’ve spent time to understand it and think about the ramifications of bitcoin. And so they’re very supportive of the economy,” Abner told AFP, adding that cryptocurrency could revolutionize remittances sent back to Latin America.

Miami Mayor Francis Suarez, who opened Bitcoin 2021, has become a bit of a celebrity in tech circles, for his intense efforts to turn the Magic City into a beachfront Silicon Valley.

In February, the Republican mayor announced that the city would explore ways to do some of its financial transactions using cryptocurrency, including paying salaries to employees.

Earlier this week, venture capital firm Borderless Capital announced it was moving its headquarters from Atlanta to Miami and launching a new $25 million fund for local startups using blockchain technology.

And the mayor announced the launch of MiamiCoin, a Miami-specific cryptocurrency that will allow investors to boost the city’s coffers while making money themselves.

“This is not a moment. This is a movement,” Suarez said Friday.

Since late last year, Miami has been attracting techies away from Silicon Valley and New York for a variety of reasons — thanks to Florida’s lack of state taxes and relatively lax coronavirus precautions, along with the city’s multicultural work force and proximity to Latin America.

It’s not exactly clear how many have moved, but there are signs of growth  — home prices are soaring, up nearly 35 percent in just a year, according to the Miami Association of Realtors.

But not everyone is happy. The Miami Herald warned in an editorial of the possible pitfalls of the city’s embrace of all things crypto.

“Don’t get us wrong. We hope cryptocurrency — and the flashing neon welcome mat we’ve set out for the tech industry — elevate this city to new prosperity,” the paper said.

“Just don’t blame us for being a bit wary,” it said. “Because Miami has history, folks. We’ve been a smugglers’ paradise, the epicenter of the cocaine trade, a mecca for money laundering, ground zero for mortgage fraud…”

“We worry about going through another boom-and-bust cycle or a wave that crashes and takes us all down with it. If we’re staking the city’s future on this, please, let’s not repeat the past.”