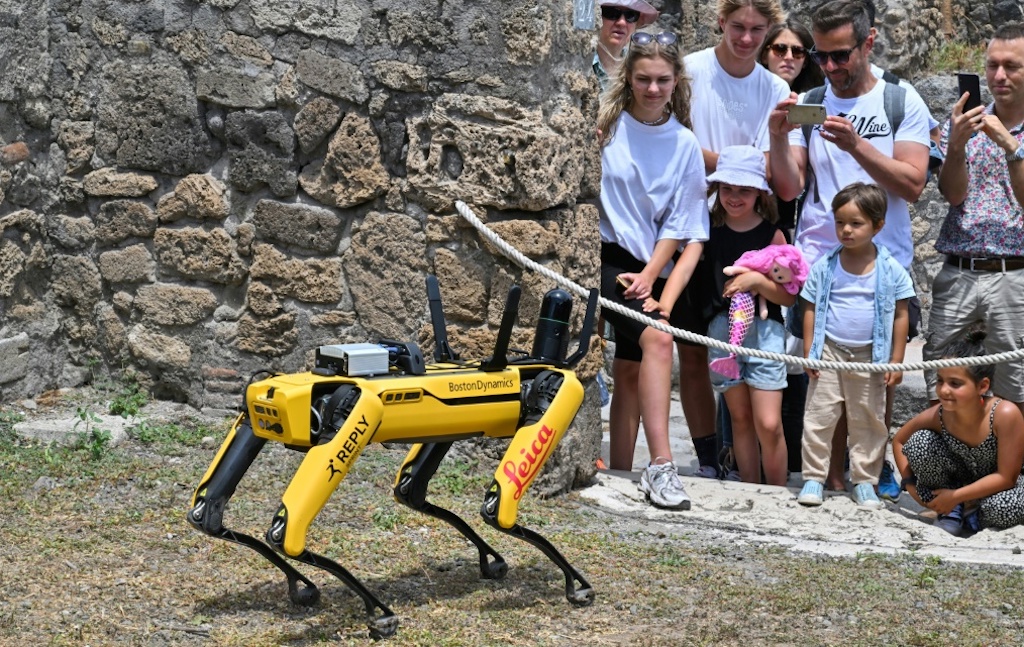 Under the amused gaze of many tourists, a robot dog wanders the ancient stone alleys of Pompeii’s famous archaeological park.

Meet Spot, a friendly, yellow-and-black remote-controlled creature with a gangly gait who looks like a dog crossed with an insect — all wrapped up in a robot’s body.

Spot’s current mission at Pompeii is to inspect hard-to-access areas of the sprawling ruins, to collect data and alert his handlers to safety and structural problems.

His purvey includes surveying tunnels dug out in clandestine excavations, which Zuchtriegel said “unfortunately still take place in the area”.

With its excavated ruins spread out over 44 hectares (109 acres), the archaeological site preserves the remains of the ancient wealthy city south of Naples, buried by ash after the eruption of nearby Mount Vesuvius in 79 AD.

Spot — who weighs 70 kilograms (154 pounds) and is about the size of a Golden Retriever — is controlled remotely with a tablet and better equipped than people to survey certain areas of the park.

The robot is made by US company Boston Dynamics, which specialises in robotics, including for the military. The company’s website says Spot can be used in industries such as construction, mining and manufacturing, among others, carrying out inspections and capturing data.

Controlling Spot this week in Pompeii was Valerio Brunelli, business developer for Leica Geosystem, which makes a 3D flying scanner, resembling a drone, that accompanies the robot in its rounds.

Brunelli made Spot bow and wiggle for the crowd.

“Spot is an amalgamation of technology that makes it a robot capable of exploring very complicated places, such as those found here,” said Brunelli.

“It’s a leap into the future for a thousand-year-old park”.

Director Zuchtriegel said a decision on whether or not to buy Spot had not yet been made, but that rapid changes in the technology sector made choosing expensive, high-tech purchases difficult.

“People are always needed, so there will never be a robot dog to be the guardian inside the Pompeii site. That is not the goal.”