This story is so old it’s hardly news. The functionality has been rumoured for years and it was always inevitable seeing as Windows tablets are currently the only feasible offering for people who need to be running more than one app at the same time.
TechCrunch reports how Apple’s SVP of software engineering, Craig Federighi, finally unveiled the feature during the company’s WWDC keynote today. With iOS 9, you will be able to simply swipe an app to the side to make it take up half the screen and then swipe another app into view to take up the remaining space. Alternatively, you can split the apps 70/30 instead of 50/50 on the screen.
The process is as effortless as it is on Windows. The OS will also be able to arrange windows automatically, opening an incoming email on half of the screen whilst watching a video, for example. 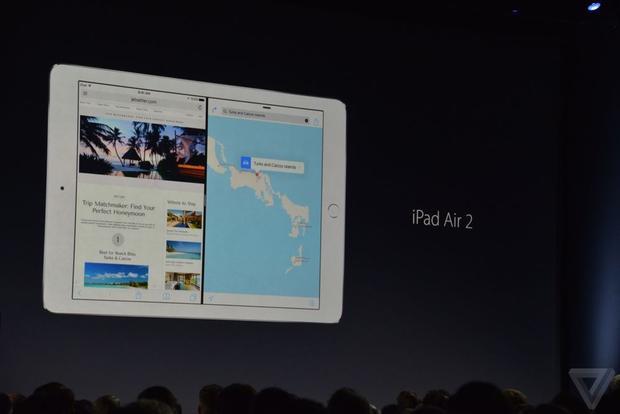 Additionally, an innovative picture-in-picture mode — alike to that available in the YouTube app on iOS and Android — will let users keep apps on top of other full-screen ones and drag them around the screen. Picture-in-picture apps will also be resizable.
The split-screen mode is called Split View while picture-in-picture is Slide Over. Split View will only be available on the iPad Air 2 while Slide Over will require an iPad Air, Air 2, Mini 2 or Mini 3. Older iPads will be left out despite being eligible — in some cases — for the core iOS 9 update.
The new multitasking modes will be instrumental in Apple’s plans to regain business customers from Microsoft. The Windows-powered 12-inch Surface Pro 3 has enjoyed very healthy sales due to its established multitasking but Apple now has a product to rival it. 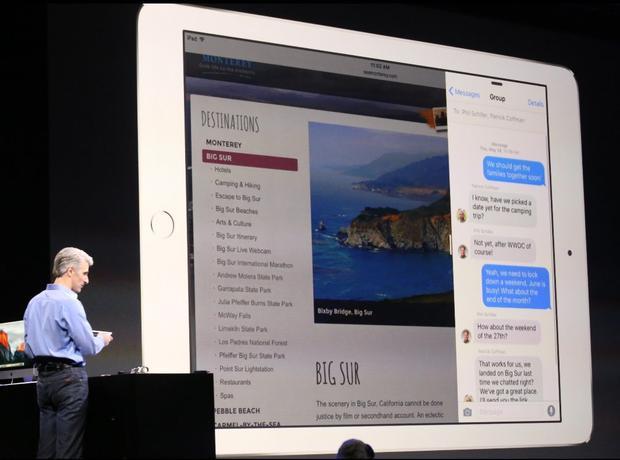 It should be noted that Windows still has the edge though, allowing up to four apps — depending on screen size — to be “snapped” at one time compared with Apple’s two, and in a much more flexible array of ratios than Apple’s rigid 50/50 or 70/30. Additionally, the Surface Pro has the advantage of including a dedicated stylus for note-taking out of the box. Rumours have suggested that Apple is working on an “iPad Pro” to directly rival the Surface Pro but there is still no indication of when this will be launched.
The Verge reports that iOS 9 also has some more minor productivity improvements. The new task switcher is more flexible and makes it easier to enable the new split-screen mode, utilising another Windows-inspired interface, while the on-screen keyboard now has copy, cut and paste commands built-in.
iOS 9 will be launching later this summer on all devices currently running iOS 8, although some restrictions on specific features will apply. Apple’s WWDC keynote is still continuing and we can expect to see much more of the company’s software plans for the next year over the course of the next few hours.