The 2008 Consumer Electronics Show is the seminal event for giving pro nerds their new technology. This week in Las Vegas, CES will focus on themes such as green tech, touch screens, next-gen DVDs, futuristic TVs and souped-up cellphones.

From touch screens to powerful cellphones, new products will elevate CES to a maturity level that is still exciting gadget hounds hungry to learn how their digital experiences will improve in the future.

On Sunday night, Microsoft chairman Bill Gates spoke at his last keynote at CES before stepping down as a full-time Microsoft employee. He praised what Microsoft has accomplished in the past year — 100 million people using Windows Vista, 20 million using Windows Mobile — and also hinted at what’s in the pipeline: NBC and MSN will team up to put 3,000 hours of video from the 2008 Olympics live and on-demand on the Web. And Gates had some fun at his final keynote, playing a video featuring cameos of Jon Stewart and Bono. He also rocked out on Guitar Hero III along with Slash, former guitarist for Guns n’ Roses.

But CES is more than just celebrity spotting and CEO send-offs. Find out what CES will be debuting in our comprehensive preview. 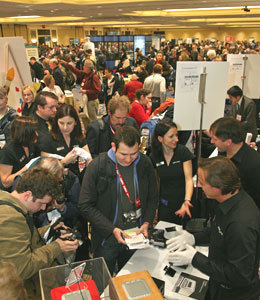 The crowd mingles through booths at the 2008 Consumer Electronics Show

When Warner Bros. recently announced its exclusive partnership with Blu-ray DVDs, there was bound to be a reaction by friends and foes at CES. The tech showcase didn’t disappoint — Sony CEO Howard Stringer congratulated Warner for joining his company’s next-gen DVD camp, while Toshiba cautioned against over-hyping HD DVD’s demise. Jodi Sally, vice president of marketing for digital audio and video at Toshiba America Consumer Products, said recently, “It’s difficult for me to read the comments of the pundits that HD is dead. We’ve been declared dead before.”

Sony took advantage of Warner’s good news by releasing at CES a $200 Blu-ray disk drive for PCs. They also introduced a line of notebook PCs with built-in Blu-ray players. And how did Blu-ray’s competitor respond? The HD DVD Promotion Group cancelled a press conference it had set up for CES, basing the cancellation on Warner’s announcement. It looks like the next-gen DVD war is still raging, although this year’s CES is giving Blu-ray much-needed support, and HD DVD is left limping off the battlefield. 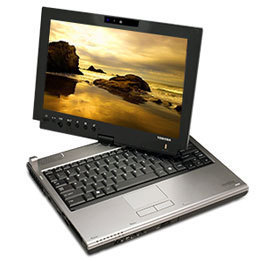 Blame iPhone for putting the trend into the public eye, but touch screens will be available on more than just cellphones at CES this week. Logitech unveiled its Harmony One Universal Remote, complete with touch screen to access TV, DVD or music. Sony showed off its Mylo 2, a “personal communicator” (read: BlackBerry competitor) that sports a QWERTY keypad, a 1.3 megapixel camera and a touch screen. And Pioneer introduced an auto-friendly navigation system featuring a touch panel and voice control.

Also gaining buzz at CES are tablet PCs, a format once dubbed as dead as pagers. But in light of Dell and Toshiba releasing their versions of tablet PCs, the trend is expected to rise. Samsung, HP and Fujistu are also joining the tablet PC party, so expect this market segment to see an upswing in the coming months.

LCD and plasma are still featured prominently at this year’s CES, but a few trailblazers are gaining attention, too. Samsung not only unveiled a 52-inch ultra-slim LCD TV, but also gave attendees a glimpse into organic LED (OLED) technology with its 14.1- and 31-inch models. OLED is being touted as the next progression in TV technology, and it’s already being sold in Japan.

Other boob-tube developments should excite geekified home theatre fans: Sharp debuted AQUOS Net, which allows you to plug a TV into an Internet source to get updated weather and stock info displayed onscreen; Sling Media announced pricing ($249) for its much-anticipated SlingCatcher device, which lets you play PC-based video on your TV; and Mitsubishi tittered audiences with its “laser television” that uses lasers to produce more vivid and crisper images than today’s technology. 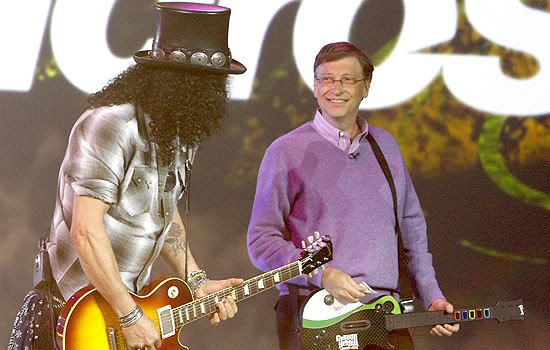 It’s not enough to have a fancy-looking cell; it has to have brains and brawn. CES is showcasing several strong players in the smartphone market, including the video-friendly Motorola Z10. It can play clips at 30 frames per second (the same as your TV set) and users can easily upload clips to YouTube on the handset.

Not to be outdone is Sony Ericsson’s W760, a smartphone sporting built-in GPS and a motion sensor, the latter allowing you to skip music tracks if you shake the handset, for instance. Plus, it has a rare combo of tri-band HSDPA and quadband EDGE, meaning it will work on high-speed cellular networks in the U.S. and abroad. And Yahoo is pushing further into the Web mobile department with an application called Go 3.0, giving access to a number of tools like Flickr and Yahoo Mail. It’s obvious many major Web companies see enormous potential in bringing content to a device as ubiquitous as a cellphone. And CES is the best time to get noticed. 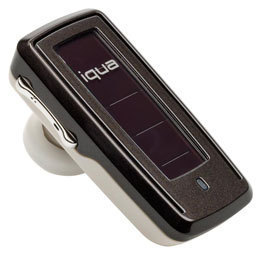 Companies realize how going green can improve their public image at large. At CES, one of the biggest themes is environmentally-friendly technology, such as Fujitsu’s 15.4-inch laptop whose plastic chassis is made from biodegradable corn oil instead of petroleum oil.

Also giving green tech a push in the right direction is Green Plug, a San Ramon, Calif., company that displayed a unique chip that lets a device know when to stop using power (like a laptop that is plugged in but turned off). They also gave a sneak peek into their universal chargers that let people buy just one charger to charge multiple devices rather than use a product tailored for just one.

Solar tech is figuring prominently at CES, particularly the 603 Sun from Iqua — picture a solar-powered Bluetooth headset that can offer up to 12 hours of continuous talk time as long as it’s exposed to ambient light. Also, the NRG Dock allows users to charge iPods and cellphones using a solar panel placed in an apartment window, never drawing power from the grid. It’s that kind of innovation that will elevate CES past the usual self-congratulatory press conferences dotting the four days. Emerging technologies that can help the planet, along with high-tech engineering, have the potential to make CES an event for more just nerds who slobber over specs.

In this article:CES, Green technology, OLED