SamMobile reports that the images were posted online this week after the phone passed through the Chinese TENAA certification process. They are said to show a handset currently named the Samsung SM-W2016. It resembles a clamshell version of the company’s Galaxy S6 flagship device, sporting two 3.9-inch Super AMOLED 1280×768 displays and an old-school T9 numeric keypad.
The processor is Samsung’s own Exynos 7420. There is 3GB of RAM and 64GB of internal storage. The main camera shoots 16-megapixel photos, a resolution roughly eight times as large as a typical flip phone would have been capable of when they were still fashionable.
Clearly, the device won’t appeal to everyone in an age of large-screen glass-fronted handsets but it is sure to satisfy people who have always loved the clamshell form-factor and want to see what it’s like using Android in this way. The SM-W2016 uses Android 5.1.1 Lollipop but the images do not show the device with the displays turned on. 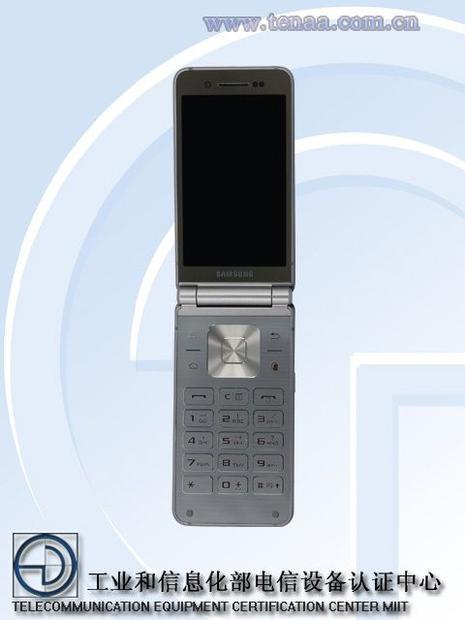 Typing with an alphanumeric keyboard while using an Android phone is likely to be an interesting experience. Part of the success of touchscreen smartphones has always been their ability to present the user with full QWERTY keyboard layouts in both portrait and landscape orientation. On a clamshell device, that ease of use would be removed — even if the touch keyboard is left enabled, the user would still have to reach over the keypad to type on the display.
Availability for this upcoming Samsung device is currently unknown but it seems unlikely it will be making an appearance in the United States or Europe. It’s more likely to appeal to buyers in Asia and developing markets where flip phones are still relatively popular.
Samsung is currently selling the Galaxy Folder for $250 in Korea. That clamshell device is less powerful than the new model revealed this week, featuring a 3.8-inch 480×800 screen, 8-megapixel camera and 2GB of RAM.