Soli will also be used for facial recognition that will supposedly be more efficient and seamless at unlocking the Pixel 4 than Apple’s Face ID on the iPhone XS.

Google revealed a few new features to expect in its upcoming Pixel 4 smartphone in a blog post.

With its latest revelation, the company is focusing on “ambient computing.” That’s to say, it’s developing motion controls for the Pixel 4, and it’s all going to be powered by Google’s “Soli” motion sensing radar, which it’s been working on for the last five years.

One of the new features that Google’s Soli will bring in the Pixel 4 is gesture control, which Google is calling Motion Sense.

Motion Sense will ” allow you to skip songs, snooze alarms, and silence phone calls, just by waving your hand,” the company said in its blog post.

Unlike Apple’s Face ID, facial recognition on the Pixel 4 won’t require you to place the phone directly in front of your face and swipe up to begin the facial recognition process. Instead, Google says that Soli on the Pixel 4 “proactively turns on the face unlock sensors, recognizing that you may want to unlock your phone. If the face unlock sensors and algorithms recognize you, the phone will open as you pick it up, all in one motion.”

“Face unlock works in almost any orientation—even if you’re holding it upside down,” Google added, addressing some of the restrictions with Apple’s Face ID.

Regarding the privacy aspect of using your face to unlock the Pixel 4, Google says “the images used for face unlock are never saved or shared with other Google services,” and that image data never leaves the phone.

In Google’s blog post, the company included an image that’s likely to represent the Pixel 4, and could confirm a rumor that the phone will have a large top bezel above the display. That’s where Google’s Soli radar technology is likely to reside. 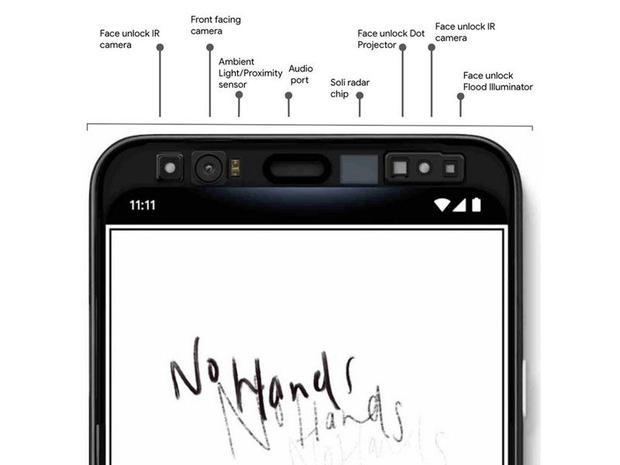 Google is expected to announce and release the Pixel 4 in October, the same month the company has historically announced and released previous Pixel smartphones.