The remains comprise in part the stapes — a bone of the middle ear found in humans and other mammals — of a Neanderthal child estimated to be no more than 2 years old at death.

The study centred on remains recovered from an archaeological site at La Ferrassie near Savignac-de-Miremont, in the Dordogne department in south-central France between 1970 and 1973. Re-examining them has enabled researchers to reconstruct the stapes or auditory ossicle, the smallest bone in the bodies of humans.

La Ferrassie is renowned as a Neanderthal enclave being a site where, over the past 120 years or so, seven Neanderthal skeletons, ranging in age from foetuses to almost complete adult skeletons were found.

Among remains originally discovered at La Ferrassie in the early 1970’s was the skeleton of a 2-year-old Neanderthal child. The child was named La Ferrassie 8 and four decades on is providing clues as to how the anatomy of the extinct Neanderthals differed from humans.

Revisiting the fruits of the 1970’s excavations revealed 47 fossils associated with the infant Neanderthal, La Ferrassie 8 enabling researchers to further complete the child’s skeleton. Among the bones recovered were the remains of a skull, jaw, vertebrae, ribs and hand phalanges.

A significant find was a near-intact portion of a left temporal bone complete with an auditory ossicle — an intact stapes — discovered inside it. Using virtual 3D construction techniques, researchers were able to “release” the ossicle, imprisoned within the left temporal bone, without damaging either component. This virtual extraction enabled the researchers to carry out further study of the Neanderthal stapes.

3-D reconstruction of the auditory ossicle of a two-year-old Neanderthal.
University of the basque Country
Advertisement. Scroll to continue reading.

This stapes is the most complete one found among Neanderthal remains, Examination of the ossicle confirmed there to be morphological differences between our species and the Neanderthals even in the tiny ossicle, this smallest and lightest of bones in the body. 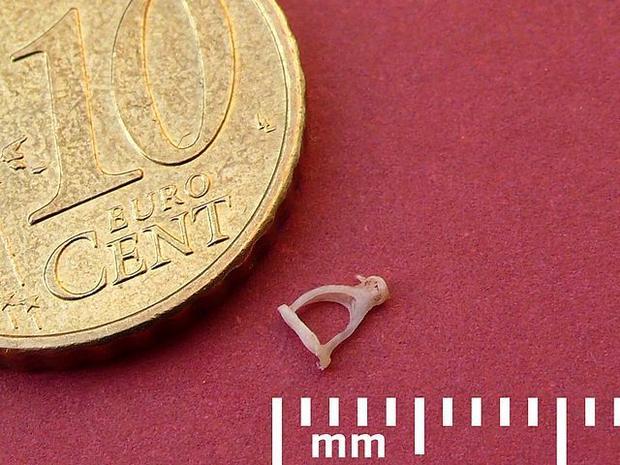 The stapes or stirrup bone is the smallest bone in the human body as this photo comparing a stapes with a 10 eurocent coin demonstrates.
Welleschik via Wikimedia Commons

There’s often been speculation that Homo sapiens sapiens’ ability to communicate through language set them apart from Neanderthals, giving modern-day humans a distinct advantage in the evolutionary stakes over their Neanderthal cousins. Language development depends on hearing but the study’s co-author Asier Gómez-Olivencia, a doctor in Human Palaeontology and now a research fellow in the Department of Stratigraphy and Paleontology of the University of the Basque Country in northern Spain, reserved his position on whether the find was significant in terms of Neanderthals’ development, commenting, “We do not yet know the relation between these morphological differences and hearing in the Neanderthals. This would constitute a new challenge for the future”.

But Gómez-Olivencia emphasized how crucial it was to review the remains from earlier excavations. That a discovery of such significance was made thanks to taking a further look at fossils unearthed almost half a century ago provided proof of “the importance and need to review old excavations. We’re in no doubt about that”.

The study of these new remains was recently published in the Journal of Human Evolution.