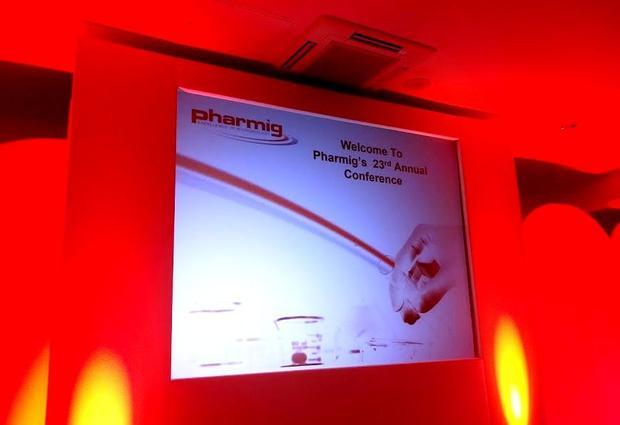 The venue for this year’s event was at the Nottingham Belfry, a few miles away from Nottingham’s gridlocked roads. The hotel has good conference facilities, although any type of tower containing a bell was conspicuous by its absence (“belfry” refers to the part of a bell tower or steeple in which bells are housed.) 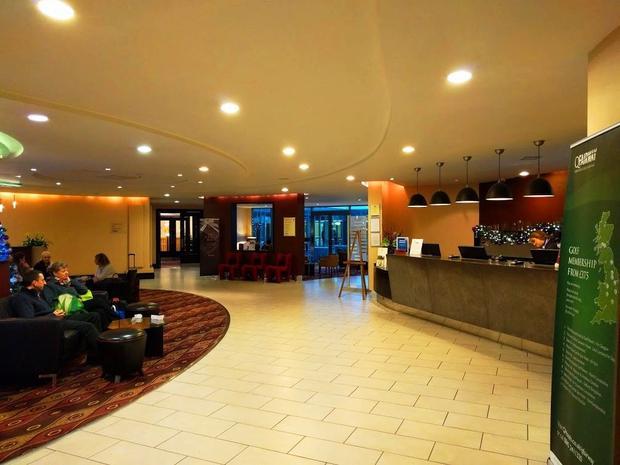 The lobby area of the Nottingham Belfry hotel, venue for the conference.
Tim Sandle

Just over 100 delegates attended the event, along with a near equal number of exhibitors and technical specialists, from suppliers of technical equipment to those who specialize in building cleanrooms (special environments with strict control of particulates, within which medicines are required to be produced.)

The conference took place over two days, interconnected by a gala dinner. At the dinner a longstanding member of the Pharmig committee, Kim Morwood (an expert in the testing of disinfectants) stood down after many years of service.

The keynote speaker was Andrew Hopkins, a medicines inspector with the MHRA (Medicines and Healthcare products Regulatory Agency), a body equivalent to the U.S. Food and Drug Administration (FDA) with respect to pharmaceuticals and medical devices. Mr. Hopkins dealt with the topic of data integrity focused around the question ‘just how reliable is the data collected by pharmaceutical companies?’ Readers of Digital Journal will be aware of several recent recalls initiated by the FDA where the reliability of the information collected by drug product manufactures has been called into question. Andrew Hopkins dealt with both computerised systems and other forms of data gathering, including paper. One of his main concerns was with pharmaceutical companies in situations where operators are not recording information contemporaneously. He cited one example where an operator, weighing out a key active ingredient for a medicine attempted to memorize 40 readings before taking a walk to the records room where the poor operator attempted to recall the readings. He also voiced concern with electronic data, where pdf files could be manipulated.

The second presentation on the first day was delivered by Phil Greaves, who is a consultant. Mr. Greaves looked at aging pharmaceutical facilities. The U.K. was once a leader in state-of-the-art pharmaceutical facilities. However, with the market-led drive for cheaper manufacturing, more and more pharmaceutical companies are investing in new production facilities in countries where labor costs are low. As a result, many of the manufacturing plants in the U.K. are aging and not receiving the level of investment they need. Phil Greaves suggested the annual rate of investment into a factory should be 4 percent of its value (so £4 million for a £100 million valued site) per year. Otherwise there is a risk of microbial contamination events occurring more regularly. An example given was cracks in the fabric of cleanroom walls, and such cracks could allow air from unclassified plant areas to ingress and this could bring with it fungal spores.

The third speaker was Rachel Blount, a contamination control expert with the healthcare company Ecolab. Rachel provided a review of best practices for cleaning and disinfecting cleanrooms, including an overview of regulatory requirements and the current European laws relating to the registration of biocides. The European requirements included consideration of the environmental impact and operator safety.

The third and fourth speakers dealt with contamination control within the areas where pharmaceutical products are manufactured. Olivier Chancel (a sterility expert at the company Merial) presented some case studies of when things can go wrong; and Paul Lopolito, who works for the company Steris, spoke about how to remove biofilms. A biofilm is a community of microorganisms that form onto an object and attracts other microorganisms by creating a “sticky” substance. Over time, microorganisms are shed which results in continuous contamination. This is a major concern for water systems.

The day closed with a presentation by Tim Eaton, who works for the pharmaceutical company AstraZeneca. Mr. Eaton spoke about different ways to assess contamination risk when sterile products are manufactured. The biggest risk, he said, was airborne. Here, microorganisms can be carried in air currents and, when the design of machines that dispense medicines is imperfect, these microorganisms can be swept into the product causing risks to patients. 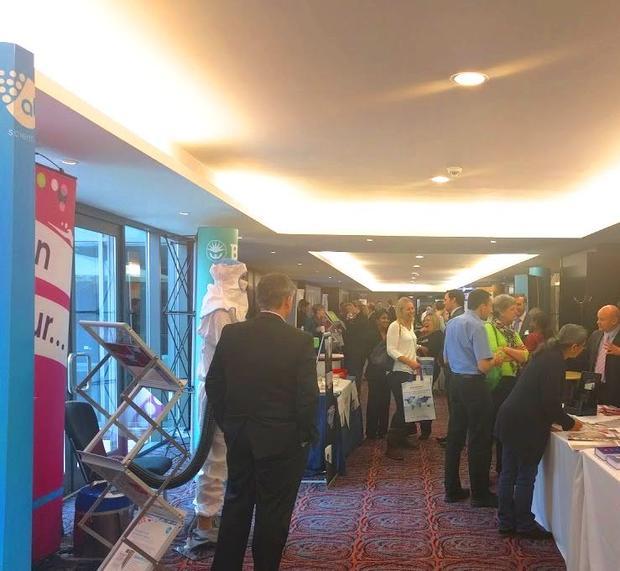 The conference included an exhibition, where new products could be viewed and technical matters discussed. The exhibitor of the year award went to Associates of Cape Cod, who specialize in screening for bacterial toxins. 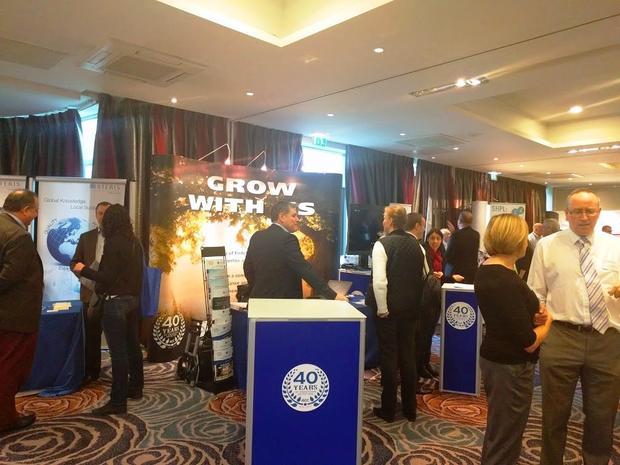 The Associates of Cape Cod exhibition stand, where the team were voted exhibitors of the year by the delegates.
Tim Sandle 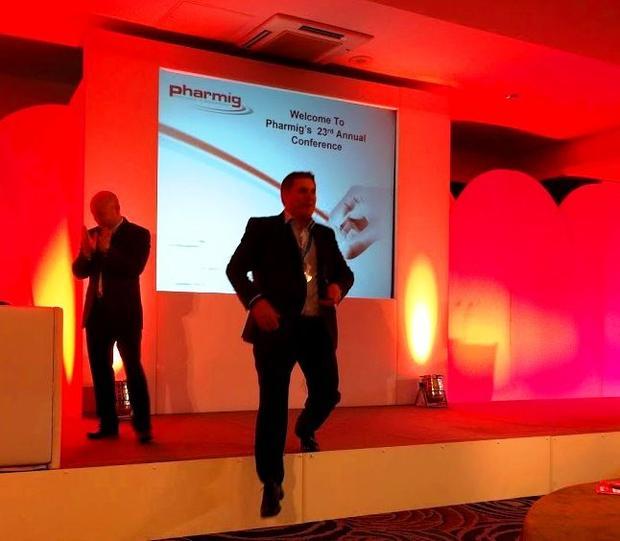 The managing director of Associates of Cape Cod leaves the stage after receiving the exhibitor of the year award from Pharmig’s chairperson, David Keen.
Tim Sandle

The second day began with a lecture by David Keen, the chair of Pharmig. This was designed to provide new microbiologists and emerging leaders with a toolkit. This included important things to look for and ways to take the sometimes obscure language of microbiologists are turn this into a form of words that production personnel and engineers would understand.

This was followed by a presentation from Tim Sandle, who spoke about risk assessment. While “quality risk management” is a buzz phrase in pharmaceuticals and healthcare, Dr. Sandle (representing Pharmig) was keen to put across how people should not become obsessed with numbers or with finding ways to present things as “low risk” without really considering the risks to patient harm. Examples were presented about performing microbiological monitoring in the right places; working out the points of weakness for an item of equipment; and streamlining monitoring programs to make them more efficient.

Due to the third speaker of the day being taken ill, Tim Sandle held an impromptu session on cleanroom clothing. While this, on the surface, may not seem like a subject of direct relevance to microbiologists, the clothing worn by operators is designed to retain contamination and if this is not controlled, environmental control can be compromised.

The fourth speaker was Hans Noordergraaf from Abbott Biologicals BV. In his presentation, Hans Noordergraaf presented some ‘horror stories’ relating to things that can go wrong in facilities making medicines. One example included a company that deliberately introduced bacteria into its sterile manufacturing area to test out its filtration processes. 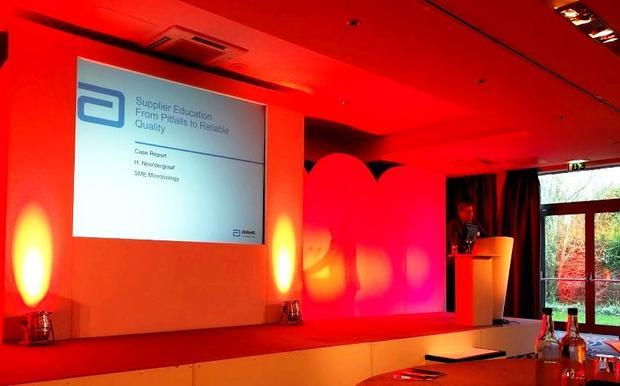 The final presentation was delivered, as with the opening of the conference, by Andrew Hopkins. The talk focused on the revision to the key part of European Good Manufacturing Practice (GMP) dealing with sterile products and how the forthcoming version would be expanded considerably. Mr. Hopkins also provided some cases studies to illustrate why regulatory oversight is needed. This included a facility in India where holes, dust and cracks were found on day one of an inspection within a critical cleanroom. Finding this to be a critical deficiency, the medicines inspector involved was shocked to find out that, overnight, the entire clean area had been repainted in an uncontrolled fashion using everyday paint.

Interspaced with the main presentations were a series of ‘open discussion’ sessions where delegates could bring their problems and seek advice from colleagues. These were organized around themes and moderated by industry experts.

The conference was a success in terms of getting the key messages across: use risk wisely; be proactive about aging facilities; and keep data accurate and secure.