The new research, which comes from Brigham and Women’s Hospital in the U.S., uses accurate measurements of sodium intake confirm relationship with human mortality. While it is well-established that consuming foods high in salt contributes to high blood pressure (and hence the risk of stroke) in a linear relationship, it has been less clear whether the same relationship extends to cardiovascular disease. The new research, which makes use of using multiple measurements, appears to confirms that a similar relationship exists. 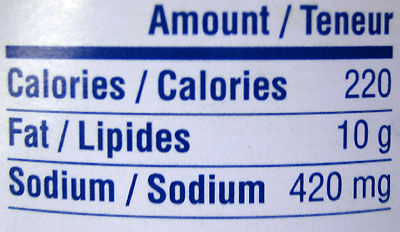 Take note of the high amount of sodium (salt) in this food product marketed for Toddlers.
Ken Wightman

To draw out an association between sodium intake and cardiovascular risk, the researchers the team assessed sodium intake in multiple ways. This consisted of using a statistical formula called the Kawasaki formula.The researchers also used other mathematical approaches that looked at the average of multiple, non-consecutive urine samples. Data was drawn from the results from a U.S. database called Trials of Hypertension Prevention, which included data relating to some 3,000 individuals, aged 30–54 years, and medically assessed as having pre-hypertension. The study is sponsored by the U.S. National Heart, Lung, and Blood Institute (NHLBI).

The methods showed a direct linear relationship between increased sodium intake and increased risk of death, implying that both low levels and high levels of sodium consumption were associated with increased mortality and hence cardiovascular risk.

One of the reasons why the link between heart disease and sodium has been contested is, according to lead researcher Nancy Cook, because “Sodium is hidden — you often don’t know how much of it you’re eating, which makes it hard to estimate how much a person has consumed from a dietary questionnaire.”

The study results are published in the International Journal of Epidemiology, with the paper called “Errors in estimating usual sodium intake by the Kawasaki formula alter its relationship with mortality: implications for public health.”

A new study shows that a caffeine concentration equivalent to four cups of coffee promotes the movement of a regulatory protein into mitochondria, enhancing their function and protecting cardiovascular cells from damage. The protective effect was reached at a concentration equivalent to consumption of four cups of coffee, suggesting the effect may be physiologically relevant, although more research is required.

See PLOS Biology: “CDKN1B/p27 is localized in mitochondria and improves respiration-dependent processes in the cardiovascular system—New mode of action for caffeine.”

Importance of the gut microbiome

In other dietary research, a new study demonstrates how our intestinal microbiome influences metabolism, via the immune system. This research, from Boston Children’s Hospital, indicates how the ‘good bacteria’ in our gut keep us metabolically fit. This is through responding to “good” bacteria and thus by fine-tuning body metabolism to diet and intestinal conditions. The research, conducted in fruit flies, is published in Cell Metabolism under the the title “The Drosophila Immune Deficiency Pathway Modulates Enteroendocrine Function and Host Metabolism.”

This article is part of Digital Journal’s regular Essential Science columns. Each week Tim Sandle explores a topical and important scientific issue. Last week we looked at a computer program that can look five minutes into the future. The artificial intelligence was developed at the University of Bonn, and it appears to be able to accurately predict future actions.

The week before we considered new research which has found that for those with coronary heart disease, physical activity is more important for weight loss in terms of life expectancy following diagnosis of the disease.