Alzheimer’s disease is a common pathology of the modern world, especially with ageing populations. This is generally regarded to be due to both hereditary components and as a result of numerous injuries to neuronal structures and components of the central nervous system. There may also be an environmental connection.

With the neurodegenerative disease, the majority medical opinion is that a protein called amyloid-beta forms sticky “plaques” in the brains of people with Alzheimer’s disease, ultimately killing the surrounding neurons and causing memory loss and other cognitive problems. The protein forms over many years, possibly beginning in childhood. The theory runs that an amyloid-related mechanism, designed to control neuronal connections in the brain in early life, is again triggered by the ageing-related processes in later life.

Chlamydia infection is a common sexually transmitted infection in humans caused by the bacterium Chlamydia trachomatis. Chlamydia is a major infectious cause of human genital and eye disease. C. trachomatis is a Gram-negative bacterium. It is ovoid in shape and non-motile. 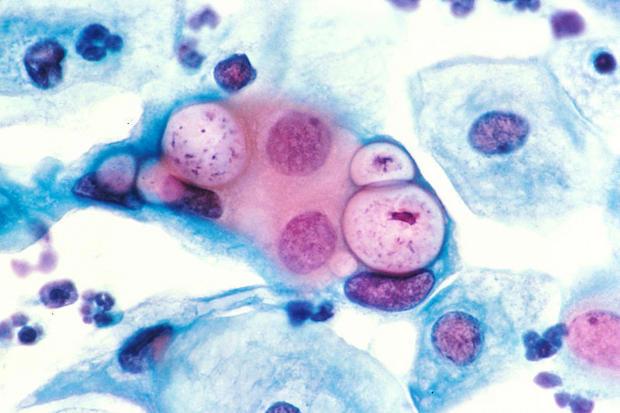 This is what chlamydia looks like under the microscope; its effects on young women can be devastating.
Creative Commons

The reason why there may be an association, the researchers suggest, is because viruses have been linked with certain cancers and some bacteria are associated with stomach ulcers; the connection between microorganisms and types of diseases is not uncommon. It follows that viruses or bacteria (or both) are responsible for the build-up of the plaque that ultimately leads to Alzheimer’s disease. The researchers are of the opinion that microbial infections trigger neuroinflammation and, in turn, this leads to plaque formation.

The reason for this assertion, the researchers contend, is because viruses and bacteria are common in the brains of elderly people in higher numbers than young people. While these organisms are usually dormant, they can ‘wake up’ after stress or if the immune system is compromised. This is particularly so with a type of herpes virus, which about two-thirds of people pick up during their lifetime. A link between herpes and damage to the nervous system has previously been established.

This theory runs counter to the more common medical view that the condition that leads to Alzheimer’s is something that builds-up slowly over time. In the editorial piece the researchers write:

“We refer to the many studies, mainly on humans, implicating specific microbes in the elderly brain, notably herpes simplex virus type 1, chlamydia pneumoniae and several types of spirochatete.”

Based on this, they go onto add: “We propose that further research on the role of infectious agents in Alzheimer’s disease causation, including prospective trials of antimicrobial therapy, is now justified.”

The researchers also add that a gene mutation – APOEe4 – which appears to makes some of the population more susceptible to Alzheimer’s disease, could also increase these people’s susceptibility to infectious diseases.

Speaking with The Daily Telegraph, Professor Douglas Kell of the University of Manchester’s School of Chemistry, expanded further by saying: “We are saying there is incontrovertible evidence that Alzheimer’s Disease has a dormant microbial component. We can’t keep ignoring all of the evidence.” It is important to note that the evidence is not accepted by all scientists. Kell goes onto add that microbial infections may also have a connection with another serious neurodegenerative disease – Parkinson’s disease.

As a counter view, Professor John Hardy, Teacher of Neuroscience, UCL, told the website Journal Focus he was doubtful about the claims: “This is a minority sight in Alzheimer research study. There had actually been no convincing evidence of infections triggering Alzheimer disease. We require constantly to maintain an open mind however this editorial does not show exactly what many scientists think of Alzheimer disease.”

However, another of the researchers, Resia Pretorius of the University of Pretoria, told Bioscience Technology: “The microbial presence in blood may also play a fundamental role as causative agent of systemic inflammation, which is a characteristic of Alzheimer’s disease. Furthermore, there is ample evidence that this can cause neuroinflammation and amyloid-β plaque formation.”

While the jury is still out, and more research is clearly needed, if the case for a microbial link is proven then there may be a case in future for targeting the causative organisms specifically with antimicrobial drugs, and this could halt dementia.

In related news, and as reported earlier on Digital Journal, a review of medical records suggests that it could be possible to transmit Alzheimer’s through certain medical procedures. Here the causative agent is a prion. Prions (“proteinaceous infectious particles”) are types of protein folded in atypical and complex ways.

This article is one of Digital Journal’s Essential Science columns. Each week we explore a topical and important scientific issue. Last week we looked at how neurologists have been considering if our brains could cope with being scrambled and reassembled, in the theoretical process of teleportation. The week before we looked at a species of bacteria, which can cause gum disease, that has been linked with a type of cancer called esophageal squamous cell carcinoma. The finding provides a potential mechanism for early detection.