When Hurricane Hugo hit Puerto Rico in September 1989, Emmanuel Hernandez was only a child. “It took us about two months to get power and 8 months to get water,” said Hernandez, now a DBA Assistant Entrepreneurship professor at Gulf Coast State College in Panama City, Florida.

Professor Hernandez knows first hand the difficulties being experienced on the island, and along with Gulf Coast students, teachers, faculty, the GCSC Enactus Team, Ripples of Change and the nonprofit High Hopes, are working to bring energy and aid to the victims of Hurricane Maria. 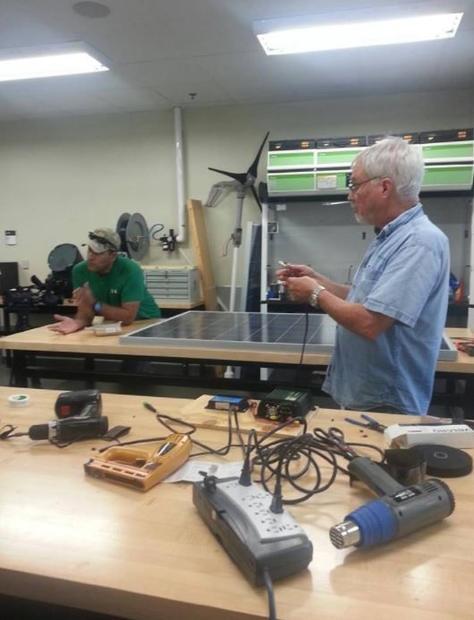 A group of college faculty and students are partnering with the non-profit High Hopes to build solar power harvesters. With just a few items these solar harvesters can be built quickly and at less expense than other pre-built systems.
Enactus- GCSC
Development of a prototype solar power harvester
The college has designed a prototype for a solar power harvester, which will be used to harness power. One harvester can provide about 1.2-kilowatt hours of power under normal conditions. “The design is modular, so we can grow the design to match the use,” volunteer Tom Hoots said. “The idea is to design them for the best they can be for Puerto Rico.”

The solar harvester needs to be able to run medical equipment, like breathing machines or CPAP machines. “We need enough storage value in it to do that. The other will be a more residential model designed to run a fan and a small refrigerator,” Hoots added. 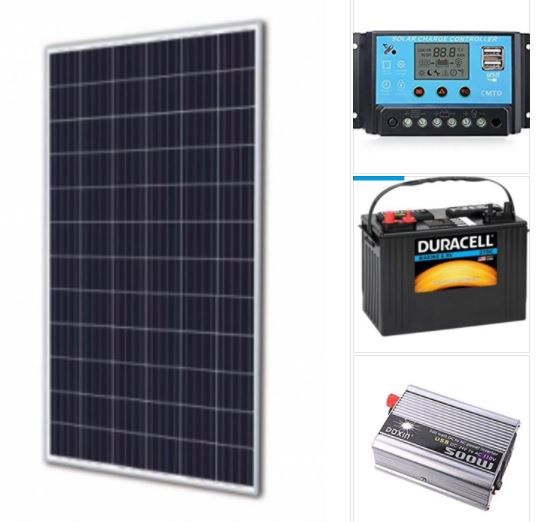 The items being used for the solar harvester are easy to find and set up. What a great idea!
Enactus-GCSC
“One of the biggest problems you’ll find in children is asthma. We got some calls with people that pretty much they’re using their insulin with no refrigeration,” Professor Hernandez said. “That’s the kind of need we want to solve. We don’t want to provide luxury we just want to provide the basic needs they need from a power perspective.”

The college is well on its way to realizing the goals they have set forth. They plan on having 100 solar generators ready by October 15.

Flower-grower in Puerto Rico has power
Flower-grower Hector Santiago is already back in business because of solar panels powering his 40-acre (16.2-hectare) nursery in central Puerto Rico. Santiago’s decorative plants and poinsettia nursery in the Barranquitas farming area was damaged by Hurricane Maria, but because of his $300,000 investment in 244-solar panels six years ago, he and his 19 employees are back to work. 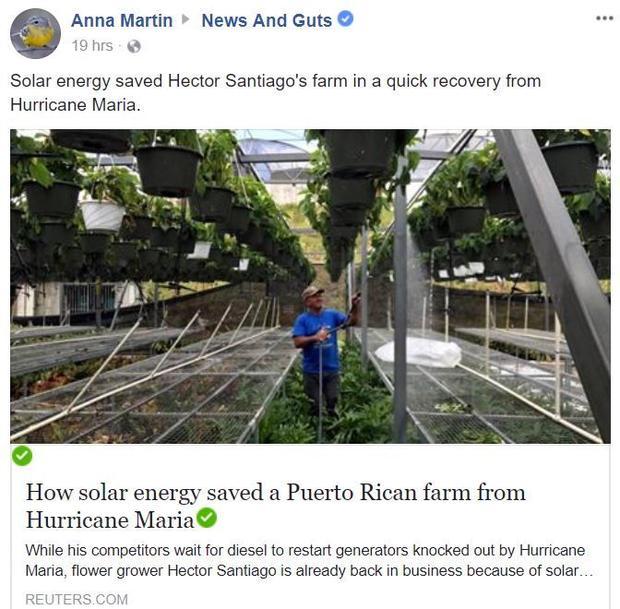 Anna Martin
“Everybody told me I was crazy because it was so expensive. Now I have power and they don‘t,” Santiago told Reuters. Santiago’s flowers are sold in Puerto Rico, at outlets like Costco, and throughout the Caribbean.

Politicians and average citizens have taken notice of Santiago’s success with solar power, and he hopes more people will see its advantages over the inadequate and antiquated system now being used on the island. Henry Pichardo has a solar installation business in the city of Bayamon.

He has already been inundated with inquiries and thinks he will see his business increase by 20 percent this year. “People are going to become more conscious of how they are living, and invest more in solar,” he said.